I read something today that I found intriguing.  There are only three types of gravescapes that have been in use in the United States since the 1700’s.  During the colonial period it was graveyards, with most attached to churches and known more for their efficiency of task than their modest memorials.


Then, at the beginning of the nineteenth century, rural or garden cemeteries came into vogue.  Here was a place to ‘take the air.’  A genteel way to see and be seen.  It was a chance to escape from the dirt and noise of the city for a few hours and enjoy a contemplative stroll among exquisite sculpture, interesting architecture, and acres of rolling hills and valleys.  A ‘rural’ cemetery was not just a place in the country to bury your dead; it was an attraction, a landscaped area that appealed to those nineteenth century traits of nostalgia, melancholy and romantic sensibility.
Then, with the twentieth century, came the lawn cemetery; everything kept low and confined.  They’re easy to build, easy to tend, and easy on the eye – if not a bit mundane.
I, for one, am a big proponent of the rural cemetery. These are the cemeteries I love to wander in; where you set off to explore one area and end up a mile away, having never realized how far you’d traveled, too caught up in the sites and sounds of this quiet, peaceful world. Where the structure of a mausoleum is more dramatic and pronounced than your child’s school or your place of worship.  Where entire life stories are told with just a few stones, some symbols and a statue.  We lost an interesting connection between life and death, a sharing of two worlds, when we stopped erecting sculpture depicting family weeping at the gravesite, obelisks soaring to the heavens, and empty benches awaiting a visitor. 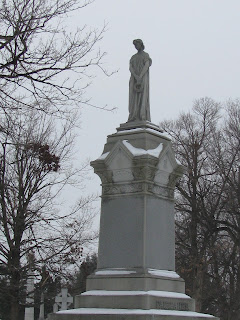 So, one of my goals this year, is to visit several rural-garden cemeteries.  Many that are not well known and three that are, including Woodland in Dayton, Ohio, Cave Hill Cemetery in Louisville, Kentucky and Crown Hill Cemetery in Indianapolis.  What better place to explore and enjoy such ‘A Grave Interest’ than in a rural cemetery!

Posted by Joy Neighbors at 5:16 PM