Burl Icle Ivanhoe Ives died sixteen years ago yesterday, on April 14, 1995.  He was known as one of America's most beloved folk song singers.  Ives was born on June 14th, 1909 in Hunt City Township, located in Jasper County, Illinois.  Ives was the son of Levi “Frank” Ives and Cordelia “Dellie” White Ives.  The migrant farming family had a musical bent.  Ives and his six brothers and sisters were taught English, Irish and Scottish folk songs while growing up.
Ives attended Eastern Illinois State Teachers College (now Eastern Illinois University,) in Charleston for three years before dropping out in 1930.  He decided that he would be happier wandering the country playing his banjo and singing ballads, than attending school.  Years later EIU would unveil the Burl Ives Art Studio Hall on campus, a tribute to their famed dropout.
During the 1930’s, Ives was jailed in Mona, Utah for singing a ballad called 'Foggy, Foggy Dew.' Officials of the town felt the lyrics were too risqué to be sung in public.  Ives continued to wander around the country, singing and performing in summer stock. In 1940 he ended up with his own radio show called ‘The Wayfaring Stranger' on CBS affiliate, WBOW radio station in Terre Haute, Indiana.  He also began attending Indiana State Teachers College (now Indiana State University) in Terre Haute.  {Years later, when I worked at WBOW, Burl Ives stories were still favorites for the old-timers to tell.}
In 1942, Ives was drafted into the Army and joined the cast of Irving Berlin’s musical, ‘This is the Army.”  He was honorably discharged in September 1943 due to health reasons.  From there, Ives moved to California, where he met and married Helen Peck Ehrlich.  They had one son, Alexander, born in 1949, the same year Ives had his first major hit song with his rendition of ‘Lavender Blue' a 17th century ballad.
Ives went on to appear on numerous radio and television programs of the 1950’s.  He also appeared in several films and on Broadway.
He won an Oscar for Best Supporting Actor in 1958 for his portrayal of Big Daddy Pollitt in the film ‘Cat on a Hot Tin Roof.’  He also won a Golden Globe Award for the same film. In 1959, he garnered a Golden Globe and an Oscar for Best Supporting Actor in ‘The Big Country.’
He had three folk ballads that made the top ten list in the U.S.
They were ‘On Top of Old Smokey’ – 1951 (#10),
‘A Little Bitty Tear’ – 1961 (#9)
And 'A Funny Way of Laughin’ – 1962 (#10), which won him a Grammy.
IIves is best remembered by my generation as Sam the Snowman, the narrator in Rankin/Bass’s 1964 animated holiday TV special, Rudolph the Red-Nosed Reindeer.  Sam’s animated character bore a striking resemblance to Ives, complete with pipe.  In this program, he made popular two holiday classics, ‘Silver and Gold’ and  ‘Holly Jolly Christmas.’  Both songs are still receiving airplay every Christmas, 47 years later. Rudolph has been broadcast every year since it’s debut in 1964, making it the longest running Christmas TV Special.

In 1971, Ives married Dorothy Koster Paul and gained three stepchildren.  A lifelong Mason, he was elected a Grand Cross by the Supreme Council in 1993.  The Grand Cross embalm was engraved on his monument.
In a quote from the Burl Ives website, http://www.burlives.com/
Ives said, “The way I figure it, when I die I'll simply be changing a raincoat, moving on to another level of energy, because I'm confident that energy never dies. If a piece of wood will never die, this bouncy thing called Burl will never die as well.”
During the summer of 1994 Ives, a lifelong cigar and pipe smoker, was diagnosed with oral (mouth) cancer.  Burl Ives died on April 14, 1995 in Anacortes, Washington.  He was 86 years old.  He was buried in Mound Cemetery, just east of Newton, Illinois, in his home county of Jasper.  Liz Hartrich-Goss of Newton, Illinois did the etching of Ives that is on his monument. 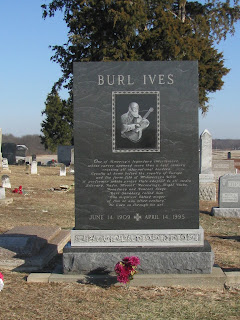 The inscription on Burl Ives monument reads:
One of America’s legendary entertainers,
whose career spanned more than a half-century
crossing all international borders.
Equally at home before the royalty of Europe
and the farm folks of Midwestern USA.
A performer whose unique style adaptd to all media
Literary, Radio, Movies, Recordings, Night Clubs,
Broadway and Concert Stage.
Carl Sandburg called him
“The mightiest ballad singer
Of this or any other century.”
He lives on through his art.
June 14, 1909 – April 14, 1995 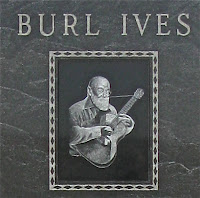 Ives once said of his craft, "Ballad singing has been going on ever since people sang at all. It comes up like an underground stream and then goes back again. But it always exists!”
All I can say is  Play is again, Sam - (the Snowman : )
~ Joy
Posted by Joy Neighbors at 7:00 AM