The Start of the Civil War 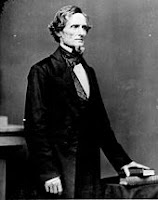 Today marks the 150th Anniversary of the beginning of the Civil War. The conflict between northern and southern states had been brewing for over ten years.  In February of 1861, seven southern states withdrew from the United States and formed the Confederate State of America with Jefferson Davis as their president. 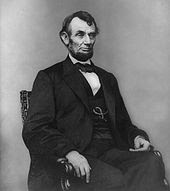 Twenty Union states supported the U.S. Federal government and acknowledged Abraham Lincoln as President of the United States of America. 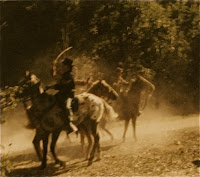 The War Between the States, also known as the War of the Rebellion, the War for Southern Independence, and the War Between the North and South, officially began on April 12, 1861 when Confederate forces attacked a U.S. military installation at Fort Sumter in Charleston County, South Carolina.  After this battle, four more southern states would secede and men from both regions of the country would begin enlisting by the thousands. 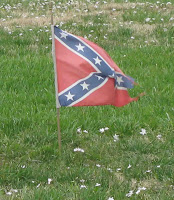 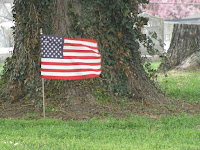 There were numerous reasons given for the Civil War.  Those included the social and economic differences between the northern and southern states, the election of Abraham Lincoln, states’ rights verses federal rights, and slavery and the Abolitionists Movement. 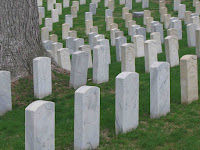 The Civil War lasted four years.  During that time over 210,000 men died, fighting for their beliefs. 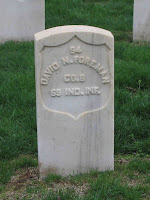 In all, 140,414 Union soldiers were killed in action, with a total of almost 365,000 Union dead from the war.
For the Confederacy, 72,524 were killed in action, with fewer than 260,000 Confederates killed during the entire war.
The first national order to mark military men’s graves came in 1861 from the War Department.  After the war, uniformly designed stones for the Civil War dead were erected. 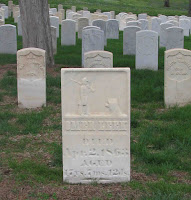 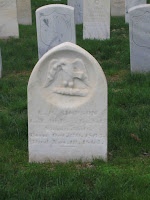 Private stones could also be placed and might differ significantly from the standard curved top, white marker seen in military and national cemeteries throughout the U.S.  Inscriptions on the stones could vary.  Most showed a name, along with the unit served in and a death date.  More details might include rank, military decorations or religious emblems. 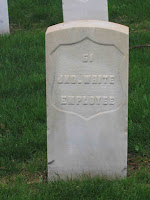 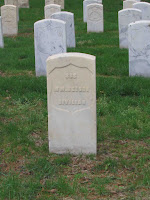 It is interesting to note that stones marked ‘citizen’ or ‘civilian’ were actually markers for escaped slaves who fought on the Union side. They were known as ‘contraband’ during the war.  The markers for Union African-American troops have the designation ‘USCT’ over their names.  This stood for United States Colored Troops. Civilian employees of the U.S. Army were also buried in the military cemeteries. 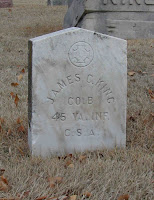 Many Confederate tombstones have a peon or pointed top.  Legend has it that Confederate soldiers joked about the pointed tops, saying that it would “keep the Yankees from sitting on them.” 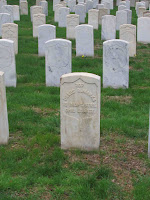 The first National Cemeteries were created after the Civil War by Edmund B Whitman as a way to honor the war dead.  There are now 146 National Cemeteries in the United States, at least one in each state in the country, with the best known one at Arlington, Virginia, near Washington D.C.
On the back of the Confederate Monument at Arlington National Cemetery there is an inscription attributed to Reverend Randolph Harrison McKim, a Confederate Chaplin.  It reads:
Not for fame or reward
Not for place or for rank
Nor lured by ambition
Or goaded by necessity
But in simple
Obedience to duty
As they understood it
These men suffered all
Sacrificed all
Dared all – and died. 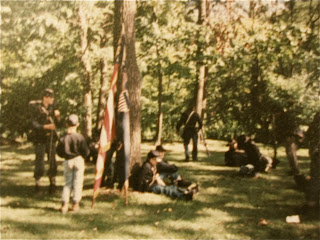