Devoted Pets and the Cemeteries They Inhabit - Part 2

This week is National Pet Week.  In keeping with Tuesday’s blog about pets in the cemetery – here are two more tales of true devotion.

Johnny Morehouse & his dog – Woodland Cemetery, Dayton, Ohio
One of the most famous and often visited sites at Woodland Cemetery in Dayton, Ohio is the grave of Johnny Morehouse.  In  1860, Johnny lived with his parents, John Morehouse, a cobbler, and Barbara, his mother, along the Dayton Canal, which ran through the center of the city.  While playing near the canal one day, five-year-old Johnny fell in.  His dog, whose name has been lost to the ages, jumped in to save him.  When the dog pulled Johnny from the water, he had already drowned.  Johnny’s constant companion was inconsolable.  Legend has it that after Johnny was buried; his dog took up guard at his grave.  Visitors would bring the dog food and water because he would not leave his master's grave.
Noted Dayton sculptor Daniel LaDow carved the marble tombstone of Johnny and his faithful dog.  It portrays Johnny under the protective guard of his faithful dog, who watches over him in death as he did in life.  The statue bears no dates, just the words “Slumber Sweet” on the side and “Johnny Morehouse” on the front.  LaDow also carved what was found in Johnny’s pockets when he died; a ball, a top, a cap and a mouth harp (harmonica,) all resting near him.
Victorians also used these types of symbols to indicate the premature end to a child's life. 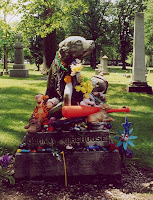 Cemetery visitors still bring presents and toys for Johnny, and occasionally a new collar or memento for his devoted dog.  Sightings have been reported through the years of Johnny and his dog playing together in the cemetery.  At times, just before nightfall, Johnny’s laughter can be heard ringing through the grounds, along with the happy barking of his very best friend.
Location:   Woodland Cemetery and Arboretum, Plot section: 82, Lot 546, Dayton, Ohio.
~
And just in time for the start of horse racing’s Triple Crown tomorrow, here’s the story of an exceptional horse and his longtime companion.
Will Harbut & Man o’ War, Kentucky Horse Park, Lexington, Kentucky
The Kentucky Horse Park in Lexington, Kentucky is a twelve hundred acre working horse farm, with a world-class equestrian competition facility where over 15-thousand horses take part in various competitions each year.  This is also the resting place of the most famous Thoroughbred of the Twentieth Century - Man o’ War.
He was born March 29, 1917 at the Kentucky Nursery Stud farm, owned by August Belmont, Jr.  One of almost 17-hundred Thoroughbreds foaled that year, he was named “My Man o’ War” by Mrs. Belmont in honor of her husband who would be going off to fight in France during World War One.  One year later, the high tempered yearling was sold at the Saratoga Sales in New York.
Purchased by Pennsylvania horseman, Samuel Riddle for $5,000, trainers hoped that ‘Big Red” as he was called off the track, could be trained as a racehorse.  His instincts and intelligence made him a fast learner.  On June 6, 1919, Man o’ War won his first race, with Johnny Loftus as the jockey.  According to legend, at the completion of that first race a spectator asked a groom who Man o’ War was sired by.  The groom replied, “He’s by hisself and there ain’t nobody gonna’ get near him.”
The groom’s words were prophetic.  Except for Man o’ War’s sixth race, which he lost to a horse named Upset, he won them all and went on to be named Horse of the Year for 1919 and 1920.  As a three-year-old, he was ridden by jockey Clarence Kummer.  He stood 16.2 hands high and had a stride of 28 feet! All told, Man o’ War won 20 out of 21 races in his career and nearly 250-thousand dollars in purses – the leading money winner of his time.  Kummer was the top money-winning jockey in the U.S. for 1920.
Although he was extremely favored as a possible winner, Man o’ War was not entered in the Kentucky Derby because Sam Riddle didn’t like racing in Kentucky and believed it was too early in the year for the horse to run a mile and a quarter. Man o’ War did win the Preakness Stakes in Maryland, breaking a track record.  He also won the Belmont Stakes in New York, setting another record time.  All told, he broke 5 American racing records that year.  At the end of the racing season in 1920, Man o’ War was retired from racing.
“Big Red” was taken to Faraway Farm near Lexington to become a stud horse. Groom/Trainer  Will Harbut was put in charge of him and a life-long friendship began between man and horse.  “Big Red” became one of the top-breeding stallions in the nation, siring over 60 champions, including Horses of the Year - Crusader and War Admiral. War Admiral won the Triple Crown in 1937.  Man o’ War was also the grandfather of American horse legend, Seabiscuit.  Harbut and “Big Red” became inseparable friends.  They led tours and entertained over one million visitors to Faraway Farm.  Harbut told engaging stories about Man o’ War and his life, on and off the track.  “Big Red” and Harbut graced the covers of several magazines during the 30’s and early 40’s.  Both enjoyed performing before the crowds, each seeming to instinctively understand what the other needed or wanted.
Then on October 4, 1947, Will Harbut died of a heart attack.  In Harbut’s obituary he was listed as being survived by “his wife, six sons, three daughters and Man o’ War.

It was rumored that Man o’ War grieved himself to death.  After Harbut’s death, the spark went out of the horse.  He died just 4 weeks later on November 1, 1947 at the age of 30 of an apparent heart attack.  He was the first horse to be embalmed, and his casket was lined in his riding colors.  Man o’ War’s funeral was broadcast internationally over the radio and over 2,000 people came to pay their final respects.  Thousands more sent their condolences.  The most famous Thoroughbred in the world had touched people deeply.   Owner Sam Riddle had commissioned artist Herbert Haseltine to sculpt a life-size bronze statue of Man o’ War in 1934. It was now placed on the horse’s grave at Faraway Farm.

In 1977, Man o’ War, along with several of his offspring, were moved to the newly established Kentucky Horse Park and reburied at the Man o’ War Memorial.   Will Harbut’s family refused the request to place Harbut’s remains alongside the horse he loved, but a plaque next to the statue describes the bonds of affection that man and horse shared.
Locations:
Will Harbut, Maddoxtown Baptist Church Cemetery, Maddoxtown, Kentucky
Man o’ War, Main Gate, Kentucky Horse Park, 4089 Iron Works Pike, Lexington, Kentucky
If anyone knows of a heroic/legendary pet story, please let me know.  I could not find anything in my searches about cats, and only one bird turned up, but the cemetery would not comment.
~  Joy
Posted by Joy Neighbors at 6:00 AM