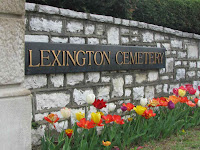 Lexington Cemetery, located in Lexington, Kentucky, is the second largest cemetery in the Commonwealth of Kentucky.  It is a private, non-profit cemetery, comprised of 170 acres with over 64,000 buried there.  Cemetery officials estimated that this amount of land should enable the cemetery to continue burying for at least two centuries. 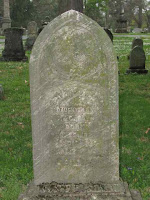 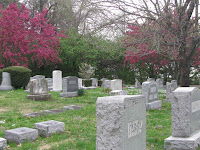 It is believed that the cholera epidemic was a driving force in getting the city fathers to consider creating a cemetery away from where the main population lived.   The cemetery was incorporated in 1848.  Architect Julius Adams designed the cemetery in the Gothic Romanesque style as a ‘rural cemetery,’ with natural wooded areas and lakes in a park-like setting.
The first plot was sold in August 1849 for the interment of Lexington businessman, Robert S. Boyd who had died of cholera.  Boyd had been buried in the Episcopal Cemetery, but was moved to Lexington Cemetery on October 2, 1849 and laid to rest there, along with his infant son.  By the end of 1850, almost ninety burials had taken place, including the reinterrment of several who had been buried in other community graveyards.
In 1849, bids were gathered for the construction of a central cemetery entrance gateway and buildings.  In all, almost $3,000 was spent for the three arched stone and iron gateways, which were flanked by a reception room and office.  Above the east gate, the inscription read, “Lexington Cemetery, Founded A.D. 1849.”  Over the west gate was carved, “City of the Dead.”
There are many notables buried in Lexington Cemetery. Among the numerous politicians, authors, businessmen, and sports figures, lie some of history’s famous.
Henry Clay, known as “The Great Compromiser,” is buried here.  Clay served as a lawyer, U.S. Congressman, Senator, and U.S. Secretary of State.  He ran for President three times but was unsuccessful in his bids. Clay died June 29, 1852 in Washington, D.C.  His body was born 1,200 miles back to Lexington by train, barge and carriage.  His friends and fellow politicians worked diligently for the next five years in order to purchase, what they felt was, a suitable monument, at the cost of $43,920, to be erected for Clay.   The cornerstone was laid on July 4, 1857 and the monument was completed in 1861.  Clay’s body was not moved to the new monument due to the start of the Civil War.  But three years later, both his and his wife’s bodies were interred there in 1864.  The Clay monument is the only marker in the cemetery’s Section M.
John Hunt Morgan, well-known Confederate General of the Civil War, is also buried here.  Morgan is best remembered for Morgan’s Raid, where he led his men, on horseback, over 1,000 miles, from Tennessee, through Kentucky, into Indiana, and over into southern Ohio.  This was the farthest point north any uniformed Confederate troops ever reached during the war.  Captured and held in a federal prison in Ohio, Morgan managed to escape by tunneling out. He was shot and killed September 4, 1864 during a raid in Tennessee.
Although not rich with wealth, William “King” Solomon showed his mettle during the cholera outbreak. Over 500 Lexington residents died in eight weeks during the 1833 epidemic.  While the majority of the city fled, Solomon, an indentured servant, stayed of his own accord.  He dug graves for the victims for over two months, working during the day and sleeping in the cemetery at night. It is said that the following autumn, Solomon was sitting in the back of a courtroom, awaiting the proceedings, when the presiding judge stepped down from his bench and approached him.  The judge reached out and shook his hand as a manner of thanking him for his service to the city during the epidemic.  No sooner had the judge turned, than the entire room lined up to express their appreciation as well.  Solomon had been recognized for his valor in the face of death. 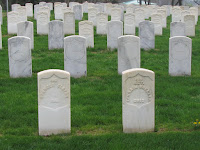 Lexington Cemetery is the site of two military monuments and a National Cemetery.  The Confederate Soldier Monument was placed on the National Register of Historic Places in 1997 as part of the Civil War Monuments of Kentucky.  It depicts a Confederate soldier looking off, as if in thought. The names of the Confederate dead on inscribed on the base.
Behind this the Ladies Confederate Memorial is located.  It was erected in 1874 and also placed on the National Register of Historic Places in 1997.  This monument touches you and seems to sum up the heartache and sorrow felt for all who died for the Confederacy during the war.  Designed by George W. Ranck, of Lexington, the monument shows a draped marble cross, surrounded by a broken sword, a broken flagstaff and lilies. It is believed that the monument was inspired by Confederate Chaplin, Father Abram Joseph Ryan who wrote this poem:
The Conquered Banner
Furl that banner, softly, slowly!
Treat it gently – it is holy –
For it droops above the dead.
Touch it not – unfold it never.
Let it droop there, furled forever,
For its people’s hope are dead!
~ Abram Joseph Ryan 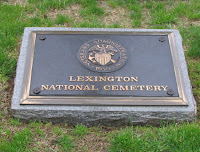 A paper found in the front of one of the cemetery interment books states that between October 4, 1861 and July 26, 1865, there were 828 U.S. white volunteers, 40 U.S. colored Volunteers and 97 disloyals buried here.  Another 965 Union dead were also interred in the Union section of the cemetery. After the war, the U.S. government purchased an adjoining 16,111 feet in the Union cemetery and had the area designated as a national cemetery.  The Southern section was released to the Confederate Veterans Association in 1891.  The CVA purchased another 510 square feet of land in 1892.  Two more lots were purchased bringing the total of the Southern section to 853 square feet.  All sections in the national cemetery are now filled and no new burials are allowed here.
The Lexington Cemetery offers assistance with genealogical research.  The web page has a section for researchers at http://www.lexcem.org/index.cfm/genealogy.html.   It tells how to request help and how to schedule an appointment.  Anyone with information they would like to have added to the cemetery’s genealogical files should contact them. 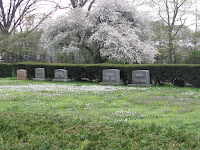 The Lexington Cemetery also has the designation as an arboretum with over 200 species of trees.  Self-guided tree walks can be conducted with the assistance of maps available at the cemetery office.  This is a cemetery that changes dramatically with each passing season and can be enjoyed anew every few months. 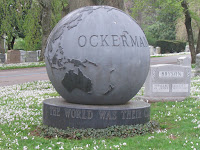 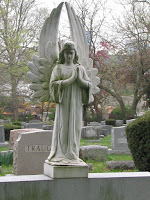 There are numerous markers and stones throughout the cemetery that will captivate you, and all have a story to tell.  Be sure to grab a map when you enter and take your time when wandering among the stones.  There are hidden jewels everywhere!  Take the opportunity to search for them. 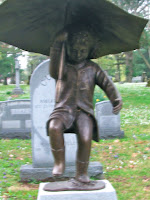 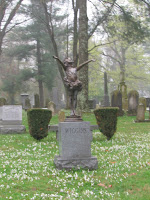 Adventure abounds in the Lexington Cemetery.  It is a perfect example of a ‘rural cemetery,’ one where nature blends seamlessly within the city.  If you plan on visiting, take the day to enjoy it.  There is so much to see and do, you’ll be glad you did!