Cemeteries Worth the Visit– Frankfort, Kentucky

The Frankfort Cemetery, in Frankfort, Kentucky is visible from anywhere in the town.  Located on a bluff, it overlooks the City of Frankfort, with views of the State Capitol building, and Kentucky River. The rolling lands and vistas are gorgeous, no matter what time of year you visit. 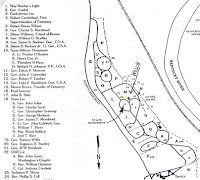 Judge Mason Brown, Edmund Taylor, A.G. Hodges, Henry Wingate, Jacob Swigert, A.P. Cox, Philip Swigert, Orlando Brown and M.R. Stealey incorporated the cemetery on February 27th, 1844.  Approval for incorporation was granted by the Kentucky General Assembly.   In 1845 thirty-two acres were purchased from Ambrose and Eliza Dudley for $3,801.  The land, at the time was known as Hunter’s Garden.  In 1858 and again in 1911, more land was purchased, to account for the current total of 100 acres in the cemetery. The Frankfort Cemetery was the second cemetery to be incorporated in the United States.

Scottish landscape architect Robert Carmichael was hired to design the cemetery in the Romanesque style similar to Mount Auburn Cemetery in Boston.  Carmichael designed curving lanes and incorporated flowers not usually found in the region to create a garden style cemetery.  He terraced certain areas to overlook the gorgeous views of the Kentucky River.  Carmichael died in 1858 and is buried here. 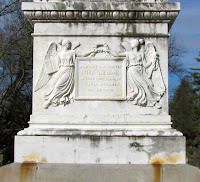 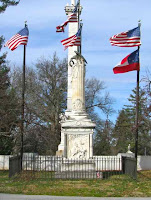 In 1848, $15,000 was appropriated to build a monument to those who died in defense of the country during the Civil War. The State Mound designed by Russian-American sculptor Robert E. Launitz.  Most of the intricate carving was done in Italy and then shipped to Frankfort up the Mississippi. The military memorial is located on a twenty feet square granite base in the center of the cemetery.  The Statue of Victory tops the monument and four eagles guard each of the four corners.

In 1890 a Romanesque Revival chapel was built on a hill overlooking the Kentucky River and Frankfort.  Painted a pale mauve, it blends in with its surroundings, regardless of the time of year.

The most visited gravesite is that of frontiersman Daniel Boone, but the infamous question is if Daniel Boone is actually buried here?  Boone died in Missouri on September 26, 1820.  He was buried next to Rebecca, his wife, at what is now Marthasville, Missouri.  The Boone’s remains were supposedly disinterred by family in 1845 and moved to the new Frankfort, Kentucky Cemetery.  But Boone’s relatives in Missouri were not pleased when Kentucky kinfolk came to take the remains South. Legend has it that they allowed them to exhume the wrong bodies to take back to the Bluegrass State.  It has never been proven if Boone and his wife were really moved back to Kentucky, or if they remain in Missouri. 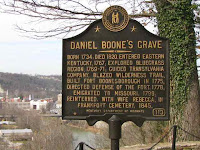 Regardless, a large monument stands in the Frankfort Cemetery with four panels that depict Boone’s life in Kentucky.  The southern panel depicts Boone in a fight with Indians, one has been killed and one is ready to attack.  The panel on the eastern side shows Rebecca Boone milking a cow.

On the northern panel stand a man and boy, said to represent Boone
telling the boy where he wanted to be buried.  And the panel on the western side shows Boone sitting by his cabin with a slaughtered deer at his feet.

Other notable people buried here include Impressionist artist, Paul Sawyier, Vice President Richard M. Johnson, and Theodore O’Hara, poet of The Bivouac of the Dead which is quoted in numerous cemeteries at war memorials. 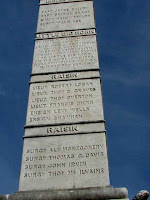 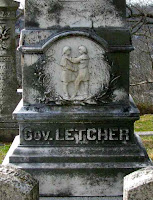 The cemetery also contains the graves of seventeen state governors, those massacred at River Raisin during the War of 1812, three national poets, and many military officers and soldiers from the Civil War, the War of 1812, the Mexican War and numerous other conflicts.

Wind and storm damage on this high bluff over the years, has damaged or destroyed many of the huge, older trees.  The Frankfort Cemetery completed a tree and garden replacement program in 2010, where over 500 trees were planted.  Over eighty-five different tree varieties were selected, with 60 of those being native Kentucky species.  The donation cost to sponsor a replacement trees ranges from $300 to $600, and a memorial plaque is included. 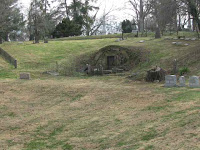 The Frankfort Cemetery can be found on Facebook at http://www.facebook.com/pages/Frankfort-Cemetery/166030506756088?v=info&sk=info

With the gorgeous views, ample history, and beautiful landscapes, the Frankfort Cemetery is well worth the afternoon of any Tombstone Tourist!