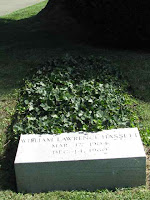 Cemeteries abound with flowers, trees and plantings – all manner of living things with which to remember those who have passed.  It is not unusual to come across a grave or two that is covered in ivy.  In older cemeteries, especially Victorian and Rural Garden cemeteries, ivy was a perpetual favorite, blanketing many graves, both carved in stone and living plants. It has been said, "Ivy still mourns when others have forgotten the dead."

Ivy symbolizes many attributes.  Among them are friendship, affection, faithfulness, strength, and immortality.  The Celts viewed ivy as an omen of death and spiritual rebirth. The Druids associated ivy with strength and determination. Ivy grows in twists and turns, providing a strong, durable bond to all that it touches. In the Christian religion, ivy is a symbol of Christmas and rebirth. 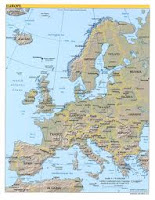 The ivy plant is native to Europe and grows naturally in cemeteries throughout England.  Although a pretty vine, ivy has a reputation of causing harm to gravestones, brick walls, and trees. 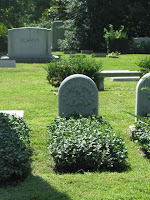 Recent studies conducted in Europe indicated that the climbing roots of the ivy did not damage solidly mortared walls.  Research also showed that ivy actually protected walls and cemetery stones from further damage caused by the effects of weathering, drastic temperature changes and pollution. 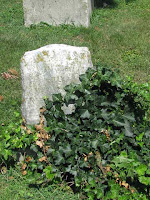 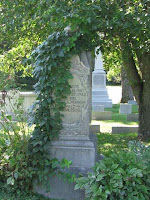 In the U.S., problems have proven to be more significant since ivy does not have any natural enemies to control its growth.  American trees are overwhelmed by ivy and die due to disease or aggressive ivy growth.  We Americans transplanted ivy to our cemeteries during the Victorian age as symbols of immortality.  In many cases the ivy has proven to be very durable by taking over tombstones and graveyards.

Cemetery restoration groups will leave an ivy vine as part of the original planting, as they work to maintain the status of the burial grounds and the tomb stones.  But cemeteries throughout the country have implemented management control procedures to deal with ivy and it’s potential damaging effects on monuments and stones.  Many will no longer allow ivy to be planted. 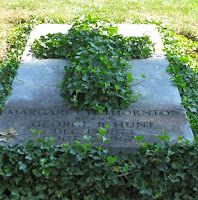 As intended by those who originally planted it, ivy lends a shot of color onto the otherwise dark and drab winter cemetery grounds, and gives us hope for renewal and immorality.

In 1836, Charles Dickens wrote a poem that appeared in his novel Pickwick Papers about the ivy:

Oh, a dainty plant is the Ivy green,
That creepeth o'er ruins old!
Of right choice food are his meals, I ween,
In his cell so lone and cold.
The wall must be crumbled, the stone decayed,
To pleasure his dainty whim: 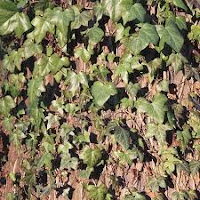 And the mouldering dust that years have made
Is a merry meal for him.
Creeping where no life is seen,
A rare old plant is the Ivy green.

Fast he stealeth on, though he wears no wings,
And a staunch old heart has he.
How closely he twineth, how tight he clings 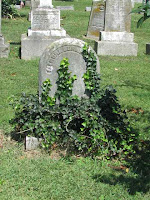 To his friend the huge Oak Tree!
And slyly he traileth along the ground,
And his leaves he gently waves,
As he joyously hugs and crawleth round
The rich mould of dead men's graves.
Creeping where grim death hath been,
A rare old plant is the Ivy green.

Whole ages have fled and their works decayed,
And nations have scattered been;

But the stout old Ivy shall never fade,
From its hale and hearty green.
The brave old plant, in its lonely days,
Shall fatten upon the past:
For the stateliest building man can raise
Is the Ivy's food at last.
Creeping on where time has been,
A rare old plant is the Ivy green.
~ Charles Dickens