A Closer Look at Prostitutes in the Cemetery

March is ‘Women’s History Month’ and it seems an apt time to remember those women who were shunned in life and forgotten in death – the prostitutes.

Fallen Women, Soiled Doves, Unfortunates, – prostitutes have carried hundreds of monikers throughout the ages.  Always living on the B-side of life, they have been neglected, abused, even murdered for being too accessible, too easy – their trademark. And as in life, prostitutes have not fared any better after death.

Ostracized by society and considered to be impure and immoral, most private and religious cemeteries would not allow prostitutes to buried among the sanctified and moral.  Many times, public cemeteries would agree to take them only to place them in paupers graves, unmarked and unremembered. 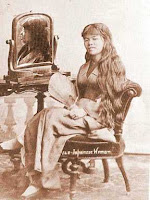 In Singapore, during the close of the 19th century, researchers estimate that close to one-thousand Japanese peasant girls, some as young as 13, were tricked and sold into a life of prostitution, known as karayuki-san. They were taken to Singapore to service immigrant laborers working on plantations and in mines.

The girls died, many times at the hands of clients, or committed suicide due to abuse by their handlers, or because of the lose of money due to ageing. These prostitutes were buried at the Japanese Cemetery Park, land that was donated by brothel owner Tagajiro Fukaki for destitute women.

During WWII Japanese soldiers and civilians who were ill were also buried in the Japanese Cemetery Park. Over 900 graves are located there. Though most of the prostitutes’ remain nameless, it is said that all of their graves face the same direction, away from their homeland of Japan. 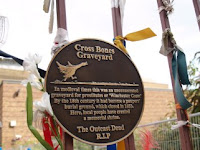 In England, Cross Bones Graveyard is another such place.  During the 1500’s it was established as an unconsecrated graveyard for “single women.”  Women working this area were also known as Winchester Geese since they were licensed by the Bishop of Winchester to work within this jurisdiction just outside of London.

The age of the graveyard is not known. John Stow first referred it to in 1598 in his Survay of London where he wrote,
“I have heard of ancient men, of good credit, report that these single women were forbidden the rites of the church, so long as they continued that sinful life, and were excluded from Christian burial, they were not reconciled before their death. And therefore there was a plot of ground called the Single Woman's churchyard, appointed for them far from the parish church."
By 1769, the Single Woman’s Churchyard had become a pauper’s cemetery. 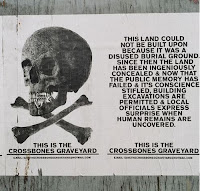 In 1853 the graveyard was closed because there was no more room for burials. It is believed that over 15,000 people were buried there.  In 1883, the cemetery was sold for a building site but after complaints were made, the sale was ruled null and void.

The Cross Bones Graveyard now has a plaque on the gates for “The Outcast Dead.” A local group, known as the Friends of Cross Bones, is currently working on getting a permanent memorial garden in place. Every Halloween, they hold special events and processionals to remember those buried here.  The gates of the cemetery are always decorated with messages, flowers and ribbons in remembrance to those unfortunates of the past.

In some countries, and in some religions, prostitutes would establish their own cemeteries.  There, others of the same profession would tend the graves and mourn the dead, since no one else felt them worthy of such attention.

It is not our place to judge them; we do not know how or why they led these lives.  Even in the twenty first century, the sex slave trade still exists.  Thousands of nameless, faceless women continue to be banished from society, living on the outskirts of humanity, to be exploited, abused; to die and be buried, forgotten, in unmarked graves.