He was born William Harry McCarty, Jr.  in New York City on November 23, 1859.  McCarty grew up in the slums, but moved with his mother to New Mexico Territory when he was 14.  In 1877 he moved to Lincoln County, New Mexico under the assumed name William H. Bonney.

Billy worked as a cattle guard for John Tunstall, an Englishman who was a cattle rancher, banker and merchant in Lincoln.  A conflict, known as the Lincoln County War, erupted between Tunstall and the other merchants in town who did not want the Englishman doing business there.  The group of local merchants took it upon themselves to get rid of Tunstall.  He was ambushed and murdered by the sheriff, William Brady, and four of his men in February 1878.  Evidence showed that Tunstall had tried to avoid a confrontation before being gunned down.

Tunstall’s men vowed revenge and formed their own group known as the Regulators.  On April 1, the Regulators, including Billy the Kid, ambushed Sheriff Brady and his deputy George Hindmen on Lincoln’s main street.  Both the sheriff and deputy were killed.

Billy agreed to testify against the corrupt district attorney, John Dolan, in exchange for amnesty in the killings.  Although Billy's testimony helped to convict Dolan, the agreement for a pardon was ignored and Billy was jailed.  He escaped with the help of a friend and spent the next couple of years as a gambler, rustler, and general outlaw.  McCarty became known as Billy the Kid when a reporter gave him the moniker because he was so young looking. 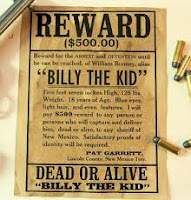 It is said that Billy the Kid killed 21 men, although it is believed that the number was actually less than 10. New Mexico Governor, Lew Wallace placed a bounty of $500 on his head, dead or alive.

Billy McCarty was captured on December 23, 1880, by the new Lincoln sheriff, Pat Garrett.  On April 9, Billy was tried, convicted and sentenced to hang for the murders of the former sheriff and deputy. On the evening of April 28, 1881 as Billy was being returned to his cell, he grabbed the jailer’s gun and shot him dead.  He also gunned down another guard before escaping on horseback.

In July, Garrett was tipped off that Billy was hiding out at Old Fort Sumner.  Sheriff Garret called on two of his deputies and set out for the fort, about 150 miles away.

When Garret arrived one evening he went in search of an old friend, Pete Maxwell.  As he and Maxwell were talking, Billy the Kid entered the darkened room; not realizing the sheriff was there.  Garret recognized Billy and fired. Billy the Kid died in the early morning hours of July 14, 1881.  He was buried later in the day at the Old Fort Sumner Cemetery between two of his friends, Tom O’Folliard and Charlie Bowdre. He was 21 years old.

One hundred twenty nine years later, in 2010, William McCarty aka Billy the Kid was to be granted a pardon by Bill Richardson, Governor of New Mexico.   It was to be a final make-good on the promise made by then Governor Lew Wallace in 1879, and a parting gesture by Richardson as he left office.  But an Albuquerque attorney petitioned the pardon and Richardson left office without granting it.

At Old Fort Sumner Cemetery, the spot designated to be Billy the Kid’s grave is covered with reinforced concrete.  His pointed footstone is held in place with an iron shackle.  But oddly enough the exact location of his body is not known.  The wooden cross that marked his original grave was washed away in a flood of the Pecos River in 1889 and again in 1904.  The grave remained unmarked until 1932 when a cemetery tour guide raised funds for a permanent marker.  This stone bears the names of William H. Bonney, Tom O’Folliard and Charles Bowdre. It has never been stolen. 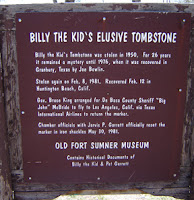 In 1940 a footstone was added.  This has become the more famous marker for Billy the Kid’s grave, the one that has disappeared at least two times.  It was first stolen in August 1950, and was missing for over 25 years before being discovered on a ranch in Granbury Texas.  It was stolen again in February 1981, but recovered days later in Huntington Beach, California.  The local town residents then placed a large steel cage over all three gravesites to protect the headstone.  The footstone was also shackled to prevent vandalism and theft. 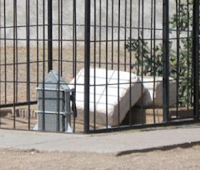 But Billy’s gravestone is once again in the news.  Last month, on June 16th it was vandalized.  The two thousand pound marker was tipped over and damaged along with other graves damaged at the Old Fort Sumner Cemetery. Police are following several leads and a $1,000 reward has been offered for information leading to the arrest of those responsible.

Although Bill the Kid has been dead for 131 years, it appears he can still create a stir.  Maybe “Rest in Peace” needs to be added to his stone.