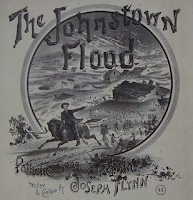 It was 124 years ago today that a rare storm, sweeping across the U.S., coupled with a neglected dam in a Pennsylvania valley town, led to tragedy and thousands of deaths in the city of Johnstown.

Floods were nothing new to Johnstown, Pennsylvania. Built into a river valley along the Appalachian Plateau, which was located at the confluence of two rivers, and a man-made lake 14 miles down the mountains; the local residents had dealt with many high water occasions. At least once a year, the two local rivers would overflow their banks due to melting snows from the mountains above, or intense rains that got trapped in the valley below, and unleash torrential amounts of water.

Heavy rains had pummeled the area for days.  The Conemaugh Lake was overflowing, rain ran down into the valley from the mountains above, and residents, living on a flood plain, thought they knew what to expect. 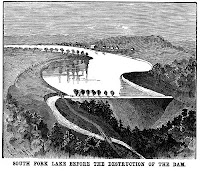 But no one had paid much attention to the redesign of the dam at the South Fork Fishing and Hunting Club, located high above the city.

The Club, a wealthy man’s retreat that included Andrew Carnegie and Henry Clay Frick among the members, had re-engineered the old dam to create the three-mile lake and private mountain retreat for the rich steel and coal barons of Pittsburgh. No one had seriously considered what would happen if the dam, ignored by the club and now in desperate need of repairs, began to fail.

Residents had been given warning of a flood and had taken precautions by carrying their belongings up to the second floors of their homes and businesses – standard procedure for an expected flood.  But this time would be different. 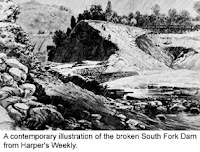 It was just after 3 p.m. on that dismal Friday afternoon of May 31, 1889 when the South Fork Dam washed away, and over 20-million tons of water rushed down the hill and toward the city of Johnstown.

The tumbling torrent carried with it trees, rocks, animals, people, houses, barns, miles of barbed wire from a destroyed wire factory upriver, even train cars torn from the railroad bridges in the tiny towns and communities hit farther upstream.

The wall of water was over 30 feet high and almost a half-mile wide, traveling at almost 40 miles per hour when it slammed into Johnstown just after 4 P.M.  The northern half of Johnstown was swept away, over 1,500 buildings and thousands of people – gone.

In the ten minutes it took for the flood to sweep through the city, over 2,200 people were drowned or swept away.  Some of the debris became stuck near the old Stone Bridge. Carried with it were several flood survivors, clinging to makeshift rafts, hoping to hold on until help could arrive at daylight. 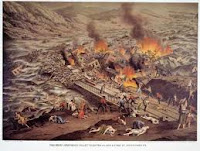 As the waters receded, debris continued to get stuck and piled up to a height of 40 feet.  Hot coals and gas began to ignite in the rubble; 80 people died in the flames. 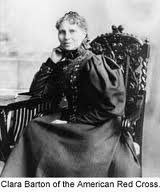 Clara Barton and The Red Cross arrived soon after, tending the injured, and helping residents put their lives and their town back together. This was the first major peacetime disaster that Barton’s newly formed American Red Cross had responded to. 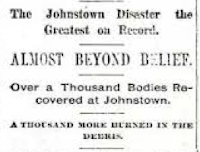 In all, 2,209 died at Johnstown, in the worst flood in the Nation’s history, and the largest loss of civilian life ever experienced in the United States. 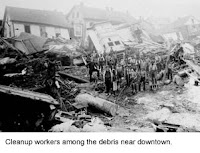 Hundreds of people were never found; over 750 bodies were never identified and their remains were buried in The Plot of the Unknown in Grandview Cemetery.  Remains were found for months, even years after the flood – The final remains were found in Cincinnati in 1911.  It took the City of Johnstown over five years to recover from the Flood of 1889. 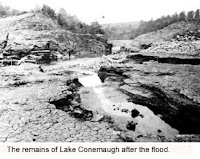 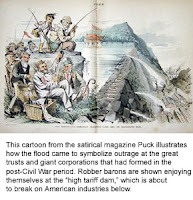 Although the collapse of the South Fork Dam was evident as a reason for the flood, neither the South Fork Fishing and Hunting Club, nor its rich owners, were ever found to be responsible for the flood or the damage.  However, many of the millionaire members did provide financial assistance for the rebuilding of the town. Damage was estimated to be $17-million – over $500-million in today’s economy.

Subsequent floods have continued to hit Johnstown hard.  In 1936, the St Patrick’s Day floods caused severe damage and left a path of debris all the way to Pittsburgh.


Again, in July 1977, torrential rains from passing storms flooded the rivers and the town was under 8 feet of water by dawn the next day. Eighty people died, forty in a dam failure. Over 50,000 were left homeless, and seven countries, declared as disaster areas, incurred over $200-million in property damage. The “100 Year Flood” was another one for the record books.

The Johnstown Flood National Memorial was authorized in 1964 and established in 1969 to commemorate the 2,209 people who died in the 1889 Flood. It contains portions of the Stone Bridge and remains of the South Fork dam.

Today, at Point Park, an eternal flame burns brightly in memory of the flood victims, and as a reminder of nature’s destructive power.

*Photos courtesy of the Johnstown Area Historical Association Archives, WWW.jaha.org and the National Park Service, www.nps.gov
Posted by Joy Neighbors at 5:00 AM