Desegregtion of the Military Ordered 65 Years Ago Today


Sixty-five years ago today, on July 26, 1948, President Harry Truman signed into law, Executive Order 9981, with the intent of ending racial segregation in the armed forces.

The order read, "It is hereby declared to be the policy of the President that there shall be equality of treatment and opportunity for all persons in the armed services without regard to race, color, religion, or national origin." 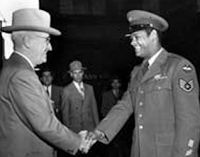 The President’s Committee on Equality of Treatment and Opportunity in the Armed Services obligated the government to begin integrating the military immediately. Finally, it was time.

Jim Crow laws were in effect throughout the military, and the country, from 1876 to 1965. During WW II over 2.5 million African American males registered for the draft, over 75% were placed in the Army, and 125,000 served overseas.

Black soldiers knew when they enlisted during WWII, they would be serving in segregated units, most working non-combat jobs driving trucks, working in mess halls, or working as dock laborers. Only the Army Air Corp and the Marines accepted African Americans for combat roles as fighter pilots.

But despite segregation, many African American units stood out for their spirit and courage. The Red Ball Express, operated mainly by black soldiers, was a convoy of about 6,000 trucks that delivered over 12,000 tons of supplies, each day, to the European Allied forces. The Red Ball Express ran from August to November 1944 and gave the Allies the traction needed on the ground to defeat the Germans.

The 761st Tank Battalion of the US Army was known as the Black Panthers. They served under General George Patton’s US Third Army, at his request, seeing action throughout central Europe, the Battle of the Bulge, and ending the war fighting on German soil.

The Tuskegee Airmen were the first U.S. African American military pilots. Known as the Red-Tailed Angels, they flew P-40’s Warhawks and P-51 Mustangs, escorting the heavy bombers lumbering to and from Germany, Poland, Austria, Hungary and Czechoslovakia with their bomb loads.


At the war’s end, the world was stunned by the atrocities committed against the Jews, by Nazi Germany. It was a revelation that made many Americans take a deeper look at racism in this country. “With liberty and justice for all” now had a new meaning to many, including our European Allies who could not understand why the U.S. was still segregated.

African American veterans came back home after the war determined to stand up against the racial injustices occurring against them in the country they had fought for. Now they were fighting a war for equal treatment and opportunity.

In 1946, President Truman appointed a Committee on Civil Rights to document racial violence and civil rights violations throughout the country for one year.

In 1947, the committee released its report “To Secure These Rights” reporting that the “disease of racism” was still thriving in the U.S. and especially in the nation’s military. The report recommended legislation be enacted "to end immediately all discrimination and segregation based on race, color, creed or national origin in...all branches of the Armed Services."

In February 1948, President Truman called for Congress to enact the recommendations issued by the committee. When southern members threatened a filibuster to stop the bill, Truman overrode them by using his executive powers and making Executive Order 9981 the law.


Arlington Cemetery, along with all other national cemeteries, adopted the President's policy and stopped all segregated burial practices that year. By 1954, the Army announced its last black unit had been desegregated. By the end of the Korean Conflict, most of the military was integrated. 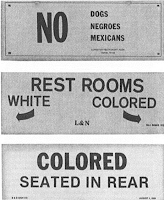 Although racism continued in the military and throughout the country for years after Executive Order 9981 was signed into law, it was the first major blow struck against segregation. That ruling gave African Americans hope to believe that in time, justice would be served and liberty and justice would, indeed, be for all.