The Stone Markers of the Cemetery

Stonecutting, or stonemasonry, has existed for thousands of years. From cathedrals and cities to monuments and gravestones, carvers have worked to shape something of beauty from the stone around them.

Some of the most famous stonemasonry includes the Egyptian Pyramids, the Taj Mahal, the Easter Island statues, and Stonehenge.

In the US, Vermont is known for its granite quarries and the work of its carvers can be seen in cemeteries throughout the state.

Such examples exist in Barre, Vermont, known as the “Granite Capital of the World,” and home to Rock of Ages Quarry, the largest deep hole granite quarry in the world.

Hope Cemetery in Barre is filled with over 10,000 tombstones and memorials, most carved from local Barre Grey granite.

By the close of the 19th Century, skilled sculptures from around the world were coming to the US to become a part of the growing stonemasonry industry. 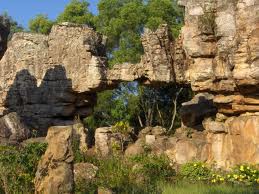 Although gravestones can be crafted from just about any material, there are three types of natural rock that can be carved and used for markers - igneous rock, metamorphic rock, and sedimentary rock.

Granite is an igneous intrusive rock consisting of mica, quartz and feldspar, usually ranging from pink to grey in color. It is a hard stone and one of the most difficult to carve requiring skill to sculpt by hand.

Alexander MacDonald of Aberdeen, Scotland carved the first polished granite tombstone using his invention of steam-powered cutting and dressing tools.  The stone was erected at Kensal Green Cemetery near London, England in 1833.

During the next 50 years, MacDonald perfected his carving techniques on granite. The most prestigious granite monument was the Royal Mausoleum in England, located on the grounds of Frogmore, where Queen Victoria and Prince Albert are buried. MacDonald’s techniques were later discarded when better machinery became available in the 1880s.


Metamorphic rocks make up a large part of the earth’s surface and include marble, slate and quartzite. Gravestones are usually fashioned from marble and slate.


Marble is a recrystallized form of limestone and
is easy to carve. Marble can range in color from blue/black to white depending on what part of the world it comes from. Italy is known for its Carrera marble- a white or bluish gray color. Sweden produces a green marble, while Tuscan marble can range from red to yellow with violet in it. Pure white marble can be found in Greece and near Marble, Colorado in the US.

Marble monuments and gravestones became popular during the early part of the 19th Century. Unfortunately, acid rain can cause damage to the stones over time, making the inscriptions difficult to read.

Slate is the finest grained metamorphic rock. Although very strong, it has a tendency to split. Slate is usually gray in color, but can also be purple, green or a combination of the two.

Slate was commonly used for monuments and gravestones, and when carved carefully a slate marker can have very sharp details.

Slate quarries could be found in the US in Pennsylvania, Virginia, Vermont and New York, sometimes referred to as Slate Valley.

Sedimentary stone can be limestone or sandstone. Most of the world’s most famous buildings have been built with these rocks including St Peter’s Cathedral, and the Roman Arena in Italy, the cliff dwellings in Colorado, and practically the entire town of Hot Springs, South Dakota.

Limestone comes from all over the world, but Lawrence County Indiana is known as having the highest quality quarried limestone in the US.

During the 19th and 20th centuries, limestone monuments, mausoleums and gravestones were very popular, but after the discovery of the effect of acid rain on the stone, limestone is not used nearly as much.

For some excellent examples of limestone grave markers a visit to Green Hill Cemetery in Bedford Indiana is in order. Hundreds of carvings, statues, sculptures and engravings exist in minute detail, thanks to limestone’s ability to weather well

Sandstone can also be found worldwide, usually around bodies of water or desert areas with sand. Composed of sand-sized minerals and rock grains, it has been used to build palaces and buildings; Ohio sandstone was used in the construction of the Federal Reserve Bank of New York.

Sandstone is resistive to the elements but easy to carve making it a favorite of carvers for gravestones during the 17th to 19th Centuries.

Fieldstone is just that, stone found in a nearby field or woods that is used to mark a grave. These were some of our earliest grave markers. In later times, those who could not afford to purchase a gravestone used fieldstone. Many times the deceased’s name and date of death was carved into the rock, but due to the elements and time, most inscriptions are difficult to red, if they remain at all. 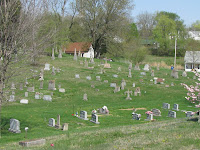 Stone markers are just another reason wandering through a cemetery can be such an adventure, and a delight. Especially when you hope to "leave no stone unturned."