Valentino and His Ladies in Black

He was one of the first Hollywood stars and he set the stage for the silent film star look. Rudolph Valentino was known as the Latin Lover and with his suave good looks he quickly became a 1920s sex symbol.

He was born in Castellaneta, Italy on May 6, 1895 and named  Rodolfo Alfonso Raffaello Pierre Filibert Guglielmi di Valentina d’Antonguolia. Rodolfo did poorly in school and was unable to find a job when he graduated. At the age of 18, he left Italy for the United States and better opportunities.

Once here, Valentino worked in restaurants and as a gardener before becoming a taxi dancer – a dance partner who is paid by the dance – at Maxim in New York. These paid dance partners were sometimes referred to as “a ticket a dance” or “a dime a dance” partner.

Valentino was able to support himself like this until he became involved in a prominent love triangle. After the wife murdered her husband, Valentino realized that it was best if he just left town quietly, so he joined a traveling musical troupe and headed out West.


By 1917, Valentino was performing in small musical productions in California. But he discovered that the money was better as a taxi dancer at the Alexander Hotel in Los Angles where several older women supported him.


In his free time, Rudolph was soon auditioning for parts in the silent films, but because of his dark looks he was always cast as the gangster or thug. His luck changed when he signed with the Famous Players and was cast in The Four Horsemen of the Apocalypse. The movie, released in 1921, became the first million-dollar box office success.


Valentino soon starred in several other films, but it was The Sheik in 1921 that solidified his reputation as the “Latin Lover.” With his now sought after dark, smoldering looks he had women swooning across America.


Valentino married Natacha Rambova (Winifred Shaughnessy) in 1922 but the marriage had to be annulled after a bigamy trial. They married again, this time legally in 1923. Valentino and his wife worked on several films together but by 1925 the marriage was in trouble and they separated.

It was the summer of 1926, Valentino was promoting his latest film, The Son of the Sheik when he became ill and collapsed at the Hotel Ambassador in New York City. He was taken to Stuyvesant Polyclinic Hospital in New York where he was diagnosed with appendicitis. Emergency surgery was performed but peritonitis set in and he developed sever pleuritis in his left lung.


Rudolph Valentino died on August 23, 1926 in New York City at the age of 31. It was reported that mass hysteria broke out across the country when his fans heard the news, some committing suicide. Thousands lined the train route as his body traveled from New York to California. He was laid to rest in the Cathedral Mausoleum at Hollywood Memorial Park, now Hollywood Forever Cemetery. 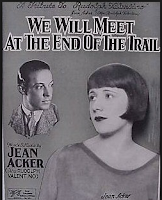 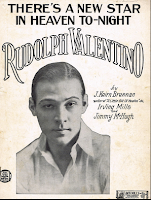 Several songs were written about his death including “There’s a New Star in Heaven Tonight” and “We Will Meet at the End of the Trail.”

To listen to "There's a New Star in Heaven Tonight" click here:
http://youtu.be/YYTAwdQgePk


In 1927, the first anniversary of his death, a woman dressed in black wearing a long black veil appeared at Valentino’s crypt, carrying a long stemmed red rose. At first, it was thought to be a publicity stunt, but each year the woman returned to pay her respects.


Rumors abounded as to who she could have been. Many claimed at the time that they were the Lady in Black but in 1947 Ditra Flame stepped forward and told her story. 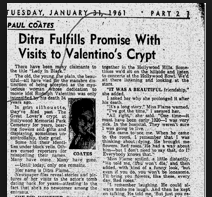 As a young girl Valentino had visited Ditra when she was sick in the hospital and afraid she would die there.  Flame said that Valentino assured her that she would outlive him by many years and that when he died, he’d like her to come and talk with him at his grave, to keep him company, so he wouldn’t be lonely. 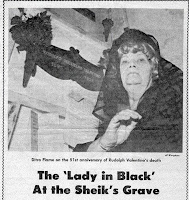 Flame continued to visit his grave each year until 1954 when there had become a parade of Ladies in Black. In fact, it was said that there were so many Ladies in Black visiting Valentino's crypt that day, it looked like a sale at Woolsworth. Eventually the crowd thinned out and Flame began her annual visits again in 1977, this time without the black mourning clothes and veil. She continued to visit Valentino’s crypt until her death in 1984.

But another Lady in Black began visiting Valentino in the early 1970s. Spanish actress Estrellita del Regil paid her respects as a tribute to her late mother whom she believed to be Valentino’s unrequited love. She visited the grave on August 23rd for almost 20 years until illness stopped her visits in 1993.

Soon after a third Lady in Black took up the mantel and began annual visits. Vicki Callahan said that she was a fan of Valentino’s and simply wanted to pay her respects on the anniversary of his death. Dressed in black she was captured by a TV crew as she placed roses at his crypt and another tradition began.

Valentino would probably be pleased with all of the visits (and publicity), for he has never been forgotten. And to this day,there are various adoring females to keep him company…