By Joy Neighbors
Ferdinand Cross was born in Flemingville, New York to John and Sophronia Cross, a stone-carver and his wife, in December 1838.  Cross followed in his father’s footsteps and became a stone carver. Ferdinand spent several years in New York State before moving to Chicago. He moved to Bedford, Indiana “Limestone Capital of the World” in the 1880s where he started his own monument business.


Ferdinand took John A. Rowe on as his business partner and the two established Cross & Rowe Monumental Works. The men specialized in carving gravestones from Bedford stone. The stone was pliable and easy to work with when first quarried. Once the shape was carved, the stone was placed outside to harden in the air. Today many of these monuments can still be found in the cemeteries located throughout Lawrence and Orange counties in Indiana.

In 1886, Ferdinand traveled to Orange County in search of a place to build his home and studio. He came upon a natural ravine enclosed on three sides with rock formations and a small cave completed the space. Ferdinand was delighted and set about building a home near what he now referred to as Cross’s Cave. 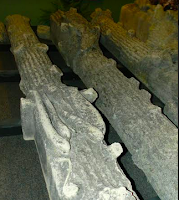 After relocating, Ferdinand tackled the challenge of carving people and animals in situ in the surrounding limestone cliffs. Visitors and locals alike were delighted to come across a carving of owls, eagles, monkeys, snakes and lizards nestled among the rock formations. One of his most remembered carving was a life-sized herd of cattle standing by an old well.

Ferdinand and his wife Everilla welcomed guests from the French Lick Springs Hotel with what became their famous fried chicken dinners. For the price of a meal, guests could meet the artist, visit his studio and explore the cave.
Ferdinand died in May 1912. As a tribute, fellow stone carvers crafted his ornate tree stone monument complete with chisels and mallet – the tools of this trade – cast aside at the bottom of the stone. Ferdinand was buried in the Sulphur Creek Cemetery.