Cabarets of Death and Beyond 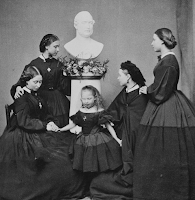 Let’s be honest, the Victorians were always fascinated with death. They came up with the “Silent Language of the Stones,” proper etiquette for mourning and funerals, superstitions about death, and what mementos a family should keep after a member had departed. (Hair wreath anyone?) But by the turn of the century, Victorian nightclubs were serving up a taste of death and Hell with a final respite.
The Cabaret of Hell 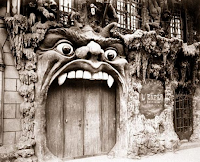 The Cabaret de l’Enfer (The Cabaret of Hell) opened in 1892 in the Montmartre neighborhood of Paris. Patrons of this hellish nightclub walked through a giant hellmouth to enter. Visitors were then greeted at the door by a devil with a rousing  “Enter and be damned, the Evil One awaits you.” 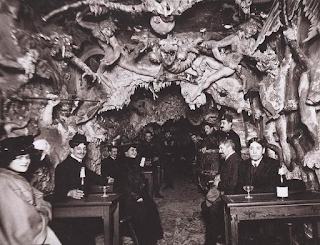 Red imps served up the drinks while musicians played suspended in a caldron over a fire. The Devil took every opportunity to heckle guests while plaster demons and the damned hung suspended from the walls and ceilings. For added realistic affect, smoke billowed out of the walls, thunder echoed through the rooms, and an odor of sulfur permeated the place. This entertaining inferno-themed cabaret was demolished in 1950 to make way or a supermarket.

The Cabaret of Nothingness 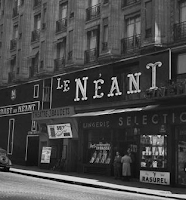 Originally stated in Brussels, the Cabaret de la Mort" (The Cabaret of Death) opened in 1892 in the same Paris neighborhood. This macabre nightclub specialized in death and the illusions of what happened beyond the grave. But this was still the nineteenth century and the public was leery of a place that flaunted death, so it was renamed The Cabaret du Néant" (The Cabaret of Nothingness.) 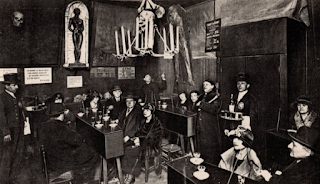 Here, guests were seated at coffins and caskets that rested on biers in the Salon of Intoxication. Monks and pallbearers served patrons drinks named after diseases... cholera; cancer and consumption were just a few. Human skulls were suspended from the walls, skeletons were posed in unholy positions, and guillotines were featured as decorations. 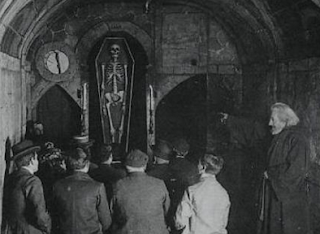 Of the three cabarets, this was always the one most feared by the public due to its death-themed decor and the mysterious illusions of decomposing bodies, and the walking dead. The Cabaret of Nothingness died in the 1950s.

The Cabaret of Heaven

But for all of the fiendishness at these nightclubs, there was respite close at hand. The Cabaret du Ciel ("The Cabaret of Heaven") offered celestial décor complete with candles and golden statues. A group of angels in white robes with wings and halos took heavenly drink orders amidst harp music. 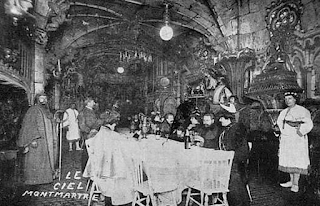 Father Time and Dante visited with patrons while St Peter sprinkled holy water upon those on hand for the evening's reckoning. This cabaret closed its pearly gates during the mid-twentieth century.
Would such themed cabarets or cafes be popular today? I definitely think so. Let’s hope someone decides to succumb to the idea and open one.
~  Joy
Posted by Joy Neighbors at 5:30 AM