On a chilly Friday afternoon, just days after a train derailment in Waverly, Tennessee, a tanker car loaded with an unstable gas exploded during cleanup attempts. Sixteen people died in the February 24, 1978 blast. 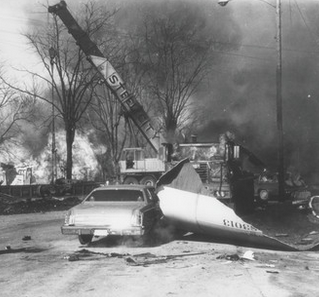 The derailment of 24 cars from a Louisville and Northern Railroad freight train occurred Wednesday night, February 22, in downtown Waverly. Officials made the mistake of classifying one of the tankers as double walled when it was actually single walled. Local police and fire departments were on the scene for two days, spraying the cars with water in an attempt to keep them cool. The weather was assisting with temperatures in the 20s and a light snow on the ground. When HAZMAT teams arrived Friday morning, the weather had changed; the sun was shinning and temperatures had climbed into the mid-50s – heating up a single walled train car containing 2,000 gallons of liquefied petroleum gas. Officials tested the area for leaks and found none. At around 3pm, as crews were setting up HAZMAT equipment, an explosion rocked the region, igniting the car into a fireball, throwing train cars for hundreds of feet, and triggering flash fires in and around the downtown area. Residents were evacuated within one mile of the blast zone for fear of more gas leaks. 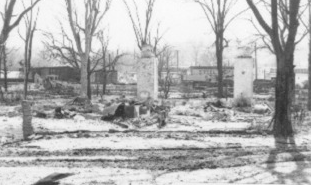 Records indicate that six people were killed instantly in the blast. Ten died as a result of injuries sustained from the explosion. Among them was Waverly’s fire chief Wilbur York, 65, city police chief Guy Barnett, 46, Tennessee Office of Civil Defense state investigator 24 year old Mark Belyew, five L&N cleanup crew members, two fire fighters, and six local residents. Forty-three people were burned and injured. For the next several hours assistance came from as far as Memphis and Nashville with firefighting air assistance and air ambulances traveling from Fort Campbell, Kentucky. Burn victims were sent to Cincinnati Ohio, Louisville Kentucky, and Birmingham Alabama. A total of 16 buildings were destroyed in the downtown area. 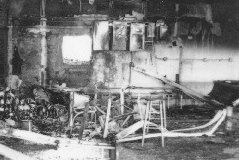 Reports later indicated that the blast was caused when the single walled train car began leaking gas out through a crack that was caused by the derailment. Although the local emergency crews were prepared to handle train derailments, they were not trained in handling hazardous materials. In 1980, new training standards were put in place in Tennessee. To date, there have been no emergency responders killed at HAZMAT sites in the state. 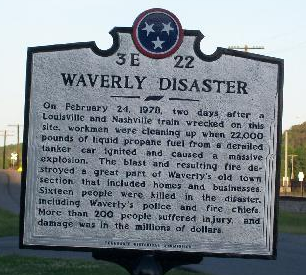 Today the town remembers the horrific incident with a museum and memorial. The Waverly Train Explosion Memorial Museum is located by the railroad tracks where the blast occurred. A fitting tribute to those who died.
~ Joy
Posted by Joy Neighbors at 5:00 AM