The Year Without a Summer

Tomorrow, Saturday June 20th is the first day of summer – the Summer Solstice. And with summer comes thoughts of vacations, festivals, reunions and generally all-around good times. But this is the summer of Covid 19, of social distancing, of wearing masks and being responsible for ourselves, and each other. This may be a year many consider as not having a summer. And while that might be true figuratively, it won’t be what many suffered through in 1816, a time that went down in history as “The Year Without a Summer.”

People talked about the spring of 1816 as being noticeable “odd.” What began as a normal spring changed abruptly as temperatures plunged into the low 30s and incessant rain made planting difficult for farmers. A dry “fog” had settled on the ground and remained there for most of the season into the summer and fall. People described it as walking through a gauzy veil. The fog helped keep temperatures cool and newly planted crops did not take root and grow.
The year of 1816 was an agricultural disaster. In the Upper Eastern part of the country down into Virginia, temperatures stayed in the 30s for the month of May. In New York, snow fell on June 6. Frost killed off crops in New Jersey during the latter part of June. And in Massachusetts, frost occurred all summer right into September. Rivers and creeks throughout the Eastern US were filled with floating ice during this strange summer.

The spring plantings of corn, oats, wheat and barley were killed by the unprecedented frost and snow. Tree leaves took on a singed appearance from sudden freezing temperatures. Grain prices soared, and farmers suffered a year of intense hardship. Across the US, Canada and Europe food prices skyrocketed, and famine was reported. Outbreaks of a new strain of cholera and typhus plagued citizens in Europe, China and the United States taking millions of lives.
The dismal cold, wet dreary weather led author Mary Shelley in Europe to pen her famous horror story, “Frankenstein.”

Many blamed divine retribution for the bizarre weather conditions but 20th century scientists who have studied the event say the eruption of the Mount Tambora volcano in Indonesia is probably to blame. Erupting in April 1815, the violent blast sent sulfur dioxide into the stratosphere creating a volcanic winter across the world. Ash clouds filled the skies. It was the largest volcanic eruption in the past 2,000 years, and the most intense of the 19th century. Tens of thousands of people died but few people outside of the area knew much about it due to limited methods of communication. Mount Tambora had rose up 12,000 feet before 1815. After the explosion, one third of the top had been blown away. The magnitude of the explosion is difficult to ascertain. It took a year for the ash clouds to reach North America creating a devastating effect. 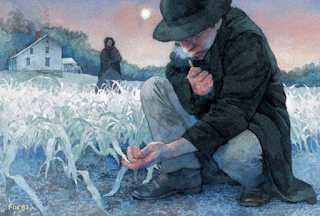 Tomorrow as you prepare to enjoy a summer that will be different from those you recall, remember those residents of 1816 who muddled through that Year Without a Summer. We are a hardy lot, and we will persevere. Have a happy summer!
~ Joy
Posted by Joy Neighbors at 6:30 AM No comments: