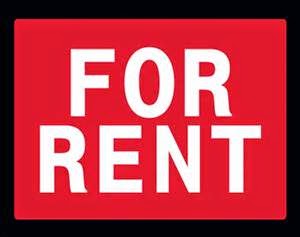 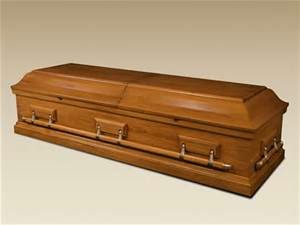 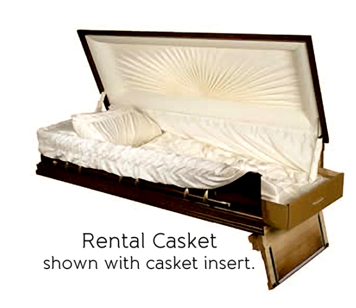 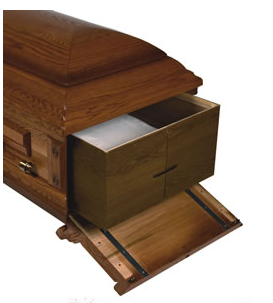 The word coffin comes from the Old French cofin and from the Latin cophinus, which translates into basket. The word was first used in the English language in 1380.  A coffin is defined as a box or chest for the display/burying of a corpse. When used to transport the deceased, a coffin may also be referred to as a pall.


Coffins have been used since ancient Egypt when a body was mummified and placed in a sarcophagus before being buried in pyramids.  In Europe, around 700, the Celts began fashioning burial boxes with flat stones.  But the majority of people throughout time have been buried wrapped in a shroud, or in a wooden box.

As Nathaniel Hawthorne put it in 1863, “Caskets! A vile modern phrase, which compels a person ... to shrink ... from the idea of being buried at all.”

During the Civil War, so many coffins were needed to transport the dead that the mass production of coffins began and the casket industry developed by the late 19th century.

Coffins/caskets have been made from wood, cast iron, steel, fiberglass, glass, bamboo, wicker, wool, even gold. Ornamental trim could be carved from whalebone, elephant ivory or precious metals.

In 1784, Holy Roman Emperor Joseph II declared that reusable coffins were to be used in order to save wood.  The coffins were equipped with a trap door on the bottom that would drop the body into the hole and allow the coffin to be pulled back up and used for another funeral.  Due to public outcry, the law was cancelled within the first six months.

Cast-iron coffins were made from the 1850’s through the 1870’s.  Almond Fisk patented the first cast-iron casket in 1848.  It was shaped like a sarcophagus, weighed over 300 pounds, and cost up to $100. Wooden coffins sold for $1 to $3.00, (around $40 to $60 today.) Unfortunately, Fisk’s manufacturing building burned to the ground in 1849.  Fisk died in 1850, penniless, having mortgaged his patented rights to John G. Forbes in order to get loans to continue building his metallic burial boxes. Forbes and his family restructured the company, changed the name, and continued making the metallic burial cases until 1888 when the company folded.

But metal coffins had caught on with wealthy families.  The affluent purchased them to deter grave robbers. In 1885 General Ulysses S. Grant was buried in an iron casket that was created in New York.


The fear of being buried alive was rampant in the late 1700 and 1800’s.  This was due in part to the cholera epidemic and rumors of live burials that had occurred.  Edgar Allen Poe’s story “The Premature Burial” didn’t help matters.  In response to these fears a safety coffin was developed.  The coffin would include a mechanism that allowed the occupant to signal that s/he had been buried alive.  Usually it was a cord attached to a bell.


At the turn of the 20th Century, wooden caskets were still the most popular.  But by the 1960’s, steel casket production had grown to 50% of the market.  By the 1970’s, nearly two-thirds of all caskets were metal.  Today, it is mainly stainless steel caskets that are used. Caskets are available in 16 – 18 – 19 (a combination of 18 & 20 gauge) – 20 and 22-gauge steel.  Metal coffins can also be made in bronze and copper.  The less expensive metal caskets are made of the higher gauge of stainless steel.

Cloth covered caskets are made from pressed wood, softwoods or corrugated fiberboard.  Caskets that are cloth covered and less expensive than hardwood or steel caskets.

With the interest in cremation growing, and the beliefs of many religious groups, wooden coffins continue to have a place in our burial traditions.  Hardwood caskets are made of solid wood.  Selected woods include mahogany, walnut, cherry, maple, birch, oak, pine, poplar and willow.  Other wood can also be used such as ash, elm, cedar, and redwood.  A veneer-finished casket is less expensive than one of solid wood.

But remember that regardless of any claim, even if the casket has a gasket that seals, it will not protect the body from decay, or protect the public from disease.  In fact, an airtight coffin can cause the body to liquefy.  A coffin that permits air to pass through, such as a wooden box, allows for skeletal remains.

Coffins/caskets can now be found in a variety of shapes, including musical instruments, cars, and wine corks. (http://crazycoffins.co.uk)

Some are designed to look like a box of chocolates, flowers, even a bottle of cognac. (http://www.creativecoffins.com/)

Regardless of the type of coffin/casket or lack of burial container, a burial, cremation or committal ceremony is a way for the living to honor the deceased.  It is a chance to say a final goodbye and pay tribute to a life well lived.  And that is what truly matters.