Tomorrow marks the 125th anniversary of the first canonical victim of “Jack the Ripper,” the name given to an unidentified serial killer during the savage murders that took place during the autumn of 1888.

Jack the Ripper is Britain’s most notorious serial killer. Although many suspects have been identified, no one has ever been undeniably determined to be "The Ripper." But that has never stopped “Ripperologists” from attempting to solve this very ‘cold case.’

It was around 3 a.m. on August 31st, 1888 when Mary Ann (Polly) Nichols, a local drunk and prostitute, was searching for one more trick to turn so she could pay for her lodging that night. Polly was a good-looking woman and she didn’t have long to wait – but she got more than she ever bargained for.

At 3:40 a.m. Charles Cross, a cart driver on his way to work, noticed a bundle of rags lying across the street. When he walked over to them he discovered that the pile of rags was a woman, who appeared to be dead. Cross stopped another man, Robert Paul, who was passing by on his way to work.

When both men knelt by the body, Paul thought he could still feel a faint pulse. They went in search of a constable for assistance and after finding one both proceeded on to work.

Just moments after Cross and Paul had left, Constable John Neil discovered the body and sounded the alarm. It was only after shining his lantern on the woman did he discover she was dead. The victim’s throat had been cut so deeply that the head was almost severed from the body. 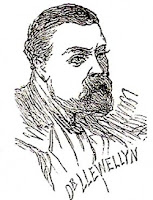 The woman’s skirt had been raised almost to her stomach, her abdomen had been ripped open and she had been disemboweled. According to surgeon Dr. Henry Llewellyn, who was called to the scene, the woman was killed by a swift slash to the throat. The body was later identified as 43-year-old Mary Ann (Polly) Nichols of Spitalfields.

Polly had been born to London locksmith Edward Walker and his wife Caroline on August 26, 1845. Polly married William Nichols in 1864 and was the mother of five children. Around 1880, Polly and William separated. Police reports indicate that it had to do with her drinking.

After her final separation from William, Polly moved into a workhouse since she was unable to support herself. She lived in several workhouses during the next 8 years, most notable at Lambeth.

Conditions in the workhouse were hard although the food was considered to be adequate. The inmates were required to work for their food and lodging, doing such chores as chopping firewood, cleaning the wards, and caring for the sick.

In May of 1888, Polly left Lambeth to take a position as a domestic servant in Wandsworth, southwest of London. She was able to hold the position for two months before her drinking caused problems. Polly left her employment, taking with her clothing she had stolen worth just over 3 pounds. At the time of her death, she was living at a common lodging house at 18 Thrawl Street in Spitalfields, Whitechapel. 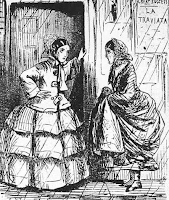 Polly Nichols was last seen alive on Friday, August 31st at about 2:30 in the morning at the corner of Whitechapel Road and Osborn Street by her friend, Ellen (Nelly) Holland. Polly had indicated to Holland that she was trying to earn enough money to buy a four pence bed for the night. Polly had told Nelly that she had already earned enough money to have purchased her bed three times over, but instead she kept spending it on drink.


It was around 3:40 a.m. when Polly’s body was discovered by the workers, lying in front of a stable gate on Buck’s Row in White Chapel, just 1/8th of a mile away from the Royal London Hospital. Polly’s body was later identified by her husband, William Nichols and her friend, Nelly Holland. No one in the vicinity of the murder had reported seeing or hearing anything unusual.

When Polly’s murder occurred, the Metropolitan Police were already dealing with two similar
murders that had taken place earlier in the year. The police had reason to believe John (Jack) Pizer, a Jewish boot maker who went by the nickname of ‘Leather Apron’’ was a good suspect. Pizer was known to have a vicious temper and enjoyed harassing prostitutes. He would be the first of many suspects the Metropolitan Police would investigate as the Whitechapel Murderer.

Mary Ann (Polly) Nichols was buried in a polished elm coffin on Thursday, September 6, 1888 at the City of London Cemetery. Her husband, son, and father were in attendance. In 1996, cemetery officials marked Polly’s grave with a plaque. 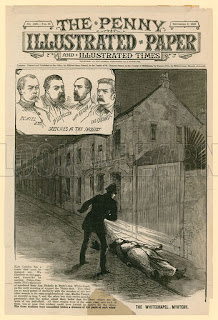 On Saturday, September 1st an inquest into the murder of Polly Nichols was held at the Working Lad’s Institute in Whitechapel.  According to the inquest testimony of Dr. Llewellyn, the neck “incision completely severed all the tissues down to the vertebrae. The large vessels of the neck on both sides were severed. The incision was about 8in. in length. The cuts must have been caused by a long-bladed knife, moderately sharp, and used with great violence… There were several incisions running across the abdomen. There were three or four similar cuts running downwards, on the right side, all of which had been caused by a knife, which had been used violently and downwards. The injuries were from left to right and might have been done by a left-handed person. All the injuries had been caused by the same instrument.”

The inquest lasted for four Saturdays before the jury heard all of the evidence. After a short consultation they returned the verdict of “willful murder by some person or persons unknown.”

So began the three month murderous reign of terror on Whitechapel’s prostitutes by a killer who would come to be known as Jack the Ripper.  No one suspected then that this would become one of the most perplexing cold cases of all times…