Just in time for Halloween, here are just a few ghostly tales to make your weekend "spirited." 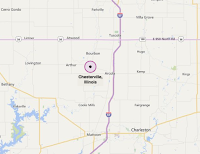 Chesterville, Illinois was a quiet Amish community once located near Rockome Gardens. Buried in the former town cemetery is a marker that bears no name. What’s left of an iron fence tries to enclose the block-type stone, which many say marks the grave of a woman who was killed for being a witch. 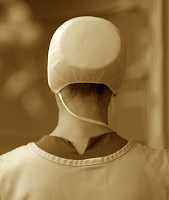 Back at the turn of the last century, it was rumored that the Amish woman challenged her church about their views being too conservative. She believed that women should have a more active role than simply serving men. The Amish elders did not take kindly to such heresy and accused her of working with the devil. A short time later, the woman simply disappeared. Her body was later found in a nearby field.

The woman was buried in the town cemetery where an oak tree was planted on top of her grave in order to trap her spirit. Legend has it that when the tree dies, she will be free to return and take revenge on the area. For now, her ghost can be seen at times, standing near her grave. 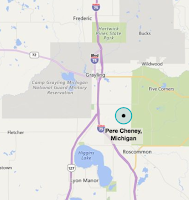 What was once a thriving lumber town known as Pere Cheney in Michigan is now a ghost town – literally. Pere Cheney was established in 1874 after the railway placed a stop there. George Cheney built a sawmill, and lumberjacks and their families began to arrive. Three years later, the village was large enough to support two sawmills, a general store and a doctor. Pere Cheney was booming, but that was before the “bad luck” began. 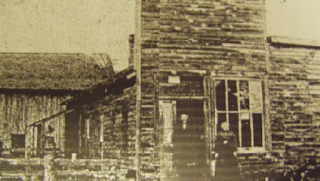 In 1893, residents were hit with outbreaks of diphtheria, scarlet fever, and small pox. Next, several fires raged through the town, probably due to sparks from the mills. Others said it was the work of the witch. In 1897, another outbreak of diphtheria took a toll on the town. By 1901, the population was down to about two-dozen people. By 1917, the village land was sold at a public auction, and the last 18 residents moved away. Pere Cheney was a ghost town. 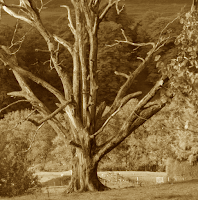 But some believed the town was cursed from the start because it was built on Native American land. Others said a local witch had placed a curse on Pere Cheney after she was banished for practicing witchcraft. Legend has it that she was hunted down in the woods, taken to the cemetery and hanged from a tree that she was then buried under. Visitors to the cemetery report they have seen her ghost standing under a tree ... 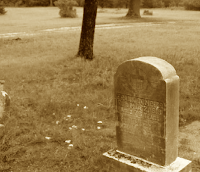 While there’s nothing to support the witch legend, no one denies that strange happenings do occur in the cemetery, where out of 90 burials only a few gravestones remain. Handprints have been discovered on vehicles after leaving the graveyard. Others have heard the sounds of children laughing and playing in the vacant cemetery. And ghostly figures, voices and floating orbs have been reported there and in the nearby woods.

The remains of the town are located a couple of miles away – the ruins of what’s left of the hopes and dreams of the townsfolk of Pere Cheney. 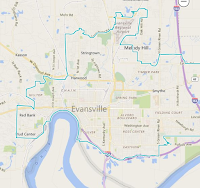 This is the most famous ghost story in the Hoosier State, thanks to several ghost-hunter television programs, the Willard Library “ghost-cams,” and the Willard Library Ghost Chatters, a dedicated group who keeps an eye out for this specter all year along. 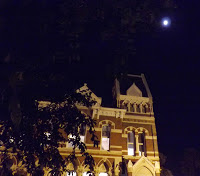 Willard Library was established in 1885 by Willard Carpenter, a well-to-do Evansville businessman. The three-story Victorian Gothic-style building is the oldest public library in Indiana.

The first report of the library being haunted occurred in the winter of 1937. As the janitor was stoking the basement furnace in the early morning hours, he came face-to-face with a woman dressed in grey. When he asked what she wanted, she simply faded away. (The janitor quit the next morning.) 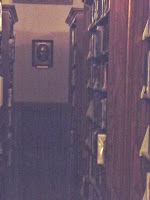 The Grey Lady is known to move furniture, push books off shelves, and occasionally touch patrons. Footsteps can be heard when no one is on the floor in question, and the scent of lilac or lavender perfume sometimes wafts through the air. She has been seen numerous times on the main staircase, and appears to enjoy working in the children’s section. 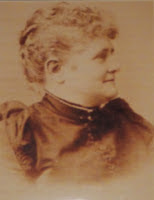 Who is the Grey Lady? Some claim it is Carpenter’s daughter, Louise who is unhappy that her father left his money (her inheritance) to the library. But the majority of ghost hunters claim that this is the spirit of one of the librarians who worked here years ago.

Mausoleums - Haunted "Homes" of the Dead 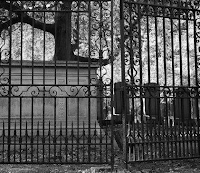 Haunted cemeteries are especially in vogue this time of year, but haunted mausoleums seem to be a major attraction any time. There’s something about this “house-type" structure that intrigues us, and then throw in a ghost or two, and we're hooked.

Here are four mausoleums that house more "spirit" than most. 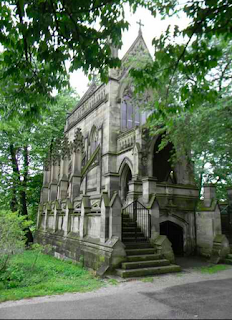 This mausoleum was built in 1869 for whiskey baron, Edmund Dexter, one of Cincinnati’s wealthiest residents in the mid-1800s. When Dexter died, he was laid to rest in this Gothic Revival mausoleum, which contains 12 marble crypts where four generations of the Dexter family are buried. Besides it’s claim of being haunted, it also boasts the only two flying buttresses in Cincinnati.

It has been rumored that two large white dogs protect the mausoleum, although it isn’t known if they were once pets of the Dexter’s. Legend has it that if you sit on the steps of the mausoleum, the dogs will appear. If they believe you to be good, they will run past. If they are not sure of your intentions, they will stop and watch you. If they sense you are up to no-good, they will growl and advance. (Best to be up to only good when you visit.) 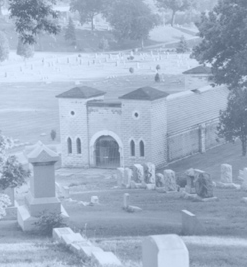 The Public Mausoleum was built in 1908 but soon ran into trouble when leaks developed due to shoddy construction. The cemetery association soon ran out of money and ghost stories began to circulate as the grounds fell into disrepair. By the 1950’s, what had once been a beautiful, rural garden-style cemetery became a magnet for negativity. People reported hearing disembodied voices, crying and screaming coming from the mausoleum. By 1957, the building was declared unsafe and was closed. Family members were notified to relocate their loved ones. One hundred bodies were never claimed – some were never identified. Eventually the cemetery association buried them in common graves across from where the mausoleum had been.

It was 1967 when the mausoleum was finally razed. Today that site is still vacant. No burials have ever been made here, and there are still reports of voices along with lights seen wandering near the common graves – perhaps a lost soul searching for their remains? 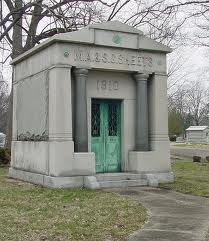 Martin Sheets was born in 1853 and lived into his early 70s. He saw many technological changes during that time, and one of the new-fangled inventions he found an odd use for was the telephone. Martin had one installed in the family mausoleum, just in case he was buried unconscious, but alive, and needed to summon help. It was stipulated in his will that a phone line be run from his crypt to the cemetery office. He then set up an account with Indiana Bell Telephone that kept the line paid for and active, just in case he ever needed it.

When Martin died, he was placed in the family mausoleum with his infant daughter. Several years later his wife Susan passed away. When family members found her, she was in the kitchen with the phone in her hand. They assumed she had been attempting to summon help.  But according to legend, when the mausoleum was unlocked to place Susan’s casket next to her husband, cemetery workers discovered the phone in the crypt was off the hook! Coincidence … or a call to "come home?"

And then there’s my favorite haunted mausoleum tale - that of Stiffy Green.

Terre Haute businessman John Heinl and his dog, Stiffy Green would stroll through town, visiting with the folks. Stiffy had received his name because of his stiff walking gait and green eyes, and everyone knew the pair. 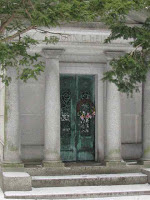 On December 31, 1920, John Heinl passed away. Stiffy was inconsolable. He sat be the coffin at the funeral and followed the family to the graveyard where he took up post at the mausoleum doors, and there he remained, guarding his master in death as he had guarded him in life. Family and friends made many trips to the cemetery that winter to retrieve Stiffy and take him home, only for him to return to his master’s crypt doors.

Stiffy slowly mourned himself to death. Heinl’s wife was so touched that she paid tribute to his unwavering love and devotion by having him stuffed in the sitting position he had assumed for so long on those cold mausoleum steps.  Stiffy was then placed inside the tomb, reunited at last with his master.

But it wasn’t long before cemetery workers noticed that Stiffy mysteriously moved from one side of the tomb to the other, and back. Sightseers began to visit after dark and vandals would not leave the site alone, damaging doors and windows. Then, in 1985, thugs shot out Stiffy’s right glass eye. The family decided it was time for Stiffy be moved and the Vigo County Historical Society Museum agreed to take him. There, the Terre Haute Lions Club built a replica of the Heinl mausoleum so that Stiffy could still be “on guard.” 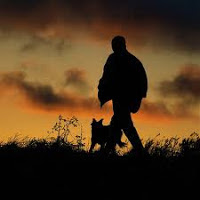 But rumors spread that just at twilight on autumn evenings, you can see an elderly man and his small dog walking near the Heinl crypt, the smell the rich pipe smoke wafts though the air, and a low voice can be heard talking to his devoted companion who answers him with a happy bark as they take another stroll together.