Happy Birthday, Walter Cronkite! Today would have been the 100th birthday of “The Most Trusted Man in America.”

Walter Leland Cronkite, Jr. was born November 4, 1916 in St Joseph, Missouri, the only child of Walter Leland Cronkite, Sr. and Helen Fritsche Cronkite.  Walter grew up in Kansas City, Missouri and Houston, Texas.  He attended the University of Texas but dropped out to take a news reporting position with the Houston Post.
Cronkite began his broadcasting career at a small radio station, WKY in Oklahoma City, Oklahoma.  He met his wife, Mary Elizabeth ‘Betsy’ Maxwell in 1936 while working for KCMO in Kansas City, Missouri.  From there he worked as a wire service reporter for the United Press (U.P.)


One of the most powerful early memories of television journalism is of Walter Cronkite, stunned and  holding back tears when the A.P. (Associated Press) newsflash of Kenney’s death was handed to him.  Fighting to maintain his professional composure, Cronkite began “From Dallas, Texas, the flash, apparently official: “President Kennedy died at 1 P.M. Central Standard Time – 2 o’clock Eastern Standard Time, some 38 minutes ago.”
Reading the announcement, Cronkite paused, put his glasses back on and swallowed hard in order to maintain his composure.
That moment sticks in the mind, just as Roosevelt’s announcement of the bombing of Pearl Harbor did for the generation before.


A 1972 poll announced that he was the ‘most trusted man in America,” besting the President, Vice President, members of Congress and all other journalists. 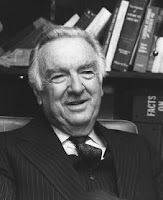 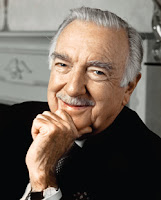 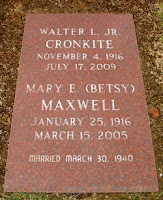 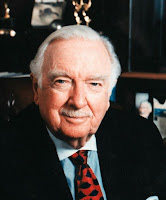 "Happy Birthday ‘Uncle’ Walter!"
And thank you for setting the standard for fair, impartial reporting, the likes of which may never be seen again.