The Mad Gasser of Mattoon

Small towns across the country have their share of odd stories and urban legends, and Mattoon Illinois is no exception.  Located in the central part of the Prairie State, Mattoon is bordered by a sea of corn on the north and timberlands to the south. But in the 1940s, it became known for its “Mad Gasser.”
It all began the night of Friday, September 1, 1944 when Aline Kearney and her three-year-old daughter Dorothy Ellen were awakened by a sickening sweet smell. When Mrs. Kearney tried to get out of bed to investigate, she discovered that her legs and lower body were paralyzed. When her husband returned home from work at midnight, he saw a man prowling around the house and gave chase. Mr. Kearney reported that the man was extremely thin and dressed all in black. The next day police said that apparently a burglar was attempting to anesthetize his intended victims before breaking into their homes. Two other homes had also reported similar incidents that night.
Another resident, Urban Raef reported the next day that he was awakened by an odd smell in his bedroom on the night of August 31. Raef woke his wife who thought that maybe the pilot light had malfunctioned on the gas stove. When she tried to get out of bed her legs would not move. Raef was unable to help her because he became physically sick. Both attributed their problems to the strong smell.
Each night more incidents occurred and the next morning the local paper carried more stories about the “Anesthetic Prowler,” later dubbed the “Mad Gasser of Mattoon.”

By September 5th, evidence was supposedly found. A Mattoon woman discovered a piece of white cloth on her porch that had an odd odor and caused her mouth and nose to burn when she inhaled it. That same night, another resident reported that gas was blown into an open bedroom window awakening them.
The symptoms of the attack were always the same: vomiting, a burning sensation in the mouth and nose, lightheadedness, problems breathing, and temporary paralysis of the legs.
The following Wednesday, September 6, seven more families had been gassed. By September 10, another half dozen residents had experienced the Mad Gasser’s attacks. Officials said that by the description of the smell, they thought that ether or chloroform was being used.

Reports were now coming into police headquarters at a fast pace and local police had no ideas what was happening or how to stop it. Their only clues included the white cloth, cut window screens and a woman’s footprints found outside some of the windows. Roadblocks were set up and armed patrols scoured the neighborhoods where the attacks occurred. Vigilante groups took to the streets in search of the culprit but no one was ever caught.
Police were baffled and claimed the incidents were the result of mass hysteria caused by the original news reports. The police chief suggested that any gaseous fumes could be coming from the Atlas Imperial Diesel Engine Plant in the city. (However no employees of the plant reported any of these symptoms during this time.) Police, tiring of the media frenzy, threatened that they would start arresting anyone who reported a gassing and then refused to submit to a medical exam. Only one more report was filed. 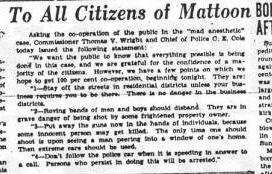 The final call came on Wednesday night, September 13 when a woman told police that she had seen a female dressed in men’s clothing skulking outside her house. However, there was no report of any odors.
In all more than two-dozen people reported being disabled by gaseous fumes sprayed into their homes within the two week period. 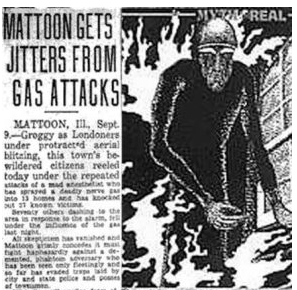 Was there really a “Mad Gasser” in Mattoon during the late summer of 1944? Or was the theory of mass hysteria correct? University of Illinois psychology student Donald M. Johnson published a paper in 1945 suggesting that since the incidents occurred during the war when the men were off fighting, it could have been caused by mass hysteria brought on by paranoia, fear and delusions.
Others pointed to local resident and university student Farley Lewellyn who was studying chemistry. Lwellyn had been shunned by the small community for the suspicion of being a homosexual. Many suggested that the attacks were based on his “mental instability and pent up anger.”
Another theory is that residents reading the war news from Europe may have thought that the Nazi’s were attempting a poisonous gas attack in the heart of the U.S. – an area that was supposedly safe from attack.
It is curious to note that similar events occurred in Botetourt County, Virginia from mid- December 1933 until February 3, 1934.  There too gas was used to immobilize residents and make them ill. Dubbed the “Anesthetic Prowler,” a man dressed in dark clothes was reported to have flooded several homes with an unknown gas that caused victims to choke, gag, experience weakness, headaches, dizziness and breathing problems. For unknown reasons, the gasser then moved to Roanoke County where the incidents continued from February 7 to February 12. Police received 19 calls within that six-day period, but again, no one was ever caught and the entire episode was listed as the result of mass hysteria. Was Mattoon's gasser a copycat? 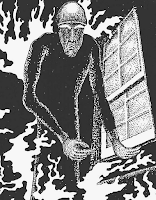 To this day, no one has ever arrested for being the Mad Gasser. Who and what caused the illness of more than two dozen residents of Mattoon during those two weeks in early September 1944 remains unsolved.
~  Joy