(Again, apologies for the delay in this post. I have been trying to get an audio interview on this blog for over 36 hours and I still cannot get Blogger to upload it.  This was a fun interview to do and I wish you could hear it.  I will post it when this situation is remedied.  Meanwhile, I have transcribed the interview below. If you have suggestions or ideas concerning Blogger and audio/video, please let me know!)


You’ve probably heard the terms cemetery sexton and sexton’s records.  But just what is a sexton?  And what kind of records would he or she keep?

A sexton is actually the caretaker of a cemetery. The person who is in charge of making sure that all of the upkeep and maintenance gets done on a regular basis, along with maintaining the safety, security, and appearance of the cemetery.  And that includes overseeing all of the work that goes into preparing a grave for a burial, maintaining equipment, and preserving headstones, memorials, and mausoleums. Quite a job!  And even more so, when it involves the upkeep of a large cemetery or a combination of several cemeteries.

Sexton’s records refer to the cemetery deeds and plat books that the sexton or caretaker maintains.  These books offer the genealogist information about who purchased the plot, who owned the deed, along with any sales, transfers or inheritances involving a plot.  The Sexton is also in charge of the burial register that contains general information about the deceased including age, address, date of death, date of burial, plot number and section.    The Sexton can answer the 5 W’s for you, just like a reporter.  Who is buried here, when were they buried, where is the grave located, why is it located where it is and what were the burial details?
But there is more to being a cemetery sexton than just recording names and date, or overseeing maintenance and upkeep.  There is an understanding and appreciation for the job and the realization of how it will affect people for generations to come.
I spoke with Dan Wilson, the superintendent, or Sexton, of the oldest public cemeteries in Indiana. Composed of Green Lawn Cemetery started in the 1780’s, Fairview Cemetery, which began in 1899 and Memorial Park Cemetery started in 1930 – all are a part of the Vincennes City Cemeteries located in Vincennes, Indiana.  Dan has been superintendent here for over ten years, but he’s been involved with cemeteries for almost 30 years.
While Dan can inform you about the general who-what-when-where and why of these cemeteries, he has taken his job one step further.  He makes it a point to know something about those interred here.  He loves the histories, the stories, not just of the cemeteries, but also of those under his care.
[ Transcript of Interview with Dan Wilson]

Dan Wilson:
I started collecting information about the families and the people who are buried there.  A lot about how they died and how they lived, so it’s kind of fascinating.  Not only do we have burial information on thousand of people, we have what they did for a living, their relatives, we have all kinds of information, cool stories. That’s the history part of the stuff I like. 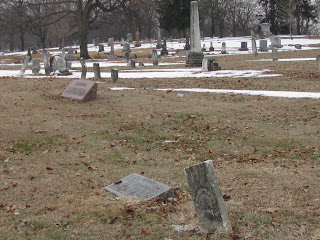 I love information and I hate to see information die with the people.  So when someone comes out here and visits a grave, I can say, you know, 50 years after someone’s passed away, it’s kind of cool to be able to tell them a story about the person, some little something they did not know.
The funeral home is real nice. They give me these books to go through all their records and I pull information out about the people who are buried here.  And about their relatives…nothing like the kind of casket or vault or how much money they made, that’s not my interest.  My interest is, like even their street addresses, relatives, jobs, veteran’s status.  Something that a family is just going to love to know.
You do this kind of record keeping and the numbers and the statistics and where it happened, that always sticks in your mind.  Numbers tell stories.
Joy Neighbors:
You are the people putting this information together….
Dan Wilson:
Uh-huh..yes.
Joy Neighbors:
And all because you really have an interest in history?
Dan Wilson:
In history. And also, my guys who take care of the cemetery.  We only have two full time guys, and part time, but the full time guys love it because there’s not……….they go over a grave, they know something about the person.  You know, it’s like that guy owned that, or he did this.  And I’ll give you an example, there’s a lady buried down there by Raben Tires, interesting I think, a part of history.  She was a stripper.  And she was a stripper at Jack Ruby’s club in New Orleans.  And she was found dead in New Orleans like in 1968.  And, I won’t go into who she was, but to me that’s interesting.  That’s cool history.  I mean, you know, you actually have someone here who was involved with Jack Ruby, the guy that shot Oswald.  To me, that’s fascinating. 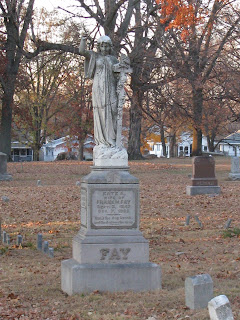 I’ll tell you another one that I like.  There was a husband and wife, and the lady died in, like, Oklahoma. And the guy bought her a coffin with a glass lid and he put her in the back of a pick up truck and was taking her around to different areas and was showing her for, like a nickel a peek, back in the twenties, right?  Well, Gardner Mausoleum has like three mausoleum crypts in the basement that you can slide a casket in, you can seal the door.  And the guy went to Gardner and wanted to know if he could see that this was a good Christian woman and that she deserved better? The guy was out of money.  He said 'Can you keep her here a little bit until I come back?'  I’ll get the money and I’ll bury her.  Well the Gardners’ are nice people and they said sure.  Well she stayed up in the mausoleum for like, ten years. They tried to research the guy and finally found him.  He was in a prison for the criminally insane in Washington D.C.  And when I was going through the records from Gardner’s, there’s a letter that was there from J. Edgar Hoover saying that’s where this guy was. So Gardners tracked him down and he wrote them a letter back saying she was a wonderful woman.  She deserved a lot.  Please give her a nice Christian burial. So they buried her out here. 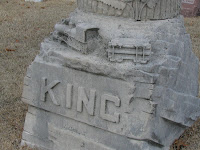 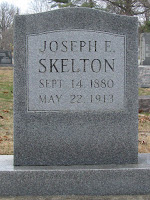 Red Skelton’s father, buried right over here, which is an interesting story.  They never met.  I think Red’s mother was pregnant with him, but he died before he was born.  And see, he never knew him.  His name was actually…It’s not Skelton.  His tombstone will say Skelton, but that’s not what it is.  It’s Joseph Ehart.
Joy Neighbors:
What are some of the superstitions connected…?
Dan Wilson:
Superstitions?  Are we talking ghosts and stuff?
Joy Neighbors:
Any realm of it.
Dan Wilson:
Whenever I started here, we were over in the Green Lawn Cemetery, which was the old part.
And I would go over with a recorder, like that one, just like that one and I would record what I would see on stones.  And I would sit and write this information down so I’d physically have something to bring back and put in the computer.  Not just scraps of paper but notes cause I’m not very smart, I gotta have notes.  And there were times I was in the cemetery and I would hear a voice say my name in my ear and it would happen so fast you would think did you really hear it?
The other day one of the superintendents’ grandsons came here, and this superintendent just passed on last year, named Jack Anderson.  It was really weird; the grandson sat there and said that his grandpa used to have the same thing happen to him.  He would be over there and he would have people whisper in his ear just the same.  And that just gave me goose bumps because the same thing I’ve experienced another superintendent before me, twenty years before, had experienced the same thing.
In the thirty years I’ve been doing this work, the cool things are the relatives who get visited in hospitals by dead relatives right before they die.  All the time.  I mean, all the time.  And you can contribute that to drugs or an altered state of mind, or what ever you want.  But when you hear the same stories over and over, that’s a little too coincidental.
I honestly think death is just as natural as the geese, when they used to fly south, or the birds.  It’s just…it’s scary to us because we don’t know. 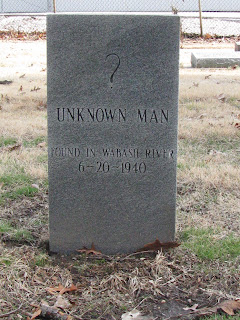 I’ll tell you something that fascinates me, the unknown people.  The people that no one knew who they were. There’s like 40 or 50 people here who are unknown.  And you just wonder who they were.  There’s like seven or eight of them that we got stone for and most them are children, so we got stones for these kids.  One stone I think is cool, it says ‘unknown stranger” and has a big question mark. 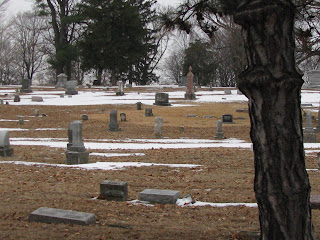 But we’re proud of our records.  I’ve been working on them straight, almost every day, here and at home.  I just like to keep the stories, any thing people know about their relatives.   And every day, when someone dies now, we enter them in every time, like the obituary in the paper, it’s in there every time. The whole obit.   Believe it or not, that’s one of the reasons I do what I do.  I think we owe those people their history.


If you are trying to locate records for a cemetery that does not have a sexton, start by contacting the office of Country or Town Clerk.   Also check with local funeral homes.  They know where many small cemeteries are.
Next Tuesday, we’ll explore death and mortality records.  Enjoy your weekend!
~ Joy
Posted by Joy Neighbors at 5:27 PM