Death records are created at the time of death with information provided by a family member or someone who has in-depth knowledge about the deceased.  This person is referred to as the informant.  Death records are viewed by genealogists as part of a trio of vital records, made up of birth, marriage and death certificates.  They are known as primary sources.
It is interesting that the death record, or certificate, usually has the most information concerning the deceased and is the most recent record available about their life.  Death certificates are considered the best records to use when starting your research due to all of the information provided. The death certificate can also point you toward other searches. 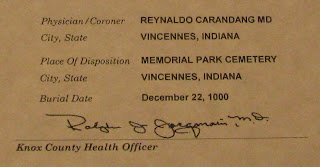 Data listed on a death record includes the full name of the deceased, date of death, and place of death.  This is what makes this a source of primary information. But be aware, even this information can be incorrect.  Notice my grandfather’s death certificate lists him as being buried on December 22, 1000. 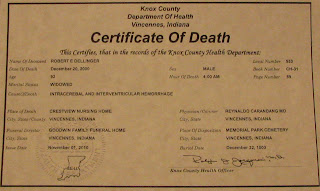 Other information on a death certificate can include age, time of death, cause of death, last residence, occupation, military service, date of birth, place of birth, marital status, name of physician or medial examiner, funeral home, and burial location, along with the name of the informant and relationship to the deceased.  Parent’s names and birthplaces, spouse’s name, if still alive, and possibly children.  A death record can help you verify what you know to be true, but this information should be treated as a secondary source until substantiated.  Remember, the accuracy of most of this information is based on the replies of the informant. 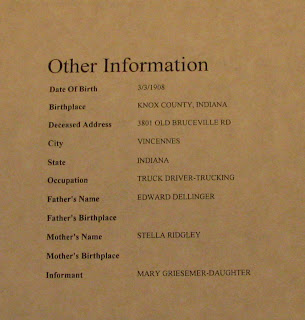 As an example regarding this, my grandfather, Robert Dellinger’s death certificate lists his occupation as a truck driver.  The only truck Grandpa ever drove was a Ford of various models.  However, he and my grandma did run a poultry processing business on their farm.  (I still cannot stand the smell of wet feathers!)  Why Grandpa’s daughter listed his occupation as truck driver, I don’t know.  If you find errors on the death certificate, be skeptical of other information until you can verify it for yourself.
While death records are a great source of information, most states didn’t require them to be kept until the late nineteenth and early twentieth centuries.  New England states have much better death records because their churches have been registering this information for over three hundred years.
Vital records, which include death records, marriage and birth records, may be obtained at the local, county or state level.  Usually the local or county offices can accommodate a request faster that the state.  When requesting a death certificate be sure to specify that you would like a full death certificate.  This can include much more detailed information than the shorter version.  Also be prepared to show ID and verify your relationship to the deceased. 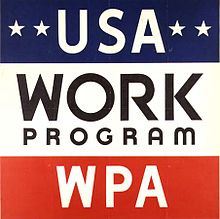 The WPA’s (Works Program Administration) Federal Writers’ Project gathered vital records from the 1930’s through 1943.  They were published as the List of Vital Statistical Records and cover information on births, marriages and deaths in forty states.  Most genealogical libraries usually have a copy.
Mortality schedules are an often forgotten source of genealogical information.  These schedules list the deaths of state residents who died during the twelve months prior to the census being taken. A census taker in 1850 would ask who had died the previous year – from June 1, 1849 to May 31, 1850 - in that household and then list them in the 1850 mortality schedule.  The mortality schedules were recorded for the federal censuses of 1850, 1860, 1870, 1880, 1890 and 1900.
Dates used for the schedules include:
June 1, 1849 – May 31, 1850
June 1, 1859 - May 31, 1860
June 1, 1869 – May 31, 1870
June 1, 1879 – May 31, 1880
June 1, 1884 – May 31, 1885
June 1, 1889 – May 31, 1890
June 1, 1899 – May 31, 1900
Unfortunately, the mortality schedules for 1890 and 1900 have been destroyed. State mortality schedules were taken in 1855, 1865, 1875 and 1885.  Not all states were included in these schedules and not all deaths during these time periods were reported.
Mortality schedules will have information on the deceased including their name, sex, age, color (white, black, mulatto,) month that death occurred in, place of birth, marital status, occupation or trade, parents birthplaces (added in 1870,) cause of death, number of days they were ill, and place where disease was contracted (added in 1880.)
Diseases were usually identified by their symptoms.  The problem with this method is that several diseases may have the same or similar symptoms.  To get a better understanding of some of the medical terms used in the mortality schedules, the Michigan Family History Network Blog has a wonderful listing term and their definitions.  http://www.mifamilyhistory.org/blog/post/2009/04/24/Some-Medical-Terms-Used-in-Death-Records.aspx
Here are two examples of what the transcribed schedules can look like. 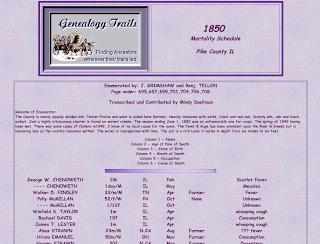 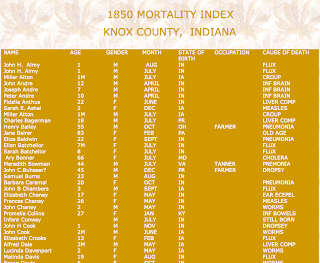 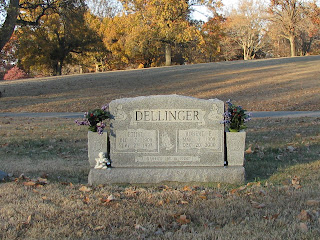 Friday we will wrap up our look at the records of death with an examination of funeral home records.
~ Joy
Posted by Joy Neighbors at 7:00 PM