What Do Cement Grave Markers Tell Us? 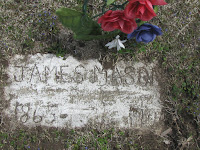 Stroll through enough backwoods country cemeteries and you will eventually find a cement grave marker.  At first, they are surprising to discover, a rough cement stone lying nestled into the dirt.  A marker created when the family couldn’t afford better. 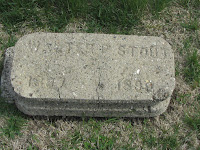 But with more thought and investigation, you realize that the cement grave marker is actually a symbol that marks certain periods in our country’s history – when we have been pushed to improvise with what we had available; the serious economic depression of the 1890’s, the years during and immediately after WWI, and the Great Depression of the 1930’s. 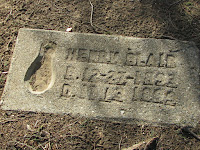 The first was known as the Panic of 1893.  It began with the collapse of the railroads, followed by a run on silver, and bank failures around the country. Unemployment ranged from almost 12% to over 18% during the mid to late 1890’s. All told, over 15,000 companies and 500 banks failed during this period.  Until the Great Depression some 40 years later, the Panic of ’93 was the worst depression the U.S. had ever experienced. 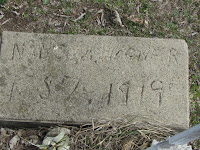 At the start of World War I, the country was again in an economic flux. When the U.S. declared war, financing the war was a major concern.  Higher taxes were called for and short-term borrowing was undertaken as a stopgap. 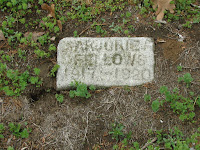 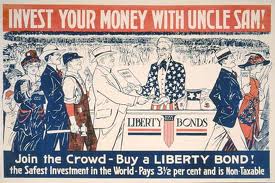 Liberty Bonds were issued and the Food Administration was created to assure a fair allotment of food among U.S. citizens.  Although World War I ended in 1918 with the country looking at an economic uplift, the long term effects of a county ill prepared could be felt for a few years after, especially in rural areas, as seen in country cemeteries. 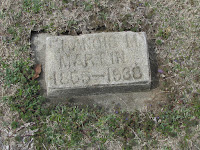 Then came the Great Depression, an economic depression that affected not only America, but also the entire world.  It was the longest and most devastating financial depression of the 20th century. 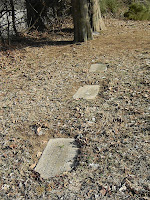 It began in 1929 with the stock market crash, followed by bank failures and a breakdown of the free markets.  The Great Depression continued until the start of World War II. Unemployment was over 20% throughout the U.S. Farming and rural areas were hit hard along with industrial regions. Families were driven away from their farms by dust storms, locusts and bankers. 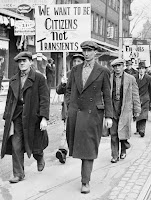 The Great Depression continued until the start of World War II. Unemployment was over 20% throughout the U.S. Farming and rural areas were hit hard along with industrial regions. Families were driven away from their farms by dust storms, locusts and bankers.

During these times of economic despair, burying the dead became a quick and straightforward procedure.  Few could afford monuments, mausoleums or intricate gravestones for their loved ones. 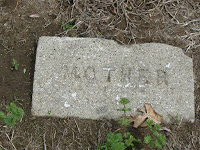 When there wasn’t money for a ‘good’ tombstone, someone in the family would make a wooden mold and form one from cement.  The deceased’s name and death date would be carved into the cement with a stick, or possibly someone’s finger. 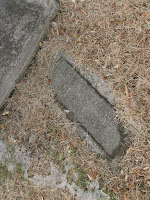 Many times the name and dates were not carved deep enough and did not stand the test of time. During these difficult years there were times, when all that was known of the deceased was a name.  If that was not known, then a date was listed to mark the deceased’s passing. 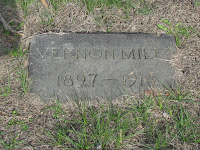 Some cement stones were more formally cast with lettering and decoration stamped in before the cement set up. 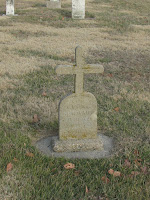 And some homemade stones were fashioned with care into the shape of a cross, as well as could be done with limited tools. 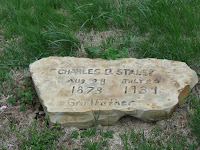 If a family could not afford cement, they were left with using a rock to mark the grave, painting the information on it. 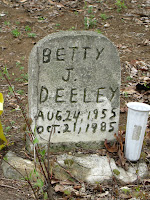 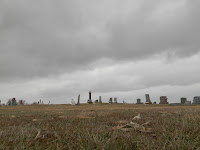 Cement grave markers remind us to pause and consider the historical significance of what we see in cemeteries.  These cement stones and markers were crafted by loving hands and grieving hearts.  They are now are considered to be an expression of folk art, utilitarian stones with a story to tell, both in our cemeteries, and our history.
~  Joy

Posted by Joy Neighbors at 2:07 PM