September is National Ovarian Cancer Awareness Month.  The Ovarian Cancer National Alliance, http://www.ovariancancer.org/ reports that each year in the United States, over 21,000 women are diagnosed with ovarian cancer.  About 15,000 die from it!  Unfortunately morality rates for ovarian cancer have not improved in 30 years.  I was appalled when I discovered the actual current statistics about this disease. (They follow at the end of this blog.)  I began researching this disease because of a grave I found last January in Sullivan County, Indiana for the woman who was the first to survive ovarian surgery.

It was 1809, when Jane Todd Crawford became concerned about a pregnancy that was long overdue. At the age of 46, and a mother of four, she knew something was wrong and that she needed to get medical attention. When doctors tried to induce labor it was discovered that she was ‘carrying’ a 22-pound cystic tumor.  The diagnosis was death.

Crawford refused to give up.  She contacted Dr. Ephraim McDowell of Danville, Kentucky, explaining her condition.  McDowell traveled to Green County, Kentucky and diagnosed Crawford as having a large ovarian tumor.  He was interested in performing an experimental abdominal surgery that might save her life. But he warned her that so far the surgery had never been performed successfully.  Knowing that her condition was fatal, Crawford agreed to allow Dr. McDowell to operate on her. 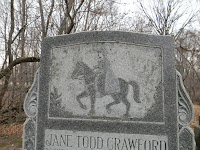 It was a harsh December day when she set out on horseback from south of Greensburg to ride to Danville, Kentucky, a journey of 60 miles.  McDowell had refused to do the surgery anywhere but at his home where he had all of his equipment. 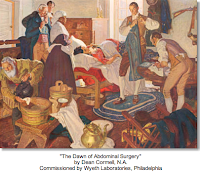 The operation took place on Christmas Day, 1809 in McDowell’s living room.  The procedure took 25 minutes and was scheduled to take place during church services in order to keep gawkers away.  Crawford was given only an oral dose of opium before being cut open. (Anesthesia was not invented yet.) Several attendants held her down while the surgery took place.  McDowell removed a twenty-two pound tumor.  This was the first successful removal of an ovarian tumor in the world!

Crawford’s recovery was uneventful.  She was able to return home in January of 1810.  A few months later the Crawford’s’ sold their land in Kentucky and moved to Indiana.

McDowell became famous as the pioneer of abdominal surgical techniques. He performed the same operation on two more women.  He published his report “Three Cases of Extirpation of Diseased Ovaria” in 1817.  He continued practicing medicine until his death from an apparent appendicitis on June 25, 1830.  His home in Danville is now a museum and a National Historic Landmark.  The Medical Society of Kentucky in Danville erected a statue in his honor in 1879.

Not only did Jane Todd Crawford make history as the first woman to survive ovarian surgery, she gave thousands of women hope concerning a disease that is slow, cruel, and still, difficult to survive.

Women diagnosed at an early stage have a much higher five-year survival rate than those
diagnosed at a later stage.

Fewer than 20 percent of ovarian cancer patients are diagnosed early.

Women diagnosed with breast cancer in 1975 experienced a five-year survival rate of 75.3
percent; today, the American Cancer Society estimates the rate to be 89 percent.

Women diagnosed with cervical cancer in 1975 experienced a five-year survival rate of 69
percent; today, the American Cancer Society estimates the rate to be 71 percent.

Women diagnosed with ovarian cancer in 1975 experienced a five-year survival
rate of 34.8 percent; today, the American Cancer Society estimates the rate to
be 46 percent
Posted by Joy Neighbors at 8:44 PM