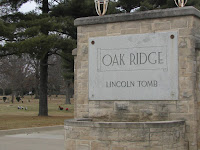 Oak Ridge Cemetery is located in the Illinois capitol city of Springfield.  Founded in 1855, the name was suggested by Mayor John C.Cook because of the large standoff oaks on the original property. Several of those trees remain standing today.  The cemetery was dedicated on May 24, 1860.


Oak Ridge was landscaped and designed in Classical Revival and Romanesque styles.  Primarily known for President Abraham Lincoln’s tomb, Oak Ridge is so much more.  The hilly land consists of bluffs and valleys, with 12 miles of paved roads that meander throughout over 300 acres.   Oak Ridge is on the U.S. National Register of Historic Places.

Abraham Lincoln, the 16th President of the United States, is the most famous person buried here.  Because of this, Oak Ridge is the second most visited cemetery in the U.S.  (Arlington National Cemetery is first.)  Lincoln’s 117-foot Tomb was designed by sculptor Larkin Mead.  It was built of brick covered with granite. Four bronze sculptures surround the tomb.  Each sculpture represents one of the four armed services in the Civil War; infantry, cavalry, navy and artillery.  At the entrance of the tomb is a bronze head of Abraham Lincoln.  The nose is shiny due to tourists rubbing it for good luck.

Once inside the tomb, a marble rotunda contains statues of Lincoln, along with plaques that contain excerpts from his most famous speeches.  There are two doorways in the rotunda – one to enter the tomb by, and the other to exit by.  In the tomb itself, a granite monument marks the gravesite.  Lincoln, his wife and sons are in crypts located in the south wall.  The receiving vault, where Lincoln’s body was held until the monument was built is located at the bottom of the hill, behind the monument.

Others buried in Oak Ridge include Illinois poet Nicholas Vachel Lindsey, considered the originator of poetry as performance art.  Lindsey was one of the best-known poets of the 1920’s and 1930’s in the U.S.  Lindsey apparently committed suicide by drinking a bottle of lye. He was well known for his poems ‘The Congo’ and ‘Abraham Lincoln Walks at Midnight.’

And, not to be missed is the controversial grave of Roy Bertelli, known as Mr. Accordion.

There are several war monuments in Oak Ridge.  Memorials exist for the Grand Army of the Republic (G.A.R.), World War Two, the Korean War, and Illinois Vietnam Veterans. 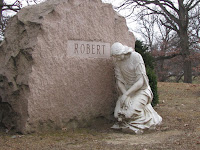 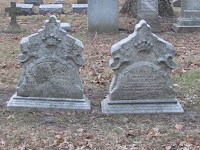 If you go to Springfield, don’t miss Oak Ridge Cemetery.  A visit to Lincoln’s Tomb is a must, but don’t stop there.  Plan half a day and enjoy the beautiful rolling hills, amazing sculpture and pleasantly designed grounds.  Stop by the cemetery office, at the front gate, for a map.  You can also purchase a CD that will guide you on an audio tour of the cemetery and many of its fascinating stones. 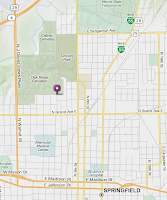 Oak Ridge Cemetery is located at 1441 Monument Avenue in Springfield.  You may contact them by phone at (217) 789-2340.  Or visit the cemetery's web sit at http://www.oakridgecemetery.org.

IT is portentious, and a thing of state 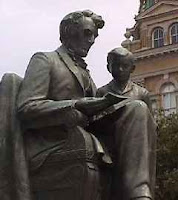 That here at midnight, in our little town
A mourning figure walks, and will not rest,
Near the old court-house, pacing up and down.

Or by his homestead, or by shadowed yards
He lingers where his children used to play,
Or through the market, on the well-worn stones
He stalks until the dawn-stars burn away.

A bronzed, lank man! His suit of ancient black,
A famous high top-hat, and plain worn shawl
Make him the quaint, great figure that men love,
The prairie-lawyer, master of us all.

He cannot sleep upon his hillside now.
He is among us:--as in times before!
And we who toss or lie awake for long

Breathe deep, and start, to see him pass the door.

His head is bowed. He thinks on men and kings.
Yea, when the sick world cries, how can he sleep?
Too many peasants fight, they know not why,
Too many homesteads in black terror weep.

The sins of all the war-lords burn his heart.
He sees the dreadnaughts scouring every main.
He carries on his shawl-wrapped shoulders now
The bitterness, the folly and the pain.

He cannot rest until a spirit-dawn
Shall come:--the shining hope of Europe free:
The league of sober folk, the Workers' Earth,
Bringing long peace to Cornland, Alp and Sea.

It breaks his heart that kings must murder still,
That all his hours of travail here for men
Seem yet in vain. And who will bring white peace
That he may sleep upon his hill again?