Oak Hill Cemetery located in Evansville, Indiana began in 1853. Located along the curve of the Ohio River, this hilly, rural-style cemetery is made up of 175 acres. Although now located in a thriving section of the city, Oak Hill has retained its quiet, Victorian charm.

The land for the cemetery was originally purchased in 1852 and the first to be buried here was 2-year-old Ellen Johnson on February 18th, 1853.  A local paper of the times described the land selection as “a “hillock, a wilderness of underbrush and briars, and called at that with a mantle of loess, underlain by sandstone.”

The cemetery entrance is located on Virginia Street and the drive up to the Mission Revival gate and brick-walled fence is 365 feet long.  Architects William Harris and Clifford Shopbell designed the entrance gate in 1901.

Harris and Shopbell also designed the Craftsman style Administration Building in 1899.  It contained an office, waiting room and chapel. The building was remodeled in 1917.  It still contains the central bell tower and massive fireplace, with a 3-sided porch surrounding it.

The cemetery grounds are made up of numerous hills.  Most of the landscaping was done between 1853 and 1932 and has grown into a place of beauty and seasonal color.  The cemetery is a treasure-trove of trees, many native to the state of Indiana.   While pine, maple, willow, and oak abound; it was interesting to see several magnolias, and one of the largest ginkgo trees in the U.S. is located here. 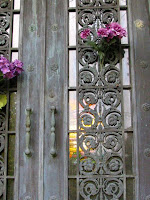 A large man-made lake is on the grounds, surrounded by mausoleums crafted from marble, limestone and granite.  Local architects designed many of the mausoleums and their intricately laced doors.  A stone pedestrian walking bridge crosses to a small island where the Mead family (of Mead-Johnson fame) is buried.

Also buried here is Annie Fellows Johnson, author of the over a dozen of the children’s Little Colonel book series. Born May 15, 1863 in Evansville, Johnson wrote for years about her Little Colonel, a “precocious young girl growing up in aristocratic Kentucky prone to bullying and temper tantrums.”  Over a million of the books were sold at the turn of the century.  The series of Little Colonel books inspired a movie by the same name, starring Shirley Temple and Lionel Barrymore.


Records also indicate the King and Queen of a tribe of Romany Gypsies are buried here.  Elizabeth Harrison, Queen of the Gypsies, died in November 1895, in either, Massachusetts, Mississippi, or Ohio.  Her body was shipped to Oak Hill Cemetery and held in the receiving vault until members of her camp could meet to attend her funeral. Services were finally held on April 1, 1896.  Over 6,000 people were on hand for the graveside services, fifty of them Gypsies.  It was the largest funeral ever held at the cemetery.

On Christmas Eve, 1900, Harrison’s husband, Isaac was buried beside her.  Isaac Harrison, King of the Gypsies, had been killed by a bullet on December 1st, in Alabama, in a fight between his sons.

Oak Hill has a Civil War military cemetery section that includes over 500 Union soldiers and 24 Confederates.  Surrounded by heavy chains, with two Civil War cannons, it is a moving tribute to those fallen men.

A Confederate Solider stands at the intersection of two lanes, one that leads to the military section.  The statue was erected at the turn of the twentieth century by the Fitzhugh Lee Chapter of the Daughters of the Confederacy in remembrance of the 24 Confederate soldiers buried on Yankee soil.

A Union Soldier also stands in Oak View Cemetery as a reminder of the hundreds of local men and boys who died during the Civil War.

Other notables interred here include over a half a dozen U.S. congressmen, along with several Civil War officers and Indiana’s 5th Governor, Conrad Baker.

Assistance on genealogy research is available by contacting Cemetery Superintendent Chris Cooke at ccooke@evansvillegov.org or by calling (812) 435-6045.  For a list of many of those buried here, visit the Vanderburgh County, Indiana InGen Web Project http://www.ingenweb.org/invanderburgh/cemeteries/oakhillcem.htm

Oak Hill continues to fulfill its purpose of being a place of relaxation and contemplation.  As first stated in the 1800’s, and still true today, Oak Hill is there for those who “become wearied with the sight of human faces, when the noise and bustle of the city grate harshly on the ear, when we feel an inward yearning for some quiet spot where we may rest in seclusion, undisturbed and alone.”