(Indigent as defined by dictionary.com, “lacking food, clothing, and other necessities of life because of poverty; needy; poor; impoverished.) 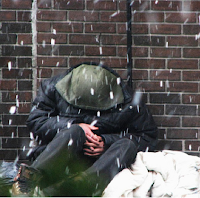 As we approach December, the weather becomes colder.  This means that many indigent people without adequate shelter and lodging will face sever hardships, some even death.

The most common causes of indigent deaths are due to poor health or exposure to the elements, especially in the winter.  Other causes include disease, drugs or alcohol, and violence.

What happens when a person who is considered to be indigent dies without the where-with-all to plan or pay for a funeral?  It depends on where they die. Usually the county, town, or township where they have died will handle the details.

Qualifications for indigent burials vary, again, depending on where the death occurred.  Most counties or states will require that proof of financial hardship be provided, along with other documentation such as bank statements, pay stubs, motor vehicle, and real estate records.

If the indigent person is homeless, the coroner’s office, or a local hospital may conduct a search to try and locate family. Since the homeless usually carry everything they own with them, many times a social worker’s name, or that of a family member or friend may be found among their possessions.

Other forms pertaining to any government assistance, Veteran’s benefits, or Social Security may help to identify the deceased and locate relatives.  If there are no leads, an investigation may research local missing persons to see if there is a match with the deceased. 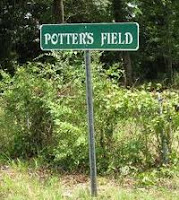 Depending on where the person dies, an indigent may be transferred to a medical school for research or dissection education, cremated, or given a basic burial in the local Potter’s Field.

If an in-ground burial is given, it will typically include embalmment of the body, and placement in a burial box, usually made of particle board – wood scraps and sawdust glued together. The deceased’s name is written on top of the box, if it is known.  A Committal Prayer may be said at the graveside before burial. A numbered, metal stake will be placed at the grave, since headstones are usually not provided.

When the indigent die in the city, there may be one day of each week that is designated for these burials.  The deceased will all be taken at the same time to the local cemetery’s Potter’s Field where the graves are dug and a backhoe waits to fill them in.

But there are places in this country where they are attempting to bury their homeless with some remaining dignity.

One such area is in Louisville, Kentucky.  Students at Louisville Catholic schools, as well as the University of Louisville and Bellarmine University, are working with the Jefferson County’s Coroner’s office to help provide burial services for the indigent.  Students attend the graveside services, and some also volunteer to act as pallbearers.

The Jefferson County Coroner’s Office is the sponsor of a program that provides permanent markers for the indigent as a way to “acknowledge their time on earth.”   The program, known as “Be a Memory Maker,” raises money to purchase grave markers for the indigent, mentally ill, disabled, or disenfranchised who die in the community.  A grave marker costs around $300.  To find out more about the program, visit http://www.louisvilleky.gov/Coroner/SpecialPrograms.htm

In New York, the Hebrew Free Burial Association makes arrangements for indigent and impoverished Jews in New York City to receive prompt, dignified funerals and burials.  The HFBA began in the 1880’s and is the largest free burial society outside of Israel.  They have provided over 60,000 burials since 1888. The HFBA owns two cemeteries on Staten Island: Mount Richmond Cemetery and Silver Lake Cemetery.  As many as 300 people receive free burials each year in consecrated Jewish earth.

The HFBA also has a program, Leave Your Mark, which places simple permanent markets at unmarked graves in Mount Richmond Cemetery.  A grave marker costs $150.  To learn more about the HFBA and the Leave Your Mark program, visit http://www.hebrewfreeburial.org/about_HFBA.html
To donate, go to http://www.hebrewfreeburial.org/about_HFBA.html

For those who were lonely, and alone, at the time of death, these small acts of compassion allow some dignity and respect to be paid to their memory.