There are an estimated 300-million gamers online in the world today.  And anything can happen in an alternative world; even death can become a reality.

Although players may never have met, they still share a social life within the game, develop complicated and lasting relationships, and learn to care for their own. When a fellow gamer dies, the most human desire to memorialize them occurs.

Over 900-million online games exist, and many of these game designers allow for the development of grave stone monuments and memorials. In the massively multiplayer online (MMO) game, World of Warcraft (WoW), the deaths of players have been memorialized since the game’s release in 2004. The way the gaming world handles real life death allows us a look into how society may respond to death, on the internet, in the future.

In WoW, the Shrine of the Fallen Warrior is a memorial to nineteen-year-old Michel Koiter.  Koiter worked for Blizzard Entertainment as an illustrator on World of Warcraft.  He died of heart failure during the game’s development in 2004.

The Shrine of the Fallen Warrior memorial is a stone monument, inscribed with the letters MK, located on top of a mountain.  There, the body of an Orc warrior is laid to rest. A spirit healer floats above the warrior’s body. The Orc warrior was the beta character that Michel played during the first test phases of the game.

In honor of Michel Koiter and his WoW persona, his twin brother, Rene Koiter, wrote the following poem:

Shrine of the Fallen Warrior in World of WarCraft 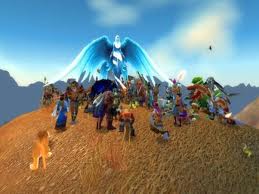 
Another Blizzard employee, Jesse Morales also died while the game was being created. A headstone, inscribed with the epitaph, “In loving memory of Jesse Morales”, was created and placed in a village cemetery in the game.


Then there is the story of Ezra Chatterton. After a devastating house fire that left the family with nothing, Ezra’s father, Micah took some of the insurance money and purchased a computer and subscription to World of Warcraft for his son.  The game became something for them to do together – a way to bond.

In 2007, Ezra was diagnosed with a brain tumor.  He told the Make-A-Wish Foundation that he wanted to visit the headquarters of Blizzard Entertainment, designers of World of Warcraft.  The Blizzard team brought the father and son to their Irvine offices and put Ezra on the development team for the day.

During his seven-hour visit, Ezra designed a weapon, a quest, and a non-player character named Ahab Wheathoof, and his dog, Kyle. (Ezra’s dog was named Kyle.)  Ezra then provided the voice for several phrases Ahab Wheathoof says. Wheathoof is one of only a few characters in the game that has a voice. Ezra was the first person outside of the company to be allowed to create a character. 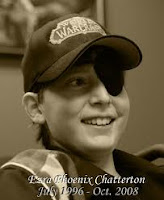 On October 20, 2008, Ezra died. The gaming community reacted by organizing an online gaming event to raise money for the Make-A-Wish Foundation in Ezra’s honor. Over 1,000 players responded.  The server crashed and the event was cancelled, but Ezra's spirit will live on in the game.


On September 11, 2012, the U.S. Consulate was attacked in Benghazi, Libya.  Gamer and Foreign Service Information Management Officer, Sean Smith died in the raid.

Smith was well known for his diplomacy skills for the U.S. government, and in the game EVE Online.  An enthusiastic gamer, Smith was known as “Vile Rat” in the EVE community.

Smith, or Vile Rat, was a member of the EVE Online Guild Goonswarm.  He acted as a senior guild diplomat. Many players say he actually shaped the way the politics work in EVE Online. Smith was well known and well respected in the gaming community.

Smith was in contact with EVE players just before the raid, sending a message, which said, ”Assuming we don’t die tonight. We saw one of our ‘police’ that guard the compound taking pictures.”  Smith was remembered in a tribute on the EVE online community as “one of the best and most effective diplomats this game has ever seen.”

An actual memorial for Sean was discussed but gamers decided that the player-made tributes and remembrances were more in keeping with the spirit of the game.  The EVE Online community held a fiery tribute for Sean on September 15th.

In the end, it doesn’t matter if the memorial is in a game or in a cemetery.  What does matter is being able to pay tribute to someone special.   In this life and the gaming life, it's about finding a way to honor those we feel have left the game too soon.