Neptune Society Memorial Reef – A City of the Dead

Just three miles off the coast of Key Biscayne, Florida, lay a mystical underwater world – A recreation of Atlantis, the Lost City.  But this Atlantis is a destination for marine life, scuba divers, and the dead.

Also known as the Atlantis Memorial Reef, or the Atlantis Reef, the Memorial Reef began in 2007 when the Neptune Society decided to create a ‘replica’ of the Lost City of Atlantis.  The Reef is located 40 feet below the ocean’s surface and was originally designed as an artistic project.  The focus of the venture soon changed and it was developed into the world’s first underwater “cemetery”, actually a cremation memorial park.

Although technically not a cemetery, the Memorial Reef does contain the cremains of over 200 people, with room for another 600 during the first phase.  The goal of the society is to eventually provide a resting place for over 125,000 remains that will spread over 16 acres of ocean floor.

The Neptune Society, the largest cremation-only provider in the U.S., takes cremated remains and mixes them with cement before placing them in a mold. Once the mold is formed, the shaped piece is then taken down to the City and placed on the Reef with a memorial plaque.  There, the molds become a permanent part of the ever-changing man-made reef.

The Memorial Reef opened in 2007.  It is the largest man-made reef in the world.  Statues, gates, columns, benches, and roads make up the underwater city. Divers, researchers, marine biologists, and students are encouraged to visit the area, but fishing and lobstering are not allowed here.

A marine study conducted in the area reports that the Memorial Reef is developing faster than originally expected, and is attracting a multitude of marine life.

The Memorial Reef is a natural green burial option, certified by the Green Burial Council.  The Reef promotes coral and marine organism growth, thus allowing you to become part of the underwater ecosystem.  Placement on the Reef begins around $2,000. 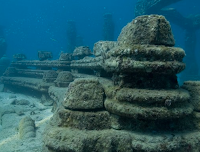 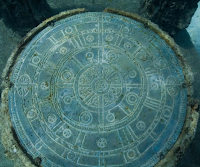