One more week before the hand brace comes off - so here is a post from 2011 about the Hagenbeck-Wallace Circus Tragedy, which happened 95 years ago this week. 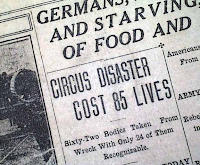 It was around 4 A.M. on June 22, 1918, near Ivanhoe, Indiana when the 26-car Hagenbeck-Wallace circus train stopped to cool an overheated wheel-bearing box.  Although warning lights had been set out to signal that the train had stopped on the tracks, it was struck at full speed from behind by an empty troop train.  Three of the train cars, with sleeping circus workers in them, were destroyed by fire. Eighty-six performers, circus hands and roustabouts were killed as a result of the crash and fire. Many others injured. Fifty-six of the victims were buried at Woodlawn Cemetery at Showmen’s Rest.  The Showmen’s League of America donated the plots for the showmen’s burials.

Among those buried were Jennie Ward Todd of the “Flying Wards.”  And the “Great Dieckx Brothers,” Arthur Dieckx and Max Nietzborn.

Two performers were buried under their show names, ‘Baldy’ and ‘Smiley,’ as their real names were never known.  A few stones are marked only with the person’s job descriptions such as 4 Horse Driver, June 22, 1918.  Contrary to popular myth, NO animals were hurt or killed in the train crash.

The Hagenbeck-Wallace Circus was the second largest circus in the U.S. at the time.  Ringling Brothers & Barnum & Bailey held the number one position.  Many Hagenbeck-Wallace show posters included the line “Presenting The Most Novel Elephant Acts Ever Seen.”

Circus performers from around the country arrived to help Hagenbeck-Wallace Circus keep to their performing schedule for that season. All told, the circus only missed one performance, the night of June 22, 1918 when they were to appear in Hammond, Indiana.

It is true that performers and actors never want to “leave the boards” of the stage, and at Showmen’s Rest, in Woodlawn Cemetery, that desire is understood.  Each year, International Clown Week http://performforthelove.com/showmensrest/ is held in early August.  A private memorial is held during the week for the circus performers buried there.  Then, on a Sunday afternoon, circus artists from across the world perform for the public at Showmen’s Rest. The events include circus acts, death-defying feats, family entertainment and general “clowning around,” as hundreds of clowns take part each year.  The event is billed as “a loving and festive remembrance of circus artists past.”

As a theatre performer I can tell you, this is one of the most fitting and touching tributes any performer could ask for.  The old adage, “The show must go on…” is something every true performer believes. It is wonderful to see that it still does……at Showmen’s Rest.