The Kiosk of Death at the Mall

Now, it seems, you can have it all. One-stop lifetime shopping from baby clothes, to wedding supplies, to tax services, and funeral arrangements.

The cart kiosks are low key, featuring urns, some with themes, to entice folks to stop and talk to the advanced planning representative that staffs the cart. Literature and brochures are also available and may be taken home and perused.

While at first the idea seems a tad unconventional, it’s really just another way of

reaching out to those who might want to pre-plan for death but can’t bring themselves to go to the funeral home or a cemetery.

But Forest Lawn is not the first funeral home to open a mall kiosk about death.  An Indianapolis, Indiana funeral home, Flanner & Buchanan Funeral Centers partnered with two Indianapolis area Simon Malls beginning in 2004 to provide unmanned kiosks to market their cremation services.

It proved to be very successful, not only in assisting people in making pre-need decisions but also in placing several sets of cremains in area cemeteries. 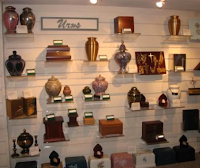 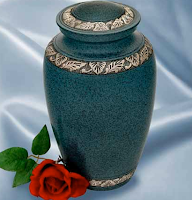 Cremation is now the fastest growing service for funeral homes, and having the ability to feature urns, photos of eco-green cemeteries, and cremation jewelry at a mall kiosk is an excellent strategy. It seems that most consumers view cremation as an alternative to a funeral. They don’t understand that a funeral service can still be held, and the cremated remains can also be placed in a cemetery plot.

Today, not only are funeral homes stepping out and becoming more visible, they are also starting to engage potential customers online through social media. Since the recession of 2009, funeral homes have seen a decline in the use of their services.

Consumers are now looking for alternative methods to the traditional ‘burying their dead.’ Cremation is just one of these options, along with burial at sea and donating your body to science.

And the cost of cremation is a relative bargain compared to a traditional funeral and burial. The average cost of a direct cremation (no service) is between $700 and $1,000, and that covers the cremation, urn, death certificate and taxes. Adding a funeral service, graveside service, or cemetery plot will cost extra, so plan accordingly.

In 1960 only 3.56% of those who died were cremated. As of 2011, 42% had chosen this alternative. That’s more than double the rate of cremations in 1995, and the Cremation Association of North America http://www.cremationassociation.org predicts that by 2050, over half (51.12%) of those who die will be cremated.

While it may seem a bit morbid or morose to some, it is just another opportunity for each of us to consider what we want to happen to our remains after death and provides a way for that conversation to begin; even if it is at the mall, over an Auntie Ann’s pretzel, – it’s still a beginning.