Once again, the month of October is upon us…. a time for hauntings, Halloween - and all things spooky.  This month, A Grave Interest is traveling around the Midwest, taking ghost tours and getting a look at some ‘lively’ places, and, maybe, the spirits who make them so… 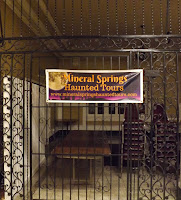 On a cool, rainy night about 30 people milled around in the foyer of what was once a grand hotel in Alton, Illinois. First, let me preface by saying that Alton has the reputation (well earned, I might add) of being one of the most haunted towns in America.

The building we were in was, at one time, the Mineral Springs Hotel; given the name because of the mineral springs that flow below the building. At the turn of the century sulfur springs were thought to have healing properties. Here the water was pumped up inside the building to be bottled and used as cures for a variety of aliments. The hotel opened in 1914 and thrived for several decades before finally closing in 1971.

The building was reopened in the late 1970s as an antique mall and has had a rocky time since then. Today it is home to a few shops, the Torture Museum, and Mineral Springs Haunted Tours, which is where we began this night with tour owner, Janet Kolar.

After “checking in” we proceed to our vehicles and followed the Mineral Springs Haunted Tour hearse "Pearl" to the Alton Cemetery. There we were told about several prominent Alton residents from the past as we visited their graves.

At the plot of the Bell Family, our guide told of a young girl, Sarah Bell, who died when she was around 10 years old. A small limestone marker was placed in the family plot to mark her grave, but it soon disappeared. Her mother was inconsolable and continued to search for the stone until her death some years later. After she died, an apparition of a lady in black was seen walking in this area of the cemetery, apparently searching for something.


The story could end there but circumstances added a final chapter. A few years ago, a man in Edwardsville, Illinois (18 miles from Alton) contacted the cemetery wanting to return a tombstone he had found buried in his backyard. He had unearthed it while digging a foundation. The stone was that of Sarah Bell, missing for over 100 years. Since it has been returned to the family plot, the lady in black has not been seen… 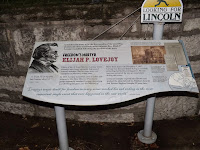 The grave of abolitionist Elijah Lovejoy is also located here, inside a small iron fence. Lovejoy began printing an abolitionist newspaper called The Alton Observer in 1837. But one year later a pro-slavery throng attacked his printing store in an attempt to destroy his press. During the melee, Lovejoy was fatally shot. Orbs and lights can sometimes be seen streaking past his grave, as if he is still trying to run his presses.

About midway through the tour, a séance was held down a dark cemetery road. Several took part, although participation was optional. Orbs and streaks of light were reportedly seen in the cemetery at that time.

We then headed back to the warmth and light of the old Mineral Springs Hotel where refreshments were served in the Crystal Room. Then we began a tour of the old hotel, which has been called the most haunted building in Alton – and in this town, that is claiming a lot!

Things have gone “bump in the night” here for years. And tales of murder, suicide, and vengeance are abundant. Former employees, shop owners, and guests report phantom footsteps, cold spots, and an eerie feeling of being watched throughout the hotel.

In the basement is a swimming pool; said to be haunted by several sprits including a young girl, a man, and a woman. Wet footprints have been seen near the pool, which has been without water for years. Splashing sounds have been heard in the basement but when investigated there are no sounds, and again, there is no water.


Another spirit that seems to linger here is that of Charlie, a painter who could not pay his lodging bill in the 1930’s. Instead of running out on his tab, Charlie offered to paint a mural of Alton on one wall of the bar. The owner agreed and Charlie worked off his debt, while also working behind the bar at night. Legend has it that something made Charlie despondent and he took his life one night.

Staff and customers have reported smelling alcohol in this section of the building and of having the feeling of being watched. The guide on this tour said that Charlie has been known to follow some women from the tour back home, but once he’s told to go away, he returns to Mineral Springs.

Probably the best-known ghost is that of the Jasmine Lady. The story goes that a woman and her husband came to the hotel to enjoy the healing waters around 1925, but while staying here she became involved with another guest.


One evening, when her husband was gone, she entertained the man in her room. Her husband returned unexpectedly and found the two. Panicked and terrified, the woman ran from her room and plunged down the stairs in an attempt to reach the safety of the lobby. What really happened is not known; did she trip while running down the stairs, or did her husband push her?  Either way, the result was a broken neck during the fall. She died immediately.

Several employees, staff and guests have witnessed the replay of the Jasmine Lady’s fall down the stairs. Some catch a whiff of jasmine perfume that seems to linger around the staircase. Others have reported feeling something brush past them on the stairs, and some have seen business signs in the hallway swing back and forth as if moved by a sudden gust of air. 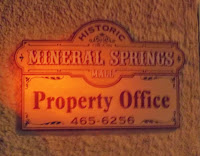 Mineral Springs Haunted Tours offers several walking tour adventures, after dark, in the downtown area, and in the cemetery, which also includes a tour of the hotel. Or, if you’re feeling very spirited, you might consider an exclusive overnight camp-out in the pool area.

For more information about tours and times, visit their web page at www.mineralspringshauntedtours.com and the Facebook page at https://www.facebook.com/MineralSpringsHauntedTours?ref=br_tf

This is one hotel, that as the song says, “You can check out anytime you like” - but at Mineral Springs Hotel it appears that there really are some former guests “who can never leave…”