Once again, the month of October is upon us…. a time for hauntings, Halloween - and all things spooky.  This month, A Grave Interest is traveling around the Midwest, taking ghost tours and getting a look at some ‘lively’ places, and, maybe, the spirits who make them so…

I decided early on that it would be smart to get some guides for these haunted jaunts. And
who better to seek out than the local experts on all things paranormal in their towns.

On this balmy evening about 30 people stand on a darkened Westfield Indiana parking lot waiting to be conducted on a ghost tour with Underground Railroad connections. One of the partners of Historic Indian Ghost Walks & Tours, and our guide for the evening, is Michael Kobrowski.

Michael and his wife, Nicole began their publishing company, Unseen Press http://www.unseenpress.com back in 2000, and the next year developed a ghost tour that centered around Westfield and its “Ghosts of the Underground Railroad.” Michael leads most of the tours, which are offered year-round. Nicole writes books about paranormal in the area; her latest was released just last month, and both go on paranormal investigations.

North Carolina Quakers Ala Bales, Ambrose Osborne, and Simon Moon founded Westfield in 1834, planning for it to be an Underground Railroad stop. The Quaker community was one of only six stops in the state that helped to hide, feed and clothe runaway slaves before they headed northward to South Bend.


One of the stops on the Underground Railroad was a hotel on the main street. A Mrs. White ran it during the 1840’s and helped slaves escape the slave hunters who came after them. In the 1930s, a mortuary moved in and purchased the adjoining building to create a large funeral home. When that business moved, another business purchased the structure and placed offices in it.

But everyone knew the former hotel was haunted. The hallway that adjoined the two original buildings always felt odd, as if you were being watched. Footsteps would be heard upstairs when only one person was in the building. People reported seeing a woman standing on the stairs who when approached would simply fade away. 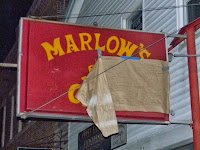 And just a few doors away another building had similar happenings. It had housed a grocery store, an office and several other businesses before it became the home of Marlow’s Café. Marlow’s was located there for over 30 years before recently being sold.


Restaurant employees reported that the kitchen area was very haunted. It was not unusual for servers and kitchen help to have their aprons untied as they worked. The stove burners would suddenly increase temperatures and food would burn. Several people have seen a dark shadow in the restaurant. A woman, who had worked in the building when it held offices, said that one night, when she was there alone; she heard an office chair begin moving in the next room. When she went to look, the chair was swiveling as if someone was sitting there. She retired shortly after.


The Westfield Savings and Loan stood proudly on a main corner for years until it was closed in the 1970s. Since then the building has been a café, artist studio, mortgager company and hair salon. Many tenants have reported something strange is going on in the building, especially around the staircase.

One person with an office upstairs reported coming in some mornings and finding everything on the desk thrown to the floor and furniture moved. The building's heat gets turned up to an uncomfortably hot level in the winter. Repairmen came in to check out the furnace and controls but no malfunctions were found. Some have seen an older man in bibbed overalls standing at the top of the stairs gazing down.

The basement is also haunted. A woman who worked there went downstairs to retrieve something from the old safe that was being used for storage. Suddenly the door slammed shut and she was trapped inside. (Good thing we live in a time when help is only a cellphone call away.)

A doorway to an underground tunnel has been found in the basement. It is considered part of the Underground Railroad and links this basement to the basement of Jan’s Pizza, located across the street.


It seems that the Westfield City Hall is also haunted.  Lavender perfume can be smelled in the building, along with diesel fuel. Employees have reported seeing a man walking up and down the stairway dressed like a fireman.

On one of the Ghost Walks, several people saw a man floating about 8 feet off the floor in the assembly room. Window blinds have opened and closed when no one was there, and people have been physically touched and scratched on the tour.


Appropriately, the tour ends in the Anti-Slavery Friends Cemetery. This is the darkest part of the tour and the crowd quieted considerably when we entered the gates. A Union soldier is rumored to patrol these grounds. He has been seen leaning against a tree in the cemetery, before disappearing. He is known to walk the perimeter of the cemetery, stopping near one grave in particular – that of a Union soldier who died just after the war’s end. 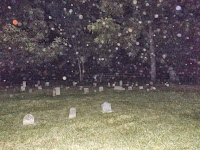 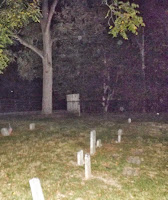 People who have worked in the cemetery doing repairs have seen shadows and felt a presence nearby; someone might blow on your neck in a teasing manner, but then again, others have been scratched when not treating the cemetery and its “residents” with respect.

Unseen Press now offers six ghost walks and have added three Ghost Bus Tours to the lineup. Walking tours last between 1.5 and 2 hours, and cover about 1.5 miles. Bus tours may be longer. Visit the webpage http://www.unseenpress.com/general/tours.htm or Facebook http://www.unseenpress.com/general/tours.ht for more details and to make reservations. 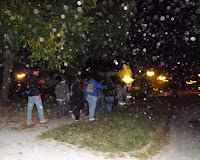 And don’t be too surprised when you get home and check out the photos you took (on a clear night, in 75-degree weather). Some things are easier seeing to believe…