The History of the U.S. National Cemetery System


The National Cemetery System was developed as a way to provide a respectable and honored burial location for Civil War soldiers killed defending the Union.  In the Act of July 17, 1862, Congress authorized President Abraham Lincoln "to purchase cemetery grounds ... to be used as a national cemetery for soldiers who shall have died in the service of the country."  This was the first U.S. legislation to set in motion the concept of a national cemetery.


Before the national cemeteries were developed, soldiers were buried where they fell, at military posts, or the body was sent back to the family for a private burial.  A headboard was usually placed at the grave with the soldier’s name and information either painted or written on in chalk.  Since the wooden markers could not withstand the elements, the boards deteriorated rapidly and burial sites were lost.

In July of 1862, the Army’s Quartermaster Department was assigned the task of establishing and maintaining the national cemeteries. After the end of the Civil War in 1865, the program began in earnest – to search for, locate, recover, and identify the remains of all Union soldiers, before re-interment in a national cemetery.  By June 1866, over 1 million dollars had been spent re-interring the war dead.  The Quartermaster General estimated that over $2.6 million would be the ''total cost of national cemeteries, and collection, transfer and re-interment of remains of loyal soldiers.'' The average cost of re-interment for each body was $9.75.

The first National Cemetery Act was passed on February 22, 1867.  It provided funding in the amount of $750-thousand for the construction of national cemeteries, including the purchase of land, fencing and head stones.  The act also set some rules into place regarding conduct in a national cemetery stating, “Any person who shall willfully destroy, mutilate, deface, injure, or remove any monument, gravestone . . . or shrub within the limits of any said national cemetery” would be arrested and found guilty of a misdemeanor.

The headstone design was subject to several years ofdebates.  Many materials were suggested for use, including cast iron.  Final approval and the appropriation of 1-million dollars was given by Congress, in March 1873 for the erection of a marble or granite headstone, measuring 12 inches high by 10 inches wide by 4 inches thick, with a slightly rounded top.  Name, rank or affiliation was placed in a federal shield carved into the stone.  Headstones for the regular Army soldiers were marked as “USA.”  Stones for the U.S. Colored Troops were marked as “USCT.”  Stones for ‘contrabands’ and civilians were not allowed.


Marble or granite headstones for those whose remains were unidentified measured 6 inches high by 6 inches wide and 30 inches deep.  They were marked only with a number and/or by the words “Unknown U.S. Soldier.” Forty-two percent of the bodies and remains recovered were never identified.

It took eight years for the interment of nearly almost 300,000 Union remains into designated national cemetery grounds.  Of those, over one hundred thousand were not identifiable. In 1870, General Montgomery Meigs declared the reburial project to be completed with a total of seventy-three national cemeteries created.  However, more would need to be started in the West where fallen soldiers had been abandoned at their frontier posts. 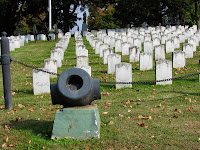 During the 1870’s several amendments were added to the National Cemetery Act of 1867 to allow the burial of Union veterans in national cemeteries.  In 1872, an amendment was passed to allow “all soldiers and sailors honorably discharged from the service of the United States who may die in a destitute condition, shall be allowed burial in the national cemeteries of the United States.”

Landscape architect, Fredrick Law Olmsted was called in to offer his opinion on the appearance of the national cemeteries.  Olmsted advised, “The main object should be to establish permanent dignity and tranquility ... sacredness being expressed in the enclosing wall and in the perfect tranquility of the trees within.”

As a result, trees and shrubs were added to the national cemeteries, flowers were planted, and stone, brick or iron fences enclosed the grounds.  Many times cannons and other artillery were added as cemetery monuments.


In June of 1881, General Meigs issued a recommendation that “Arlington Cemetery, … be declared and constituted by law the official national cemetery of the government, and that its space, not needed for the interment of soldiers, be used for the burial of officers of the United States legislative, judicial, civil, and military, who may die at the seat of government or whose friends may desire their interment in a public national cemetery.”


In 1906, over forty years after the war, legislation passed that allowed the re-interment of Confederate soldiers in national cemeteries.


There are now 146 national cemeteries located throughout the United States and Puerto Rico which bear the title of National Cemetery.  Many are on or near Civil War battlefields, or troop concentration points such as military hospitals and campsites. 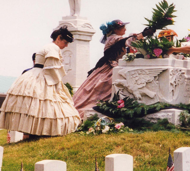 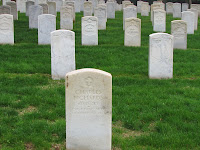 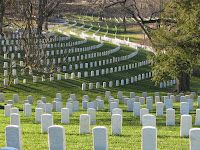 Since 1862, more than 3-million burials have occurred in national cemeteries.  The purpose of the National Cemetery System remains the same as it did 151 years ago; to provide a proper burial service, headstone, and interment in hallowed ground for veterans, those on active duty, reservists and National Guard members who have, or continue to, serve and defend our country.