The Symbols of Autumn


Today is the first day of Fall, also known as the Autumn Equinox. It’s that time of year when the days become shorter and the nights grow longer in the northern hemisphere.  It is one of only two days in the year, (the Spring Equinox being the other,) when daylight and darkness are of equal time.

The arrival of autumn has been celebrated for centuries, from ancient Egyptian times, to the present, with harvest festivals. These festivals are usually held at the end of the growing season. People throughout the ages have commemorated the hard work involved and the abundance of foods available; pumpkins, corn, squash, beans, wheat, apples and nuts, during this season of plenty.

At harvest festivals contests were held, music was played, bonfires were built and plenty of eating and drinking took place. It is no wonder that in the Western Hemisphere, autumn is depicted by full, lush women bearing ripened fruits and grain.  The North American Indians also had many festivals tied to autumn and gathering food from the wild to prepare for winter.

The harvest moon is another symbol of autumn.  This is the full moon that occurs at the closest time to the Autumn Equinox.  Usually it is in September, but it can occur in October, as it did in 2009 and will again in 2017.  The full harvest moon was so named in the eighteenth century because it was bright enough that farmers could work into the night by it’s light.

Autumn is a time of melancholy for some.  The end of the summer’s warmth and light has come, and the prospect of cold and darkness lay ahead for many months.  It is a season that inspires you to look inward, to reflect and consider the choices you have made, and the options still open to you. 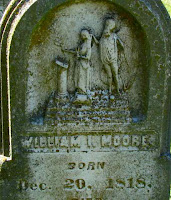 Death is also linked to the autumn and harvest.  Crops were gathered from the field in autumn by reaping with a sickle or scythe. So too were souls depicted as being gathered from the earth.  The Grim Reaper, also known as the Angel of Death, first came about in the 15th century and was depicted as a skeleton carrying a scythe.  Some believed the Grim Reaper was simply an escort to the afterlife.  His role was not to judge, but to provide safe passage for the newly departed soul.  Others thought the Grim Reaper actively sought souls and caused death to occur. 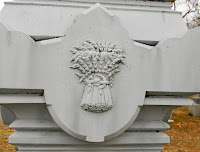 Other gravestone symbols for autumn include wheat sheaths, gathered and tied for harvesting.

Acorns and Oak leaves can symbolize strength and prosperity on a marker. 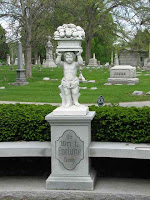 Abundant fruit as a sign of a pleasurable life, lived to the fullest.

And plowing, tilling the soil as done when planting or harvesting.

Autumn also comes a sense of balance, abundance now, leanness to come; equal hours of daylight and darkness, feelings of warmth and of chill.   Tonight, celebrate Autumn as your ancestors did - with an abundant dinner, a glass of wine, laughter, stories, and a soul-warming bonfire.

In the other gardens
And all up the vale,
From the autumn bonfires
See the smoke trail!

Pleasant summer is over
And all the summer flowers,

Sing a song of seasons!
Something bright in all!
Flowers in the summer,
Fires in the fall!
- Robert Louis Stevenson