Angels in the Cemetery


Angels are considered spiritual beings that guide and protect mankind, while interceding for him in heaven and acting as the  messengers of God.  There are nine levels of angels with 3 types in each group.  The Christian hierarchy is, from lowest to highest:  Angels, Archangels and Principalities; Powers, Virtues and Dominations; Thrones, Cherubims and Seraphims. Statues of angels, archangels and cherubims (actually Putto) flourish in cemeteries around the world, watching over the graves of children and adults, alike.
The belief in angels has existed since ancient times.  Folklore and legends from around the world have numerous stories involving angel and human interaction.  Most world religions that believe in one god share a belief in angels such as Judaism, Christianity, Islam and Zoroastrianism.  Most eastern religions do not.  The acceptance of angels’ existence peaked during the Middle Ages and continued until the mid-19th century.  Renewed interest has developed in the past 30 years.  It is interesting that both religious and non-religious people believe in angels.  According to several surveys conducted in 2009, 55% of Americans reported believing in angels.  In Canada, over 67% of those polled said they believed in angels. 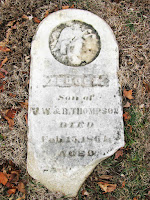 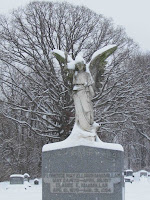 An angel pointing upward is leading the soul toward heaven and it’s reward. 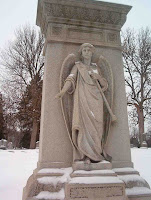 An angel with a trumpet represents the Archangel Gabriel who stands ready to issue the call to resurrection. 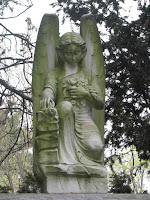 This angel holds flowers that indicate the death of a child.  The daisies specify the innocence and purity of a child; the roses are an appeal to the Virgin Mary. 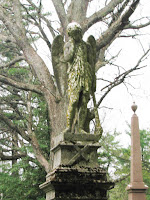 Here the angel holds an extinguished torch, to indicate death. 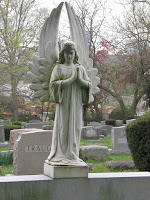 This angel stands in prayer. The star on her crown indicates the spirit rising to heaven.  The crown represents victory over death. 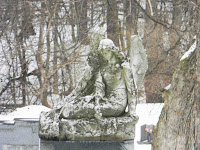 Here an angel sits on the grave, grieving an untimely death. 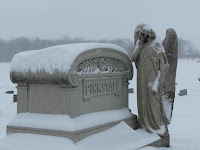 This angel holds a rolled up scroll in her hand to show that the deceased’s life has been recorded. 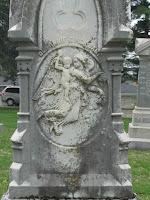 Here a guardian angel is taking the child to heaven.  The baby is holding high a lit torch to signify life everlasting.  The roses in the angel’s hands indicate unfailing love. 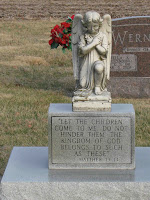 Cherubs are used to designate the grave of a child.  Cherubs have actually been humanized and blurred with Putto, which are depicted as pudgy babies or toddlers with wings in Baroque artwork.  They are found on the gravestones of children and indicate the omnipresence of God. 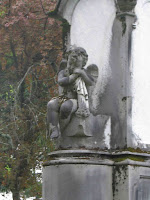 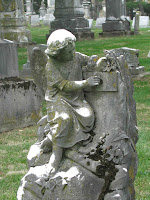 This cherub is erasing the name of the child who has passed on. 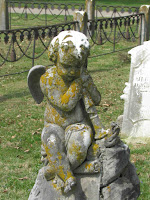 A cherub with an inverted torch indicating the death of a child. 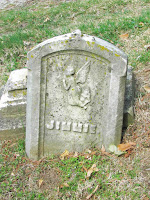 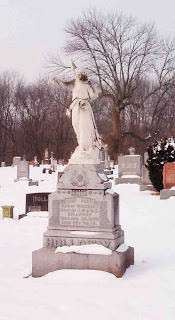 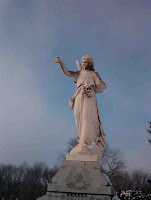 And this angel has fascinated me the most. The laurel leaves on her head indicate triumph over death.  But what is she dropping from her hand?  Flowers?  Also, here are two shots of the same statue, taken the same day.  The angle is not that different, but it appears she has raised her head.
This Friday is Arbor Day.  I’ll have an interview with an international Arborist who will discuss those odd, interesting, sometimes spooky trees found in the cemetery.
Now, all of these angels have put me in the mood to watch the movie ‘Michael” again…..(Remember, he’s an angel- not a saint ; )
~ Joy
Posted by Joy Neighbors at 7:00 AM