Today’s blog was to have been about waymarking, but life got in the way.  Or, more specifically, the death of my very faithful companion, Gretta, our Schnauzer.  We rescued her from a shelter almost five years ago when we found out that people don’t want to adopt ‘old dogs.’  She was ten at that time, somewhat fragile, a bit set in her ways, but a blusterous sweetheart.

Gretta would follow me everywhere.  If I would slip out of the room while she was sleeping, she would find me and scold me for it - loudly.  I started writing this blog in February.  There has not been a day since that Gretta was not on her pillow under my desk or under the window, acting as my ‘blogging editor in chief.’  Even if she was ill, she was always there, watching, listening, and expecting, in her Schnauzer way, for me to do my best.   Often offering up reproachful barks when I didn’t take enough time outside with her, or worked on through her quitting time. 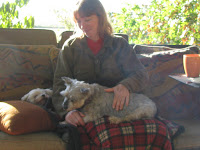 Gretta and I had a daily schedule. If my schedule had to change for some reason, Gretta would keep to our original routine.  (So very German.)  If she woke before me, she’d let me know it was time for breakfast with a sharp bark – next to the bed! When breakfast was over, Gretta would walk to the study door, turn and look at me, and then march in to her pillow where she would rule (and sleep) until lunch.  After lunch, she’d station herself under my desk, waking around 3:30 or 4 for our afternoon snack – white cheddar cheese nips, her favorite, - outside in the swing, if the weather was nice.  Then it was back to writing until 5:00 when Gretta decreed it to be the end of the workday and time for dinner.  This was done by standing by my chair and demanding I stop with a very loud BARK! However, I saw 6:00 as quitting time, so usually it was my husband, Brian, who would round her up so I could complete my thoughts.
Once her meal was finished, Gretta would lay under the dining room table while we ate, totally content, unless her arch nemesis, our big cat Harry, walked through (which he did every night, on cue.)  Then she was up, charging after him, clearing the room of cat interlopers - for the moment.

Gretta could never understand why we insisted on having cats, (sub-creatures to a Schnauzer.) That was not according to Gretta’s rules, and Gretta had a lot of rules which she would share often and freely with everyone; the cats, the outside dogs, any possum, skunk or raccoon that got too close to the fence, even Brian and I took our fair share of ‘Schnauzer scoldings.’  We often joked that Gretta had been a third grade teacher in another life, someone with a BIG attitude, who knew she was right, and who were you to question that?! 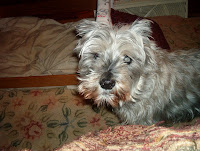 We had never had a Schnauzer before Gretta.  I am here to tell you, Schnauzers are not quiet, meek dogs!  They grump and sigh and complain when you’re not doing what they want.    To have a Schnauzer is to have a manager – per se.  A Schnauzer is an independent, courageous, intelligent,  loyal and loving friend all wrapped up in a sleek haired bundle of attitude, bark, and mischief.
Our dog groomer once told me that Schnauzers ‘talk to their owners.’  We later decided that it should be said that Schnauzers ‘scold and protest and grumble’ to their owners.   (Sometimes, I think, just to hear themselves.)  Schnauzers have enough attitude they could rule the world, if only they were organized.
We had Gretta almost five years.  During that time she regained strength in her hips and could walk and actually run-hop.  She learned how to play, and how to get us to ‘behave.’  She seemed to be aging backwards – getting stronger and healthier each year.  Then she had her first stroke early last year.  She lost the ability to walk.  Brian taught her again how to go up and down the stairs.  Before the stroke she had always remained somewhat aloof, she was now totally our dog.  She fought her way back on top, at times acting more like a young dog than one now in her teens.

Gretta just never gave up!  If there was an obstacle in her path, she’d just go around it, or bull through it.  Every night, she seemed to think this would be the night she’d catch that cat.  One thing Gretta taught me during those five short years - it’s all about attitude.  If you’re sure you can – then you can.  There’s no question about it!
Now, my study feels empty.  My very dear friend is gone.  There are no barks to urge me on, no demands that I take a few minutes to ‘pet Gretta,’ no happy hoppy runs to the kitchen for dinner, just an empty pillow and a break in my heart. 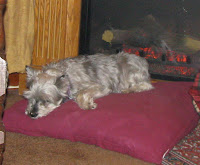 Tonight, Brian and I will light a fire and sit in the swing that was Gretta’s favorite, the one she is now buried behind.  We’ll toast to her life and remember all of those good times we had together, her playfulness, her independent spirit, and her unquestionable love and courage to the end.  We will miss you Gretta, my loyal and loving blogging buddy! 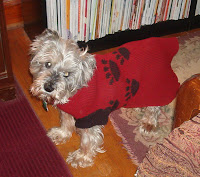