The Day the Music Died


It was fifty-three years ago today that a small-chartered plane crashed near Clear Lake, Iowa killing all four on-board.  Three of the men were the most promising stars of rock and roll, and the crash has been called the greatest tragedy rock and roll ever suffered.

February 2, 1959:
After playing all evening at the Surf Ballroom in Clear Lake, Buddy Holly, Ritchie Valens and J.P. Richardson, the Big Bopper, climbed aboard a 1947 four-seat Beechcraft Bonanza.  Holly had grown tired of their tour bus’s lack of heat, (The heating system stopped working right after they started their tour through the Midwest,) and the continual breakdowns on the road.  He and two other members paid $36 each to fly to the next tour stop Moorhead, Minnesota, 380 miles away.  It was the eleventh night of the twenty-four-city Winter Dance Party tour.  Piloting the plane was twenty-one year old Roger Peterson.

Stories have been passed down about the fateful group assembled to fly that night.  Jiles P. Richardson, better known as The Big Bopper, had come down with the flu.  The last thing he wanted was to ride in a cold bus for almost 400 miles, so he asked band member, Waylon Jennings, for his seat on the plane.  Jennings agreed and went on to ride in the frigid bus with another band member Tommy Allsup.

Tommy Allsup was also supposed to be on the plane, but had flipped a coin with Ritchie Valens for the seat – and ‘lost the toss.’

The small plane took off at 12:55 A.M. on February 3rd in a light snow with winds gusting up to 30 m.p.h.   Ten minutes later, Pilot Peterson had not attempted to call in and file a flight plan. Plane owner, Hubert Dwyer became concerned.  He requested that the tower attempt to contact the Beechcraft.  Despite repeated attempts over the next several hours, no contact was ever established.  By 3:30 A.M. the plane was reported as missing.

The wreckage was discovered the next morning in a cornfield six miles from the airport.  Authorities said the plane had banked slightly and then plowed into the ground at 170 mile per hour.  The plane flipped and skidded another 570 feet before stopping against a fence.  Only the pilot’s body was still entangled in the wreckage.  Holly and Valens were thrown from the plane and found nearby.  Richardson’s body flew across the fence and landed in an adjacent field.  The local coroner said that all four died instantly.

Investigations into the crash revealed that it had resulted from poor weather conditions and pilot error resulting in spatial disorientation.  Later investigations found that the pilot was not certified to fly in that type of weather, which would have required flying by instrument reference.

Another investigation was held into the crash in 2007, ordered by the Big Bopper’s son, Jay Richardson.  It was requested in order to dispel rumors that a gun shot on board the plane had caused the accident. Legend had it that J.P. Richardson had been alive after the crash, and attempted to crawl for help before dying in the field next to the wreckage.  Autopsy reports for Richardson verified the original findings that he too, had died on impact and had been thrown forty feet from the wreckage. 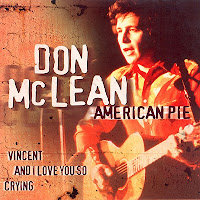 In 1971, singer/songwriter Don McLean released his American Pie album.  The song of the same name recounted his remembrances of “The Day the Music Died," February 3, 1959 when Buddy Holly, Ritchie Valens, and The Big Bopper, J. P. Richardson were killed.  When asked what the cryptic lyrics meant, McLean once replied, "You will find many interpretations of my lyrics but none of them by me.... Sorry to leave you all on your own like this but long ago I realized that songwriters should make their statements and move on, maintaining a dignified silence.”  Many have speculated that McLean was commenting on the radical changes that had occurred in society during the past ten years, the loss of innocence, from the time of Holly’s death to the late sixties.

Charles Hardin “Buddy” Holly was 22 when he died. He has been described as the single most influential creative force in early rock and roll.  Holly formed the band the Crickets in 1956. He then left the group near the end of 1958 to begin his solo career. He was best known for the 1957 hit, That’ll Be the Day, and Peggy Sue in 1958. Holly had just married Maria Eleba Santiago in late 1958.  She was pregnant at the time of the plane crash but miscarried shortly after. Buddy Holly is buried in the City of Lubbock Cemetery in Lubbock, Texas.

Richard (Ritchie) Valenzuela (Valens) was only 17 at the time of his death.  Valens was best know for his hit songs, Come On Let’s Go from 1958, and Donna and La Bamb, from 1959. He made his first appearance on American Bandstand in October 1958.  It was near the end of January 1959 when Valens joined the Winter Dance Party on tour.  Ritchie Valens is buried in San Fernando Mission Cemetery in Mission Hills, California. 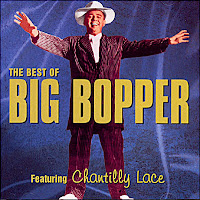 Jiles P. Richardson, the Big Bopper, was 28 years old when he was killed, Richardson was a Texas D.J., and singer/songwriter who became famous in 1958 with the song, Chantilly Lace.  He had written numerous songs during his short career, including a number one song for George Jones called White Lightning, and the number one hit Running Bear for Johnny Preston.  Richardson was survived by his wife, Adrianne Joy Fryou, and four-year-old daughter, Debra.  His son, Jay Richardson was born two months after his death.  J.P. Richardson, the Big Bopper, is buried at Forest Lawn Memorial Park in Beaumont, Texas.

And over fifty years later, the fans still remember and mourn.  Memorials have been erected at the crash site, the location of the Surf Ballroom in Clear Lake, Iowa, and at the Riverside Ballroom in Green Bay Wisconsin, where they had played the night before, on February 1st, 1959. 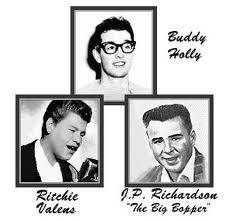 No one knows what would have happened in that up and coming era of rock and roll if any of the three musicians had survived.  But opinions still run high that Don McLean got it right – it truly was “The Day the Music Died.”