Almost a half century after his death, he is still considered one of the most respected and distinguished radio and television journalists of all time:  A journalist whose listeners and viewers trusted and believed him, A role model for future generations of journalists, A broadcasting legend - Edward R. Murrow.


On April 25, 1908 at Polecat Creek, near Greensboro, North Carolina, Egbert Roscoe Murrow was born to Roscoe C. Murrow and Ethyl Lamb Murrow.  Egbert was the youngest of three sons and raised a Quaker.  In 1914, the family moved to Blanchard, Washington striving for a better life near the lumber industry.

It was during college at Washington State when Murrow changed his first name to Edward.  He graduated in 1930, majoring in Speech.  After graduation, he moved to New York and worked as the assistant secretary for the Emergency Committee in Aid of Displaced Foreign Scholars.

During that time he met and fell in love with Janet Huntington Brewster.  On March 12, 1935, they were married.  They had one son, Charles Casey Murrow, in 1945.


In 1935 he was hired by CBS as their first Director of Talks and Education.  Two years later, in 1937, CBS sent Murrow to Europe to set up cultural programs.  Realizing that a world-wide storm was brewing, Murrow created a network of radio correspondents that could report on the upcoming rapid changes occurring.

With a keen
understanding of what would be needed, Murrow gathered some of the best writers from the wire services and newspapers stationed around the world to work for him. These included William Shirer, Howard K. Smith, Eric Sevareid, Cecil Brown, Mary Marvin Breckinridge, Richard C. Hottelet, Bill Downs, Winston Burdett, Tom Grandin, Larry LeSueur and Charles Collingwood.  These men (and Mary) became the eyes and ears of World War II, sending reports and broadcasting back home to the U.S., reporting about what was happening on the front lines of the war and its effects around the world.  This small group would later become known as “Murrow’s Boys,” friends and associates of Murrow, who also believed in and set the highest standards for reporting.

Murrow made a name for himself by his coverage leading up to and during the war.  In 1938, he reported the German occupation of Austria from Vienna as it happened.  In 1939, he made the German Blitzkrieg come alive for listeners in America.  In 1940, it was during the 10-month-long Battle of Britain that Murrow developed his calm, yet poignant style of reporting – explaining what was happening in descriptive words and phrases, while all the time immersing the audience even deeper with the actual background sounds.

During World War II, Murrow delivered over 5,000 radio broadcasts.  It was during this time that he developed his signature ominous open to each newscast – “This is London.”  And each radio show would close with his trademark wish, “Good night and good luck.”

During the war Murrow flew 25 bombing missions over Germany, recording what he saw and heard after he returned.  Americans had never been this absorbed in a war before Murrow started taking them with him every night – on to rooftops, down in bunkers, flying missions.


After the war, Murrow returned to the New York and CBS, where he was promoted to Vice President of News Programs and offered the chance to create a radio program, Hear It Now.  In 1951, he made the move to television with See It Now.  This was television’s first news program delivered in a documentary-style format.  Murrow presented it in a narrative format while taking the viewer out in the field, where the news was happening.  Most of the stories dealt with social or political issues of the time.  See It Now was the forerunner of later news programs such as 60 Minutes, 20/20 and 48 Hours.

In 1954, Murrow and See It Now took on Senator Joseph McCarthy and his communist red scare tactics. By using video clips of McCarthy speaking and appearing across the country, Murrow let McCarthy damn himself with his own words and gestures. This program broke the spell Senator McCarthy had seemingly cast over the nation concerning Communism. The Senate voted 67 to 22 to censure him eight months after the show aired.


Murrow won a Peabody award for See It Now, and public sentiment ran 15 to 1 in favor of the McCarthy broadcast.  However, William S. Paley, head of CBS took exception to the hard-hitting program, fearing a loss of revenue.  Payle cancelled See It Now soon after, although special segments of the program were broadcast until 1958.

Murrow continued to believe that radio and television could be used, not just to entertain, but also to educate and inform.  The media of the late 1950’s, as he saw it, was allowing Americans to become insulated “from the realities of the world in which we live.”

On October 15, 1958, Murrow addressed the attendees of the Radio and Television News Directors Association about his concerns, saying:
“This instrument can teach, it can illuminate; yes, and it can even inspire. But it can do so only to the extent that humans are determined to use it to those ends. Otherwise it is merely wires and lights in a box. There is a great and perhaps decisive battle to be fought against ignorance, intolerance and indifference. This weapon of television could be useful.”


Murrow’s last program at CBS was broadcast the day after Thanksgiving, 1960.  It dealt with the plight of the migrant farm workers in the U.S. and was entitled “Harvest of Shame.”
In 1961, after several run-ins with CBS Chief Executive, Bill Paley, Murrow resigned from the network where he had spent 26 years.


Murrow accepted a position with the Kennedy Administration soon after as the director of the U.S. Information Agency – the forerunner of Voice of America. He held this job for three years, until he was diagnosed with lung cancer.  He underwent surgery and had his left lung removed.  But the cancer continued to spread.

Murrow died at his farm in Pawling, New York on April 27, 1965 of lung cancer. It was reported that he smoked up to 70 cigarettes a day, about three packs. He was 57 years old.  More than 1,300 people attended his funeral.  His body was cremated and his ashes were scattered on his farm, Glen Arden, near Pawling, New York.

Murrow received numerous awards and accolades as a broadcaster.  He was awarded 9 Emmys and two special George F. Polk Awards for Journalism. He was presented with the Presidential Medal of Freedom, the highest civilian honor a President can bestow on an American citizen, by President Johnson in 1964. Murrow was indicted into the Radio Hall of Fame in 1988, and his picture appeared on a 29¢ U.S. commemorative postage stamp in January 1994. 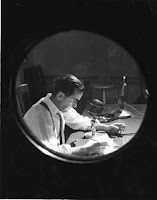 As his college, friend, and a member of the elite group known as Murrow’s Boys, Eric Sevareid said,
"He was a shooting star; and we will live in his afterglow a very long time."