There are many ways to dispose of human remains.  In the United States, we tend to prefer burial.  In England, cremation is the first choice.  In Tibet,  sky burial is favored.  But now that ‘green burials,’ (those that are more in tune with nature) are catching on again, burial at sea is becoming more popular. 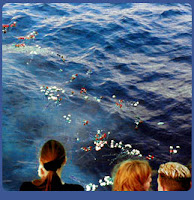 Burial at sea is accomplished by taking the deceased’s body, or their cremains, out on the ocean and dropping them over the edge of a boat into the water. Burials at sea have occurred since ancient times.

The Vikings would place a body on board a ship and set it on fire as a way to help the deceased get to Valhalla.

Throughout the islands of the South Pacific, the dead were placed in canoes and launched into the sea.

The ancient Egyptians placed their dead on papyrus rafts and floated them off to sea.

Military navies around the world have practiced sea burials for hundreds of years.  From the fifteenth century to WW II, sailors have committed their own to the sea.  Superstition had it that a sailor not buried at sea would become restless and haunt the place where he died.

If a ship capsized and life was lost, sailors would refer to those who had drowned as having been sent to Davy Jones Locker.  The origin of the saying is not known, but it was first reported in Four Years Voyages of Capt. George Roberts published in London in 1726.  During the nineteenth century, the phrase became popular among sailors.

Burial at sea is not a complicated process, but rules and regulations must be followed.  In the U.S., a body must be taken at least 3 nautical miles away from the coastline and dropped in water at least 600 feet deep.  There are some areas that require the water to be 1800 feet deep.  The remains must be prepared in a manner so that they will sink quickly and permanently.

If using a casket, it must be weighed down with one hundred pounds of weight, and have twelve 6 inch holes drilled into the lid and bottom of the casket, in order to allow the water in to aid in the sinking. Five metal bands must also be wrapped around the casket.

New England Burials at Sea, http://www.newenglandburialsatsea.com/
offers full body burials at sea.  The body is placed in a shroud that is weighted down with cannon balls.  The shroud will decompose over time and the cannon balls help to form a reef, keeping everything natural. 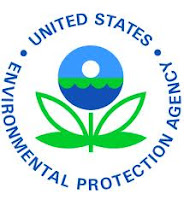 All sea burials must be reported to the EPA.  A Burial at Sea form must be completed. It will require the name of the deceased, port of departure, name of vessel, longitude and latitude of the drop, and if the remains were cremains or a body.  For more information visit http://www.epa.gov/

Almost 90% of human remains taken out to sea for burial are cremains, the remainder of the cremation process.  They may be taken out three miles from the coast and scattered on the water or dropped into the ocean in an urn. The urn may be watertight or one that will dissolve with time.

Urns may also be part of a reef that attracts sea life.  The Neptune Memorial Reef is the largest man-made reef ever built.  It is located just over 3 miles east of Key Biscayne, Miami, Florida and attracts sea life and scuba divers.

Religious beliefs can influence whether someone may be buried at sea.  Traditional Orthodox Judaism prohibits burial at sea.  Reform Judaism may allow a burial at sea after consultation with a Rabbi, but burial is still preferred.

The Roman Catholic Church will approve burial at sea in a casket or urn when the deceased has died at sea.

Buddhism specifies that the body should be cremated, placed in an urn and buried or put in a columbarium.  However, a ceremony has been developed for Buddhist military personnel who must be buried at sea.

Hinduism requires the deceased to be cremated and the ashes placed in the Ganges River.  But burial at sea can be approved after discussion with a Hindu priest. 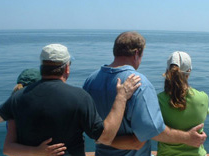 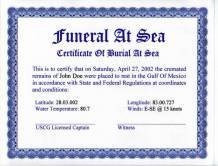 The cost of a burial at sea is quite inexpensive when compared to a traditional burial in the United States.  Depending on the company, some vessels will charge a nominal fee ($50 to $100) to carry ashes out to sea and scatter them.  Others will take the family out to sea where a service can be held and the remains dropped over the edge of the ship or boat.  Prices vary, but the smaller the boat, the less the expense.

Many well-known people have been buried at sea including;

Those who request burial at sea usually have a deep affinity for the ocean, whether from working on it, being near it, or just loving to look at it.  Many people find a sea burial to be a serene and unobtrusive way to sail off into the sunset.

I Must Down to the Seas Again, the Lonely Sea and the Sky

I must down to the seas again, to the lonely sea and the sky,
And all I ask is a tall ship and a star to steer her by,
And the wheel's kick and the wind's song and the white sail's shaking,

And a grey mist on the sea's face, and a grey dawn breaking.
I must down to the seas again, for the call of the running tide
Is a wild call and a clear call that may not be denied;

And all I ask is a windy day with the white clouds flying,
And the flung spray and the blown spume, and the sea-gulls crying.
I must down to the seas again, to the vagrant gypsy life,

To the gull's way and the whale's way where the wind's like a whetted knife;

And all I ask is a merry yarn from a laughing fellow-rover
And quiet sleep and a sweet dream when the long trick's over.
~ John Masefield, Poet Laureate (1878 - 1967)