May is National Pet Month and pets have always been a part of the family in many parts of our culture.  In fact, ceremonial burial of pets has been practiced in every part of the world at some point in time throughout history

Today we consider burial options for them just as we do for humans.  And nowadays there are many options to consider – from the traditional pet burial at home, to cremation, to green burial, to pet cemeteries.


In Ancient Egypt, pets were mummified, just like people.  Sections of land along the Nile were designated for the burial of animals.  It was also acceptable for pets to be interred in the tomb of their owners.  In 1888, an Egyptian farmer discovered a tomb outside of Beni Hasan that held over 80 thousand mummified cat remains, dating from 1000-2000 BCE.


Ashkelon National Park in Ashkelon, Israel is home to the largest dog cemetery from ancient times.  Over 700 dog remains have been discovered so far, dating back to the fifth century B.C.  Much more excavation needs to be done before the final number of canine remains will be known.  Researchers say it is the largest known animal cemetery in the ancient world.  Careful attention was paid to the treatment of these animals after death, giving them a proper and respectful burial.

The Cimetière des Chiens et Autres Animaux Domestiques is located in the northwest Paris suburb of Asnières-sur-Seine, Île-de-France. Established in 1899, the name literally means “Cemetery of Dogs and Other Domestic Animals” and it is the burial ground for cats, horses, fish, moneys, even lions – all pets. The French government declared the cemetery a historical monument in 1987, but due to a lack of interest and tourism, it may have to close.


In the United States, Hartsdale Pet Cemetery in Greenburgh, New York is the largest and oldest pet cemetery in the country, possibly the oldest in the world.  Started by Dr. Samuel Johnson, Professor of Veterinary Surgery at New York University in 1896, it was never really his intention to open an animal cemetery. When a client approached him and asked for his assistance in finding a suitable location to bury her beloved pet, one that was not illegal and would not be destroyed, Johnson suggested the apple orchard on his country property in Westchester County.

(Johnson was also active in founding the American Society for the Prevention of Cruelty to Animals (ASPCA).

Johnson told this narrative to a reporter who then printed a story about it.  Soon Dr. Johnson was inundated with requests from other pet owners.  He originally set aside three acres to be used for a pet cemetery. Then in 1914, the Hartsdale Canine Cemetery came into being. It is now the final resting place of over 75,000 pets, including many canines that served in the U.S. military.

The Hartsdale Pet Cemetery also holds the cremated remains of over 600 people who did not want to be separated from their faithful friends. Although the state of New York ruled in June 2011, that placing human remains in a pet cemetery was illegal, a tremendous outcry from pet owners caused them to re-evaluate the law and reverse it in December 2011. 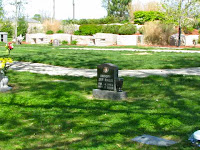 There are now over 400 pet cemeteries in the United States.  This option is now available throughout the country.  Using a pet cemetery is a decision pet owners may make so that they can know that their pet is being treated with dignity and respect.  It is also an option for those without a private yard for burial, or for those who seek a quiet and undisturbed location for the final resting place of a dear friend.  And as an added note, about 25% of pet cemeteries in America will accept the cremains of humans in their cemeteries. 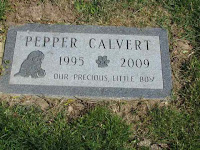 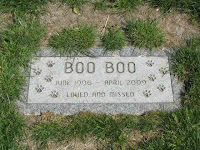 Traditional burial is still the most practiced of burial options, but green burials, inurnment, and cremation are catching on.  And there are other options –

Many companies began offering headstones and grave markers for pets in the 1940’s.  Pets can now be memorialized in many different ways; with simple headstones, grave markers that include photos or etchings, personalized epitaphs, even elaborate statues.  And the use of pet headstones is not limited to pet cemeteries.  Reports indicate that many people order stones to put in their yards or gardens where their pet is buried. 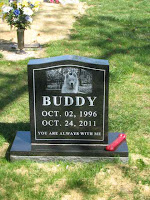 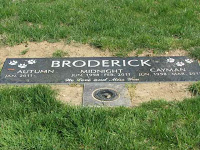 Burial is a way of honoring an animal, of expressing love and respect for a faithful friend, and of the belief that we will continue to share our journey, even in the after life, with our pets.  It shows a compassionate and caring attitude for our non-human companions in a world that is becoming increasingly impersonal.

This newer version of the poem, The Rainbow Bridge, seems to sum up our hopes and wishes for a continued journey with our furry family members.

The Rainbow Bridge (inspired by a Norse legend)

By the edge of a woods, at the foot of a hill,
Is a lush, green meadow where time stands still.
Where the friends of man and woman do run,
When their time on earth is over and done.
For here, between this world and the next,
Is a place where each beloved creature finds rest.
On this golden land, they wait and they play,
Till the Rainbow Bridge they cross over one day.
No more do they suffer, in pain or in sadness,

For here they are whole, their lives filled with gladness.
Their limbs are restored, their health renewed,
Their bodies have healed, with strength imbued.
They romp through the grass, without even a care,
Until one day they start, and sniff at the air.
All ears prick forward, eyes dart front and back,
Then all of a sudden, one breaks from the pack.
For just at that instant, their eyes have met; 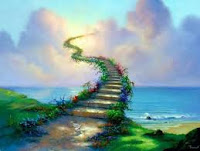 Together again, both person and pet.
So they run to each other, these friends from long past,
The time of their parting is over at last.
The sadness they felt while they were apart,
Has turned into joy once more in each heart.
They embrace with a love that will last forever,
And then, side-by-side, they cross over… together.

For information on pet cemeteries or for assistance with pet bereavement contact the International Association of Pet Cemeteries & Crematories (IAOPPC) http://www.iaopc.com/.