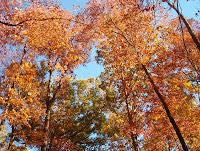 Once again, the month of October is upon us…. a time for hauntings, Halloween - and all things spooky.  This month, A Grave Interest will take a look at several haunted cemeteries.  Get ready as we explore some ‘lively’ places, and the people who make them so……. 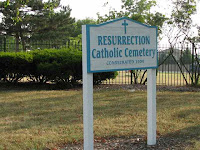 Resurrection Cemetery, on the outskirts of Chicago, is a comfortable cemetery – during the day.  But at night it’s rumored that a young girl still roams the area in search of dancing partners and the life she once lived… 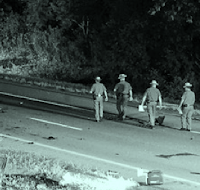 Resurrection Mary is one of the most popular ghosts in the U.S.  The story is based on a legend about a local girl who had gone dancing with her boyfriend at the Oh Henry Ballroom during early 1930’s.  During the evening the couple had an argument and Mary decided to walk home; she was struck and killed by a vehicle while walking on Archer Avenue.  The driver fled the scene and was never found.  Mary was buried in Resurrection Cemetery, near the ballroom.

Sightings of Mary began in the late 1930’s and continue to this day.  The first reported occurrence happened in 1939 to Jerry Palus.  Palus claimed that he met the blond haired, blue-eyed girl at the Liberty Grove and Hall.  They danced throughout the evening and he offered to give her a ride home.  After giving him her address, she remained quiet.  During the ride home, Mary disappeared from the car in front of the cemetery. Palus said he went to the address Mary had given him and spoke with her parents who told him that Mary had been dead for several years. And so the legend began… 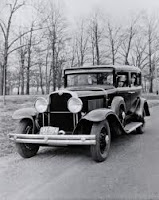 Over two dozen people have reported picking Mary up as she walked along Archer Avenue on dark, cold nights.  Most drivers report that she is dressed as if she has come from an evening of dancing, in a white dress from years ago.   Mary usually disappears from the car as it passes the cemetery, or asks to be let out at the front of the gates where she disappears inside.

So who was Resurrection Mary?  It’s not really known.  Conjecture is that she may be Mary (Marie) Bregovy who died in an auto accident on Wacker Drive in 1934.  Other reports claim she is Anna Norkus who died in a car accident while returning home from the Oh Henry Ballroom in 1927. Or, Mary may be nothing more than an urban legend, a romantic story about the Windy City’s most famous vanishing hitchhiker ghost.  But over two dozen eyewitnesses have described the same girl, doing the same thing, decade after decade…

In 1976, police responded to a call about a young woman being locked in the cemetery.  When they arrived, no one was found inside, but an officer did discover that the bars to the front gate had been bent, with handprints burned into the metal.  Cemetery officials said the gate was damaged by a truck and had it replaced to stop curiosity seekers from coming out at night.

Several songs have been written about Resurrection Mary, including Laurie (Strange Things Happen) by Dickie Lee in 1965, Resurrection Mary by Ian Hunter in 1996, and I Guess It Doesn’t Matter Anymore by Blackmore’s Night in 2006.

If you’re looking for information about the cemetery, I suggest you visit their website @ http://www.catholiccemeterieschicago.org/locations.php?id=15

The woman I spoke with at the main desk was not helpful.  When I asked for a map and information on cemetery and its most famous interments, (I made no mention of Resurrection Mary,) she would give me neither.  Luckily, I had already researched the cemetery and knew what gems were there – hundreds of gorgeous statues, an outdoor garden crypt with 5,000 vaults, and the Resurrection Mausoleum, an architectural marvel with stained glass window walls.

Resurrection Cemetery began in 1904 as a Polish Catholic Cemetery.  Today, it serves all members of the Catholic faith with over 150,000 interments.  The cemetery is located at 7201 Archer Avenue in Justice, Illinois. It is open Monday – Friday from 8:30 A.M. to 4 P.M. and Saturdays from 9 A.M. to 1 P.M. 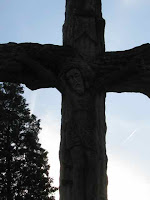 Regardless of who she was, the legend of Resurrection Mary continues to haunt Archer Avenue and Resurrection Cemetery.  It just goes to show; you never know whom you’ll pick up along a deserted stretch of roadway on a cold, dark night….