Today marks the 71st anniversary of the surprise aerial attack on the U.S. naval base at Pearl Harbor.  On a quiet, sunny Sunday morning, just before 8 A.M., the Japanese launched over 350 fighter, bomber and torpedo planes, along with several submarines, in an attack against the base in Hawaii.


Eight battleships, the entire U.S. Pacific fleet, except for the Colorado, were at Pearl Harbor that morning. Seven of the ships were lined up in ‘Battleship Row,’ presenting easy targets from the air.  Of the eight ships sank or damaged during the attack, all but two, the Arizona and the Oklahoma, were eventually returned to active duty.

The U.S.S. Arizona was struck several times by bombs, and exploded when a bomb hit her forward ammunition room.  Approximately 1,170 of her crew died on board.  The Arizona became the war memorial to Pearl Harbor.


The U.S.S. Oklahoma was struck by nine torpedoes before listing on her side and turning upside down.  Most of her crew was trapped on board.  Only 32 crewmen were saved.

The Japanese launched two destructive waves against the island that morning, one at 7:55 and the other at 8:40.  The cry of “Tora, Tora, Tora” was a signal to the Japanese Navy that the Americans had, indeed, been caught unawares.


But during that short two hour period, 21 ships were severely damaged or sunk.  This included eight battleships, four destroyers, three light cruisers, one minelayer, one target ship, and four auxiliaries.

The Japanese also destroyed 188 U.S. planes and damaged over 150 more on the airfields at Hickam, Wheeler, Bellows, Schoefield, Barracks, Ewa, and Kaneohe Naval Air Station.  The planes had been lined up on the airfields wingtip to wingtip in order to thwart sabotage attempts. They were easy targets for the Japanese strafing and bombing runs.


Although profoundly shaken and stunned, the Pacific fleet still maintained its aircraft carriers, submarines, and fuel supplies. None of those had been damaged.  This would be the foundation on which the U.S. would build it's destruction of the Japanese forces four years later.

The total number of U.S. servicemen killed on December 7th was over 2,400.  The U.S. military reported 1,143 personnel were wounded during the attack. Sixty-eight civilians were killed, and more than 30 were injured.

Of those who died that day, it was reported that two-thirds died within the first 15 minutes when the Arizona, Oklahoma and Utah were bombed. Nearly half of the lives lost were on board the Arizona.


U.S. personnel rallied quickly under attack, using anti-aircraft fire to defend the island of Oahu, Hawaii.  The Japanese lost 29 planes, a large submarine, and five midget subs in the encounter.

The total number of Japanese personnel lost was 65 servicemen, killed or wounded. One Japanese sailor was captured.

On December 8, 1941, President Franklin Delano Roosevelt took to the airwaves, attempting to explain what had happened in Hawaii. Roosevelt began his address with these famous words,

“Yesterday, December 7th, 1941 -- a date which will live in infamy -- the United States of America was suddenly and deliberately attacked by naval and air forces of the Empire of Japan.”

During that short six-minute radio address, the President appealed to outraged Americans to support him in the abandonment of the U.S. policy of isolationism.  The President then asked Congress to declare war on Japan.

That same day, Congress voted that a state of war existed between the United States and Japan, and gave the President the power necessary to wage war with all of the resources of the country.  Three days later, Germany and Italy joined Japan in declaring war on the United States and the U.S. responded in turn.  The attack on Pearl Harbor was the defining incident that brought the U.S. into the Second World War, more than two years after the conflict had begun. 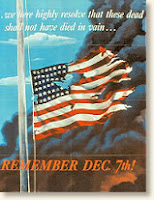 The nation entered the war with the rallying cry, “Remember Pearl Harbor!” 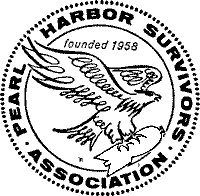 In December 1954, the Pearl Harbor Survivors Association held its first meeting to commemorate and remember their fallen comrades.  The first organized meeting was held in California where over 1,000 Pearl Harbor survivors attended the event.  Last year, on December 31, 2011, the association terminated its existence, citing the reasons as the age and health of its remaining members.

Today, the island of Oahu is home to the U.S.S. Arizona Memorial.   It was during 1950 that the Arizona’s midships structure, which remained above the water level, was used as a location for memorial services.   In May of 1962, the memorial was dedicated as an open-air shrine. The names of the dead are carved in marble on the memorial’s walls.

Wreaths and leis are tossed onto the water as tributes to those who died.  And still, after 70 years, an iridescent slick of oil continues to leak from the Arizona’s ruptured bunkers, at the bottom of the sea. It is sobering when you realize that the memorial is situated over the gravesite where 1,177 men lost their lives that December morning.
More than 1.5 million people visit this memorial each year.

The World War II Valor in the Pacific National Monument opened in 2008, and the Pearl Harbor Visitors Center was opened in 2010.  Both sites assist in enhancing the experiences of this historical area – and in explaining why this became “A date which will live in infamy!”