125 Years Later - A Look Back at The Ripper’s Second Victim, Annie Chapman

She was known as “Dark Annie” because of her dark brown hair, but Annie Chapman was just another of Whitechapel’s “fallen women,” until the autumn of 1888 when that could end up costing you your life.

Annie Chapman was born in Paddington, England in September 1841 to George Smith and Ruth Chapman. (Her parents married six months later.)  Annie married a relative of her mother’s, John Chapman, on May 1st, 1869 in Knightsbridge.

John worked as a domestic coachman in order to support Annie and their two girls. By 1881, he was working as a farm bailiff, a type of supervisor who oversaw several tenant farms, collecting rents and making sure the farms were taken care of for the actual landowner. It was during this time that the Chapman’s had their only son, who was a cripple.

By 1885 Annie had tired of married life and took to the streets in London, selling crochet work, matches, and flowers. John Chapman provided Annie with a small allowance to help her get by, but she began making up the difference with casual prostitution.

Annie moved in with Jack Sivvey, a sieve maker, in 1886 and called herself Mrs. Sivvey. The arrangement was short-lived and Annie was soon on her own again, this time without the assistance of her husband John, who had died on Christmas Day 1886.

Over the next couple of years, Annie lived in several lodging and workhouses, eventuallybecoming a regular at the Crossingham’s Lodging House.

It was on Saturday, September 1, 1888 that Annie fought with another lodger, Eliza Cooper over a bar of soap. It appeared that Annie got the raw end of the deal and was sporting bruises and complaining of feeling ill on Monday the 3rd.  On September 4th her friend, Amelia Palmer noticed that Annie had not been drinking because of her pain. Palmer told Annie to go to the casual ward and get treated for her injuries.

Annie was back at Crossingham’s Lodging House on Friday, September 5th and spent the afternoon sitting in the kitchen because she felt unwell. She left later in the day and met with her sister who gave her some money. Annie then ran into Amelia Palmer, and again complained of feeling ill.

way to spend her money on beer. She then returned to sit in the lodging house kitchen to eat a late supper. Around 2 a.m.  John Evans, the lodging house night watchman turned her out for not having money enough for a bed.

Dark Annie said that she would earn her bed money and return soon, but many thought she was deep in her cups when she headed towards Spitalfields. 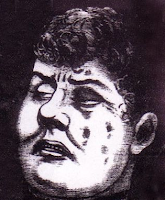 The next four hours of Annie’s life remain a mystery, but at 5:50 a.m. her body was discovered in the fenced backyard at 29 Hanbury Street. Unfortunately, sometime during the night Annie had made the acquaintance of Jack the Ripper.


Annie’s body was discovered a little before 6 a.m. by John Davis, a carman who lived at Number 29. The body was lying parallel with the fence, the head turned toward the house and the clothing pulled up around her waist. The abdomen had been ripped open and the throat cut so severely the head was nearly decapitated.

Davis reported the murder to the Commercial Street Police Station. Inspector Joseph Chandler was quickly on site clearing the Hanbury Street yard of spectators and sightseers.

Dr. George Philips, the divisional police surgeon arrived by 6:30 a.m. According to Phillips testimony at the inquest, "The left arm was placed across the left breast. The legs were drawn up, the feet resting on the ground, and the knees turned outwards. The face was swollen and turned on the right side. The tongue protruded between the front teeth, but not beyond the lips...

“The throat was dissevered deeply; that the incisions through the skin were jagged and reached right round the neck...On the wooden paling between the yard in question and the next, smears of blood, corresponding to where the head of the deceased lay, were to be seen."

Phillips ordered Chapman’s body to be taken to the Whitechapel Workhouse Infirmary for a post mortem examination. Workers at the morgue were told not to touch the body, but preceded to strip and wash it (just as they had Mary Ann Nichols) before a thorough examination could be performed.

On September 10th an inquest into the death of Annie Chapman was held at the WorkingLad’s Institute in Whitechapel.  Coroner Wynne E. Baxter conducted the inquest, just as he had for Polly Nichols (the first confirmed Ripper victim) ten days before. 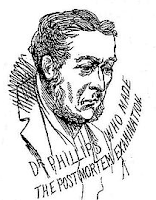 Dr. Phillips reported during the inquest that Chapman was in poor health due an advanced case of tuberculosis, but he concluded that she had been sober for several hours before her death. Her swollen face and protruding tongue indicted strangulation, and he believed that she had died some time before 4:30 a.m.

Phillips told the inquest that the abdomen had been cut open and the intestines severed from the body and placed above the shoulder. The uterus and the upper portion of the vagina had been completely removed.

When asked about the surgical skill of the murderer Phillips said, “'the work was that of anexpert- or one, at least, who had such knowledge of anatomical or pathological examinations as to be enabled to secure the pelvic organs with one sweep of the knife'. 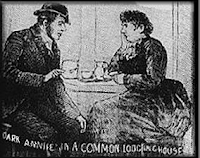 Conflicting reports and testimonies were given by several witnesses as to the type of man Annie was seen with, what was reportedly said, and what time she was last seen alive. In the end, a verdict of willful murder against a person or persons unknown was entered.

The Ripper had claimed his second victim.

Annie Chapman was buried on Friday, September 14th at Manor Park Cemetery. Annie’s family met the hearse at the cemetery, thereby keeping the funeral secret until after her burial. Her name, date of death and age were inscribed upon her elm coffin. 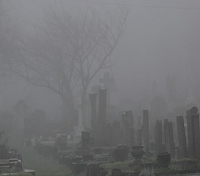 Annie Chapman’s grave no longer exists. It has since been reused and buried over.