I decided early on that it would be smart to get some guides for these haunted jaunts. And who better to seek out than the local experts on all things paranormal in their town.

On this cloudy night I met with Garett Merk and Matt Hopkins for a private preseason tour. Both men are ghost hunters by trade and more skeptical of sightings and stories than you would expect. Garett is an author of several haunted books and the founder of the Tri-State Paranormal and Oddities Observation Practitioners. Matt is the lead investigator for Cincinnati Area Paranormal Existence Research.

The stories told on the 90-minute tour have come from first-hand accounts. History is a passion for this group and it shows. They research the stories and information they are told using newspapers, the local historical society, and by holding their own investigations.

Miamitown is a river town with a rich history. Located on the banks of the Great Miami River, just southwest of Cincinnati, the land was once sacred Shawnee hunting grounds. Then settlers began arriving in the early 1800’s, pushing the Indians westward. Miamitown was incorporated in 1834.


Our tour began at what was once the first church in town, the Miamitown Methodist Church. Founded in 1834, this was the only church in the village for years and it became the heart of the community.

Tragedy struck on New Year’s Eve morning 1939. On this Sunday fire swept through the church. The children's Sunday school class in the basement did not escape.

Over the years the church has housed an antique store, and is currently home to an art studio. Several specters have been seen wandering the aisles of the antique store, but one seems very poignant. The owner reported it was usually little things like the bell above the entry door ringing, but no one had entered or left. Or items moving around from one place to another. Then one day, while in the basement, she was approached by a little girl dressed in white. When the owner asked if she needed help, the child replied that she was looking for her mother. The owner went upstairs to find the parent but instead discovered that there was no one in the store. When she returned to the basement, the little girl was gone. (But she has been seen from time to time darting among the tombstones late at night.)

The antique shops in the town are favorite haunts for the spirits of Miamitown. Several others have interesting stories connected to them.

It’s no surprise that the Village Pump Antiques has had a resident ghost – it is located on what was once cemetery ground. The walkway up to the front porch is paved with old tombstones. In fact, most of the town is located on ground that at one time or another was used to bury their dead.

When the building was a private home three sisters lived there. But then one married and moved out and another moved away leaving the third sister, Margaret, content to remain in her family home with her cats.

Her home was sold after she died and odd occurrences began happening when the home became a store. A psychic told the owner that there was an older woman upstairs who used to live there. She was very friendly and would appreciate it if people would just say “Hi” to her. Soon everyone greeted Margaret when they entered the store. The psychic checked back about a year later, but Margaret had gone, apparently satisfied that her home was being visited by very friendly people.

There is also a haunted glass shop where ghostly children laugh and play. During the Civil War it was home to a family with eight children. Three of them died there – and apparently never left.


And speaking of children, the local elementary school is said to be haunted by an early settler who has taken up residence in a utility closet. But again, it’s no wonder that spirits roam the hallways. When the town officials were preparing to build the school in the 1950’s they decided that the best location for it was the land that was Cemetery #2.

Graves were dug up and the remains and stones moved across the highway to the current cemetery. But as workers began digging deeper they discovered another layer of bodies. These too were moved across the street and reburied near the front of the cemetery. But workers again discovered a third level of graves, probably remains from the cemetery site where the Village Pump Antiques is now located. These were also taken across the road and reburied in the cemetery, where, hopefully they will finally get to rest in peace.

But some spirits continue to seek that chance to cross over. The Harrison Street Bridge has a sordid past. This bridge is the fourth structure to cross the Great Miami River here. The first was burned down in 1863 in order to stop Morgan’s Raiders from crossing it. A steel bridge was put up in 1894 and remained for many years, but several fatalities occurred on it. Then in 1989, a temporary bridge was built so that a new one could be constructed across the river.

It was a May day in 1989 when heavy flooding caused the river to swell and the foundation for the temporary bridge began to give way. The bridge was quickly closed, but unfortunately one car did not make it across to the other side before the bridge fell into the raging river. The two women in the car were killed. But those who witnessed the collapse said that there was also a pickup truck crossing behind the car, and it too had fallen into the churning waters.

Although officials searched for months, no truck was ever found, nor were any other bodies. What did those on the riverbank see that day, following the car? No one knows for sure but a white appreciation has been seen starting across the bridge just as the car did, hurrying to get across, but it always vanishes before ever reaching the safety of the other side. 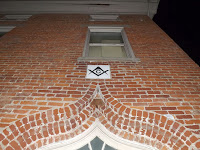 And there are so many more eerie stories that revolve around this quaint little town. The ghost walking tours lasts about 90 minutes and covers around ½ mile with 13 stops. Tours are suitable for adults and older children. Call (513) 846-0018 or visit their web page at http://www.miamitownghosttours.com, or their Facebook page https://www.facebook.com/miamitownghosttours
for more information. Tours are available throughout the year. 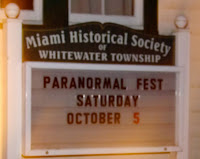 And, this Saturday, October 5th will be the annual Miamitown ParaFest http://miamitownparafest.com from 11 a.m. to 7 p.m. This free event is family-friendly and includes well-known ghost hunters, paranormal authors, UFO researchers, psychics, and more. Over a dozen paranormal groups will be on hand to tell stories, answer questions and show off their ghost hunting gear. There’s also a Zombie Walk, horse drawn ghost tours, a ghost hunt for the kids, and you can register to win an opportunity to go on a ghost hunt at a Miamitown haunted site with the Tri-State Paranormal and Oddities Observation Practitioners.

And, did I mention, this event is FREE?! 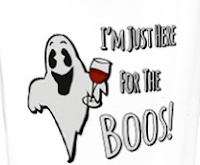 Next Wednesday I’ll have more on a haunted lounge that serves spirits with their spirits on Joy’s JOY of Wine @ http://joysjoyofwine.blogspot.com

And next Friday, a noted ghost author will take us on a spooky trip through another river town, searching for a missing grave yard, and a lost coven. This is a town which has more than its share of ghosts and spirits…

* Had to share the very odd photo I took during this tour. This was in the cemetery - Any ideas?
Posted by Joy Neighbors at 5:00 AM