This week marks the 100th anniversary of the start of World War One. Here are 100 facts about that fateful war, 100 years after its beginning.

Ramp Up To War
1) The final trigger for the war came on June 28th when Archduke Franz Ferdinand, heir to the throne of the Austro-Hungarian Empire, and his wife Sophie were gunned down

2) “The Black Hand,” a Serbian terrorist group, planned the murders

4) The war had actually been a long time in coming; spanning four decades of diplomatic conflicts between Italy, France, Britain, Germany, Austria-Hungary and Russia concerning political issues, the economy, and unresolved territorial disputes involving the Balkans


5) World War One was known as “The Great War”; The War to End All Wars; The War of the Nations, and is abbreviated as WWI

7) The Central Powers were made up of Germany, Austria-Hungary, Turkey, and Bulgaria

9) This was the first global conflict

13) It was the sixth deadliest conflict in world history

14) Soldiers came from over 40 countries and numerous colonies

15) Russia marshaled 12 million fighting troops: this was the largest army in the war

19) Another 21 million were wounded

24) Thirty-eight American volunteers fought in the French Air Service years before the U.S. entered the war

25) Their unit was known as the Lafayette Escadrille: One of the best fighting units on the Western Front

36) In the Battle of Jutland, over 250 ships took part in the fight

39) The Central Powers sank over 5,500 Allied and neutral ships

40) Most were sunk in the English Channel

45) The Lusitania went down within 18 minutes 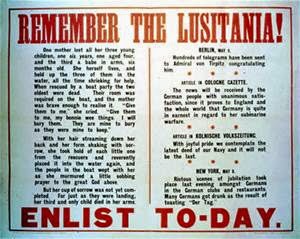 Ground Forces
49) 1.2 million soldiers died during the Battle of the Somme

50) 58,000 British soldiers died during the first day of the Somme Battle

51) The most decorated American solider of the war was Alvin York who received a medal of honor for leading an attack on a German gun nest; killing 28 German soldiers and capturing another 32

52) The Western Front was made up of 466 miles, which stretched from the English Channel to Switzerland

54) For every 4 inches of trench dug, there was one soldier to defend it

56) Trench foot was a major problem during the war

57) The British army had over 20,000 cases reported during the first year

58) The trenches were crawling with rats and lice

59) In 1916, the Battle of Verdun resulted in over one million causalities – all within a 10-month time frame

62) Tanks were first used in WWI

67) Artillery weapons were responsible for 70% of all battlefield deaths

68) Artillery barrages could be heard for hundreds of miles

75) The following year, Germany was the first country to use poisonous chlorine gas against the enemy

76) Over 30 different poisonous gases were used during the war

77) Over 1-million soldiers were gassed during the fighting

79) At the end of the conflict, most countries signed treaties, which outlawed the use of chemical weapons

81) After the war over 80,000 British soldiers were diagnosed as suffering from shell shock

82) By the end of the war over 250,000 British soldiers had undergone at least one amputation

Disease
83) The Spanish Influenza epidemic spread far and wide due in part, to WWI

86) When the flu outbreak ended, at least a third of the soldiers had died from it

Other Causalities
87) Civilian deaths were over 6.6 million during the war

90) During the four years of the war, 11% of France’s residents were either killed or wounded

91) A British nurse, Edith Cavell assisted 200 Allied soldiers in escaping from Belgium during the war

92) The Germans had her executed by a firing squad

94) Over 1 million dogs died on WWI battlefields while scouting, acting as sentries or carrying messages

96) The most decorated military dog during the war was Sergeant Stubby, a bull terrier mix

100) After the war, a total of four empires collapsed: Germany, Ottoman, Austro-Hungary, and Russia