Most of us have heard the story of Daniel Boone, the pioneer and frontiersman who helped blaze a trail into America’s early frontier. Or maybe we remember the TV show “Daniel Boone,” which ran from 1964 to 1970 – not exactly a lesson in history, but it did have a catchy intro song …

Daniel Boone was born on November 2, 1734 the sixth of eleven children that Squire and Sarah (Morgan) Boone would have. The Boones were Quakers and lived in the Oley Valley, near what is now Reading, Pennsylvania. Daniel grew up learning to hunt with the Lenape Indians who lived nearby.

Boone had very little formal education but could read and write, and enjoyed reading Gulliver’s Travels to his hunting buddies around a campfire. 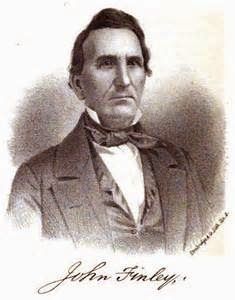 Daniel volunteered for the French and Indian War in 1755 and served under Captain Hugh Waddell as a wagoner in North Carolina. While serving, Boone met John Findley who told him stories about the abundance of game and beautiful settings of the Ohio Valley. Boone’s interest was peaked but it took 12 years before he would make that hunting trip into Kentucky.

In August 1756, Boone married Rebecca Bryan and settled down in North Carolina saying he now had all he needed, "a good gun, a good horse, and a good wife."  Over the years, they had a total of ten children. Boone supported his large family by hunting and trapping, leaving every autumn on long hunts that could last for months.

Daniel again served in the military during the “Cherokee Uprising” in 1758, moving his family to safety in Virginia until the conflict was over. In 1767, Boone reached Kentucky with his brother, Squire. While there he ran into his old friend, John Findley who convinced him to take a long hunting expedition through Kentucky.

Boone left in 1769 to clear a trail through the Cumberland Gap; he was gone for two years. When he returned, he packed up his family and moved with another 20 or so families along the Wilderness Road and into Kentucky. Boone led the pioneers to a spot along the Kentucky River and named it Boonesborough.

With the outbreak of the American Revolutionary War, the Indians saw a chance to drive the colonists out of Kentucky. By 1776 less than 200 people remained in the area. Those that did were staying in the fortified settlements of Boonesborough, Harrodsburg, and Logan’s Station.

Then on July 14, 1776 Boone’s daughter, Jemima and two other local girls were captured by a Cherokee and Shawnee war party. Boone and a group of local men were able to get the girls back two days after the ambush. (A fictionalized version of the story was written and entitled Last of the Mohicans in 1826.)

Two years later, Boone was captured by the Shawnee Indians. He eventually escaped and returned to Boonesborough to help defend it against Indiana raiders. He then left to purchase land for the settlers but was robbed of the monies. He was forced to repay all of the settlers and was never able to escape from the lawsuits and debt.

Boone was elected to several government offices including sheriff, lieutenant colonel, and as a legislative delegate. But Kentucky had lost its appeal and Boone moved his family to Upper Louisiana; what is now Missouri, in 1799.
Spain owned this part of the country and Boone was treated well by the Spanish government, receiving a large land grant and a leadership title. Boone was happy with his life until the U.S. took over the land and denied his claim to the land. It wasn’t until 1814 that Congress restored a part of his landholdings to him.

Rebecca Boone died in 1813 and Boone moved near St Charles, Missouri to live with his son, Nathan.  Daniel Boone died in Defiance on September 26, 1820. He was 85 years old. 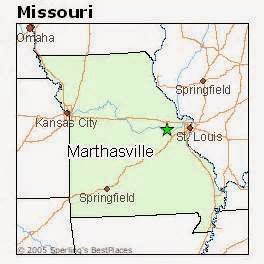 Daniel Boone was buried next to his wife in an unmarked grave in Marthasville, Missouri. The graves were marked with stones sometime in the mid-1830s. But in 1845, Boone’s remains, along with Rebecca’s, were disinterred and moved to the new cemetery in Frankfort, Kentucky, the state’s capital. But were they? Controversy has existed over this for almost 170 years.

The folks in Missouri claimed that Daniel Boone’s grave stone was actually placed over the wrong grave but no one had done any thing about it. When the Kentuckians arrived, they took the wrong remains back with them.


In 1983, a forensic anthropologist examined the plaster cast that had been made of Boone’s skull before the remains were buried in Frankfort. The verdict was that the skull belonged to an African American. Officials in Frankfort quickly disputed the findings. 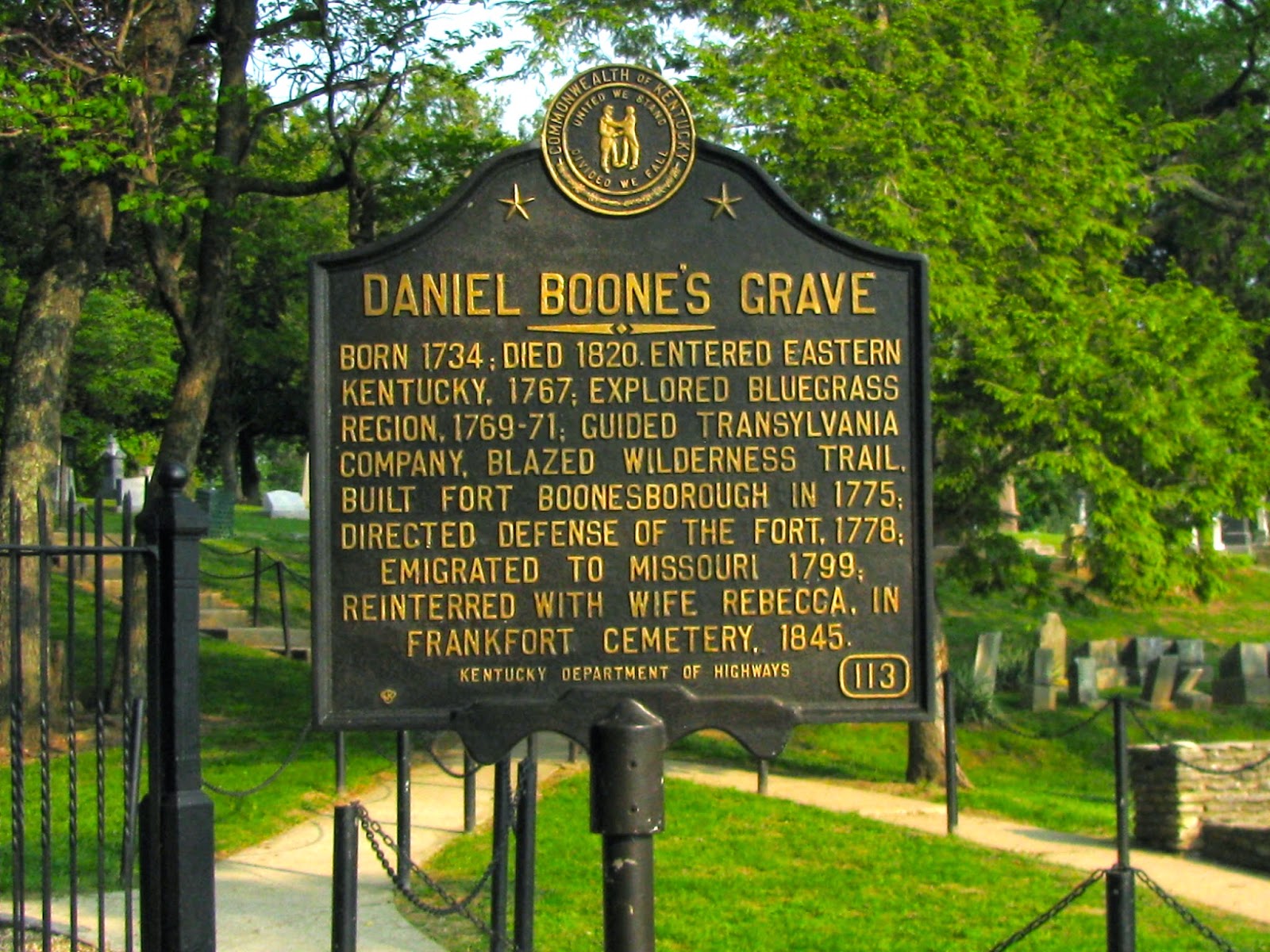 Today, both Frankfort Cemetery in Kentucky and the Old Bryan Farm Graveyard in Missouri claim to have Daniel Boone’s remains, a conundrum that might have tickled his fancy …

The Restoration of Hickory Hill (The Old Slave HOuse) Cemetery

On a recent, hot July afternoon, a group made up of nine volunteers began work on restoring two of the most controversial cemeteries in Illinois – Hickory Hill and Lawler. The cemeteries are located side by side within sight of the old Crenshaw place, better known as the Old Slave House.

Located in Gallatin County, near Equality, Illinois, these cemeteries are the final resting places of several members of the Crenshaw and Lawler families including John Hart Crenshaw, a key figure on the reverse Underground Railroad. Lawler Cemetery was named after Crenshaw’s son-in-law, Civil War General Michael Kelly Lawler.

Old Slave House History
John Hart Crenshaw was a southern Illinois resident who became deeply involved in the slave trade during the 1820’s; he was charged several times with kidnapping during this time. Crenshaw became an actual slave trader in 1827.  The first documented case against him involved a black indentured servant named Frank Granger whom Crenshaw kidnapped and took to Kentucky in 1828.  The second kidnapping case followed on the heels of the first and involved a free black woman named Lucinda and her two children.  Crenshaw kidnapped the three and took them to Barren County, Kentucky in 1828 to be sold into slavery. 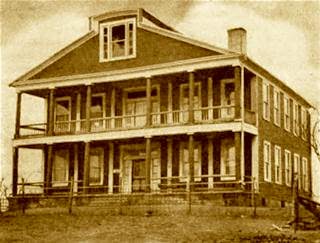 In 1829, Crenshaw and his brother, Abraham, bought the land where the Old Slave House would be built and broke ground in 1834. The house was finished in 1838. Crenshaw claimed the house was built for his wife, Sinia Taylor Crenshaw and their five children, but it was also used as a holding station for kidnapped free blacks before they were sent “down the river” and into slavery in the south. With Kentucky (a slave state) just across the river, it was easy to do.


The first and second floors of the house were furnished with European artwork and furniture, the third floor was constructed of thicker walls with over a dozen cells, about the size of horse stalls, all equipped with heavy metal rings and chains.  A whipping post was located at either end of the hallway next to the windows which provided the only light and air into the attic.

A secret wagon entrance was built in the back of the house where covered wagons carrying kidnapped blacks and indentured whites would drive directly in. Then those kidnapped would be taken up the back stairs to the third floor attic where they were imprisoned in cells, tortured, raped, whipped, and sometimes murdered.

Crenshaw created a reverse Underground Railroad in Illinois. He and his hired men would capture free blacks from the North and smuggle them across the river into Kentucky where they would be “sold down the river” into slavery in the southern states. Crenshaw even devised a slave-breeding program in the attic.   A slave named Uncle Bob was used as the stud breeder to provide Crenshaw with more “cargo” to sell off down south.

Crenshaw was finally indicted in 1842 for the kidnapping of Maria, his cook, and her seven children.  Because of his clout and financial standing in the community, he was found not guilty.  But people in the area began to talk and suddenly Crenshaw’s methods were being questioned.  His mill was burned and his standing as an upright and moral man in the community was waning.  Business in the salt works he owned began to decline as more profitable salt was discovered in Ohio and Virginia. Crenshaw watched as his empire dwindled.


Crenshaw died December 4, 1871, his wife, Sinia, in 1881.  Both were buried in the tiny, joined cemeteries of Hickory Hill and Lawler, located within sight of their former mansion. The cemetery was avoided by most and eventually fell into disrepair. It seemed a fitting note that Crenshaw’s stone was toppled off of its pedestal and was left laying flat in the ground for years. 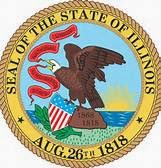 Then in December 2000, the State of Illinois acquired the house and two acres of land from George Sisk, Jr. In 2011, the Center for Archaeological Investigations at Southern Illinois University in Carbondale finished their historical, architectural and archaeological research and excavations of the property.

But no one appeared to care about the cemeteries. Vandals had done a lot of damage to the stones, and storms had wrecked havoc with falling limbs and uprooted trees.

When Angie Johnson, an Illinois native, found out that the cemeteries were in disrepair, she and her 16-member Good Samaritans Restoration team decided to step in and request permission to restore and preserve them. It took two years to get the paperwork in order for the Illinois Historical Preservation Agency before the group could begin but in 2013, Angie was granted permission to restore Hickory Hill and Lawler Cemeteries.


The actual restoration took place this past July. There were about 35 stones in the cemeteries and most needed some type of repair, restoration or cleaning. Angie and her team took it all in stride, dividing up into groups to do stone cleaning, stone repair, and the big jobs - replacing those monuments that had been toppled over.

Taking two weekends, the group worked on leveling, repairing, and hoisting monuments back in place.


When the team started the cemetery looked like this -


Today, the cemetery is back in shape, with straight, gorgeous monuments and stones; a beautiful  cemetery that encourages visitors to linger, and once again, demands respect.

Angie took preservation classes through the Illinois Historical Preservation Agency, learning how to do the restoration work, finding out about laws governing cemeteries, and discovering how to fill out the mountains of paperwork required to document the process. The Good Samaritans Restoration Group is made up of volunteers who give their time freely to repair and restore cemeteries throughout the state of Illinois. 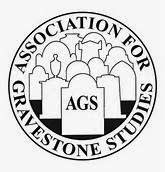 Angie Johnson has had an interest in cemeteries for years. She founded the Illinois Chapter of the Association of Gravestone Studies in 2012 and holds semi-annual Cemetery Crawls around the state as a way to acquaint others with the history and beauty of local and regional cemeteries.

You can keep up with her restoration activities on her website Walk Among the Dead Girl @ http://www.walkamongthedeadgirl.com or by visiting The Good Samaritans Restoration Facebook page @ https://www.facebook.com/pages/The-Good-Samaritans-Restoration/596631623753086.

In 2004, the National Park Service declared the Crenshaw House, also known as the Old Slave House, as a station in the ‘Reverse Underground Railroad Network to Freedom’ program, thus acknowledging the sadistic part that John Crenshaw played in condemning free blacks and indentured servants to lives of slavery.
While Crenshaw was not the only slave trader in the state of Illinois, he became the most notorious and the most ruthless in Illinois’ history.

Unfortunately, the state of Illinois has no plans to reopen the house. That's a shame since this sad part of the state’s history could make a powerful impact on visitors, and future generations.

It would be wonderful to see Hickory Hill and Lawler Cemeteries also gain protection under the National Park Service. Thanks to Angie Johnson and her team, these cemeteries have been restored and can continue to teach this, and subsequent generations, some powerful lessons.