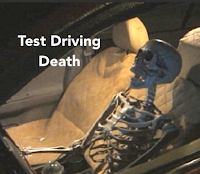 Just when you think you’ve heard it all, along comes yet another bizarre idea concerning death. This one originated in the Ukraine a few years ago, and was the brainchild of Truskavets coffin maker, Stepan Piryanyk.

Piryanyk decided that to combat the fear of being buried with “coffin therapy.” (He claims that each coffin has its own aura.) For $25, he’s offered people a chance to hop into a coffin and experience a glimmer of death. 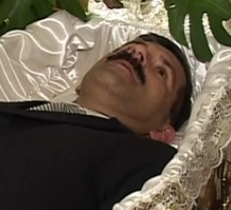 For their money, the customer receives fifteen minutes of lie-down time in a silk-lined coffin. There’s a soundtrack of a babbling brook playing, and it’s the guest’s choice to close the lid – or not. Piryanyk sees it as a way to “get used to the afterlife.”

Several people who tried coffin therapy reported that it was relaxing.

Piryanyk came up with the idea after he and his brother built a coffin couch for their grandmother so she could “slowly get used to eternity.”

A mental health clinic in China offers “death experience therapy.” The experience lasts from 4 to 5 hours (!) and costs around $320. While the patient is lying in the coffin covered in a shroud, family members read epitaphs and share memories.

The clinic reported that after the event is over, patients write down how they felt while lying in the coffin. Many are so relieved and happy to be alive that they vow to alter the way they live, promising to live life more in the moment.

Yet another report from China has psychological counseling patients lying down in a coffin in order to relieve their stress. Supposedly after spending a few minutes covered with a blanket, with the lid shut, they emerge from the coffin feeling “reborn."  Over 1,000 patients have experienced the therapy.

In Seoul, South Korea a “well-dying” course is offered for those who have decided not to “take life for granted.”  Customers put on a traditional yellow hemp robe and lie down in a wooden coffin in order to experience their worst fear – dying. Once the lid is put in place, people reported that their attitudes toward life changed; they suddenly realized what was truly important to them and emerged more appreciative of those near and dear to them.

A healing center in South Korea offers students the chance to understand the “death experience" by taking a class in it. The students don white robes, then listen to lectures as they sit at a desk next to their coffin. They then compose a farewell letter to their loved ones before posing in the coffin for a funeral portrait. They are then instructed to lie down in their individual coffins and await the “Korean angel of death” who walks by each casket and closes the lid, symbolizing that the student has died. The students spend about 10 minutes in their coffins, left alone to deal with “the nothingness of the afterlife.” 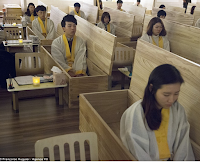 When the students “awake,” many have reported feeling liberated from their concerns, and refreshed.

In another weird turn of events, a Taiwanese professor reportedly buries his students (alive) in a coffin in the floor of his classroom. This is supposed to make them become more appreciative of their lives; more focused on “living every second.”

I have not found where any “death therapy” is offered in the U.S., but if it were, would you pay to try it? With the lid open, or closed? (And seriously, these reports are NOT part of an April Fool's joke. Life, at times, is just this weird ...)